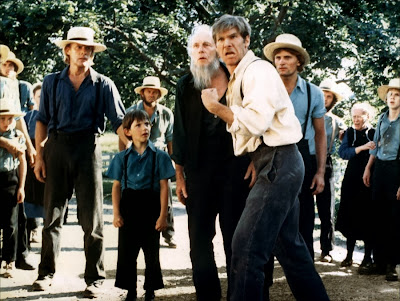 A pretty standard trope of the crime drama is the innocent witness. Have something bad happen, put someone completely unconnected in the area, and drama just happens. How do you twist things up? In the case of Witness, you make the innocent observer of the brutal crime as innocent as possible. In this case, our titular witness is a young Amish boy named Samuel (Lukas Haas). That little twist is enough to have garnered Witness eight Oscar nominations.

For what it’s worth, though, it really is an interesting premise. On his first trip to a big city, the young Amish boy and his mother Rachel (Kelly McGillis) are waiting in a train station when Samuel wanders off to the bathroom. It is there he sees a man assaulted and killed by two other men. The responding police officer is a man named John Book (Harrison Ford), who stashes his technologically backward witness and his mother at the house of his sister. The next day, he helps the boy look through mug shots with no success. During a lull, the boy wanders around the police station and finds the culprit he saw. The problem is that the murderer he saw is a police officer named McFee (Danny Glover).

Book tells his boss Schaeffer (Josef Sommer) about McFee being a dirty cop, with corroborative evidence that one of McFee’s major drug busts had all of the evidence go missing. When he is then attacked by McFee that night (and wounded in the gunfight), he realizes that Schaeffer is in on the dirt. Desperate and worried about the Amish, Book returns them to their home and promptly collapses from his wound.

What happens next is interesting, but not a surprise. Unable to return home since his boss is a dirty cop, Book hides out with the Amish, doing a very poor job of blending in with the local people. As it happens, he’s attracted to Rachel, who just happens to be a widow. Meanwhile, the Amish have trouble adjusting to Book as well. In particular, Daniel (Alexander Godunov), who is pursuing Rachel himself, is troubled by Book’s presence in Rachel’s home. While Book’s partner Elton Carter (Brent Jennings) tries to keep things under control back in the city, Book tries to heal and come up with any evidence he can against the dirty cops. And the Amish people, understanding that Book brings with him a great deal of the outside world, which causes a lot of potential problems for Rachel, who happens to be attracted to Book in turn.

I admit to being somewhat torn on this film. There’s a lot to like here. The story itself is a blend of pretty standard film tropes. It’s part fish out of water, part standard crime drama, part opposites attract romance. And yet it all works very well, in part because it’s very smartly put together. It’s more than just good performances. Sure the “good cop against dirty cops” film is common. While it’s a film you’ve seen in that respect, that doesn’t mean that there are excellent representatives of that particular genre, and this is one.

And yet, there are still places where those standard tropes are played too much as expected. When Book disappears, is it any shock that his partner comes under greater scrutiny? Is it a shock that the dirty boss uses all of his authority to make things difficult? Would you be shocked if Book’s partner didn’t survive to the closing credits? It’s at times like these that Witness feels like a standard film with the Amish people as the only attempt at creativity rather than doing something really new with the story.

The biggest issue I have here is the weak romance between Book and Rachel. It feels really forced. Sure, they might well be attracted to each other, but Rachel acts in a way completely different from the way she would were she a real Amish woman. Seriously, it simply doesn’t work in that sense. There’s no way a woman that repressed would, well, expose herself to an outsider. What might well have been considered the romantic moment of the film is one that works completely against the premise.

I rather like Witness despite the fact that it only pretends to break new ground, and the only real change from the standard film of this sort doesn’t go much deeper than the surface. It’s a solid story and it’s well told. It’s just not different enough to be much more than a curiosity. It was fun to see a very young Viggo Mortensen, but that doesn’t qualify as unique enough, either.

I admit to being somewhat torn on this film. There’s a lot to like here. The story itself is a blend of pretty standard film tropes. It’s part fish out of water, part standard crime drama, part opposites attract romance. And yet it all works very well, in part because it’s very smartly put together.

Why to watch Witness: A standard crime drama with a fairly unique twist.
Why not to watch: The romance angle feels like a forced afterthought.