Film: The Dark Angel
Format: DVD from NetFlix on laptop. 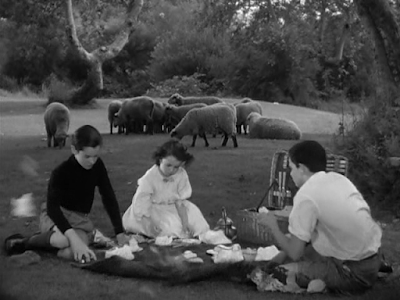 This quest to watch all of the Oscar nominated films in the categories I’m looking at takes me to some odd places now and then. It’s led me to a number of movies I’d never have seen and am happy to have watched, but it also leads me to many films where I find the nomination and even the film completely ridiculous. Such is the case with The Dark Angel. This is a film that makes me question pretty much everyone involved with it. Couldn’t they tell this was syrupy garbage? Was there so little self-awareness that the plot headed directly into the silliest of melodramas?

We start with our three principle characters as children. Kitty Vane (Cora Sue Collins), while about six, has already decided that she will marry one of the two boys who live next door. True to Hollywood standards, the boys who live next door are not Kitty’s age but are closer to 12. They are Gerald Shannon (Jimmy Butler) and Alan Trent (James C. Baxter). Kitty is already leaning toward Alan being her eventual husband. We get a little bit of hijinks with the kids and then we flash forward to the film’s present when marriage between Kitty (now played by Merle Oberon) and one of the two boys is much more reasonable.

However, the present of the film is also a present that involves World War I. Both Gerald (Herbert Marshall) and Alan (Fredric March) are set to go to war. And off they go. When they get leave, the two return home and both are obviously in love with Kitty. But she makes up her mind and chooses Alan. Naturally, Gerald is disappointed but puts on a brave face. Alan and Kitty plan to marry immediately but Alan is called to the front. On their last night together, the essentially play house. This is kept secret for Kitty’s reputation, but it is discovered that Alan has a girl in his room with him (gasp! Horror!) the night before the men ship off.

Back on the front, Alan asks for leave so he can return and properly marry Kitty. This is denied specifically by Gerald, who instead sends Alan out on a dangerous mission from which Alan does not return. Cue the violins.

Eventually Gerald returns home and tells Kitty his role in Alan’s evident death. He goes away to contemplate his guilt, but eventually he returns with plans to win Kitty back to him, which proceeds slowly. Meanwhile, Alan isn’t dead, of course. He was blinded in the attack and spent a good deal of time in a German prison, but he’s very much alive. However, knowing that as a blind man he’d be a burden, he assumes a different name and attempts to restart his life elsewhere on his own. He begins a career as an author of children’s adventure books, dictating his ideas. Eventually, of course, the three meet up again a few weeks before the planned wedding of Gerald and Kitty and Alan does his best to hide the fact that he is blind. Oh, cue the violins again.

If you can’t smell the melodrama coming off this film, I’m not sure that you have much cause reading a movie blog. And really, that’s all there is to the film. The entire second half of the film is Alan pining for his past life and trying to be noble. It absolutely drips with this sentimentality. It might well have played in 1935, but it doesn’t play now at all. It’s almost impossible to take this seriously.

Merle Oberon was nominated for her role in this glurgefest and I’m absolutely at my wits’ end trying to understand why. Oberon was, I freely admit, both stunningly beautiful and striking in a way that forces the audience to watch her when she’s on screen. But she’s not much of an actress, or at least wasn’t at this point in her career. I haven’t seen a great deal of her on screen, but I haven’t really liked one of her performances yet. This was her only Oscar nomination, and I think there’s a reason for it—we need more than a pretty face, regardless of how pretty that face might be.

Fredric March offers a fine performance for what it is. It’s not so much his character that I object to here but the screenplay that forces this character to act like an overly noble dick. Herbert Marshall, normally a pretty solid actor, seems completely out of place in this one.

Ultimately, The Dark Angel is a check in a box for me. There’s no reason I can think of that I would want to watch it again and except for those who feel the need to dig into Fredric March’s or Merle Oberon’s filmography to dig up everything need not show up here. Seriously, it’s not good enough to warrant watching and not bad enough to warrant laughing at. It’s just bland, and that’s the worst thing a film can be.

Why to watch The Dark Angel: You need to fill up a couple hours of your life.
Why not to watch: Its sin is greater than being really bad; it’s just very dull.