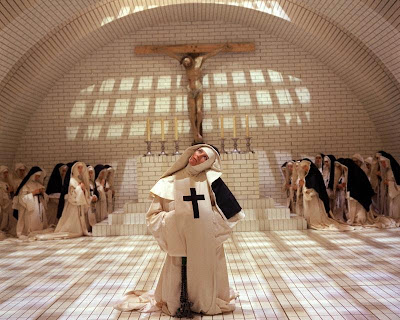 The biggest surprise for me in looking at Best Adapted Screenplay for 1971 is the omission of Fiddler on the Roof. As far as I know, the screen adaptation is both solid and completely accurate to the source material. Another miss is Willy Wonka and the Chocolate Factory, which might well have been bumped because this filmed version is vastly different from Roald Dahl’s book. The Devils would have been an interesting choice, but was probably too weird. I can also imagine a great deal of support for McCabe and Mrs. Miller. Get Carter and Shaft would have been fun additions as well. I’d love to suggest Harold and Maude, but evidently the novel was based on the screenplay, not the other way around.

5: The Conformist has been sold to me as a slick, modern French spy film. It sort of is, although it’s not really a spy film. The problem I have with it is that I have almost no memory of the film at all. It washed over me and left nothing behind, which is pretty much what I had to say about it the day I watched it. It’s all style, no substance, and that is definitely a shortcoming of the screenplay. We get a lot of promises here that simply aren’t delivered on at all. If I had to remove one film to make way for something better, this is the one that gets the axe.

4: Maybe I’m being petty, but winner The French Connection is getting bumped to here. I’ve seen this film a couple of times now, and for the life of me, I don’t get it. Oh, I mean I get the story and everything, but I don’t understand why so many people seem to think that this is one of the greatest films ever made. It’s a couple of cops chasing a couple of smugglers, and most of the film feels like Gene Hackman standing outside a restaurant watching another guy eat. The dialogue is supposed to be so memorable, and aside from picking feet in Poughkeepsie, I don’t remember any of it. This doesn’t bode well for when I get to Best Picture from this year, does it?

3: The hardest spot for me to pick was between 2 and 3. I ultimately went with The Garden of the Finzi-Continis here for no real reason other than I remember less of this than I do of the next film on the list. This is a very good film, and the writing is very smart all the way through. It’s complex without being complicated and has a number of plots and characters running through that are easy to keep separate and to understand as the film rolls on. This is a good nomination. It’s just not the best adapted screenplay of 1971.

2: It could be argued that The Last Picture Show is boring, but everything that happens in this film is happening below the surface. It is slow, but this film is smart enough to allow us to truly understand the characters at a very deep level, and it does this quickly. We’re never really surprised by what happens in the film, but it would also be a mistake to call it dull. Good screenwriting keeps us interested when it seems like we shouldn’t be, and that’s more or less what happens here. It’s a hell of a fine script. It’s just not the year’s best.

1: No shock that I’m giving this to A Clockwork Orange. If nothing else, Stanely Kubrick, who not only directed but also adapted Anthony Burgess’s novel should be commended for bringing such a unified vision to the screen. The book isn’t “unadaptable” as some other works are, but it’s not one that I would want to attempt. Kubrick keeps the strange language and makes it work. In a lot of ways, this should be a terrible movie, but it isn’t and much of that comes from how tight the screenplay is and how carefully it sticks to the story being told. Kubrick should have won a bunch of Oscars, and this should’ve been one of them.

Posted by SJHoneywell at 7:55 PM

Email ThisBlogThis!Share to TwitterShare to FacebookShare to Pinterest
Labels: 1971, A Clockwork Orange, Best Adapted Screenplay, Oscar Got It Wrong, The Conformist, The French Connection, The Garden of the Finzi-Continis, The Last Picture Show