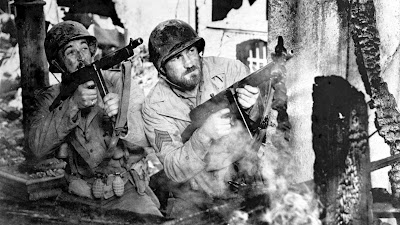 There was a time in the American past when being a journalist meant something. Reporters could legitimately be heroes to people, with men like Edward R. Murrow being top of the list. Another name to put there is Ernie Pyle, who was in many ways the first embedded reporter in military history. Pyle didn’t report on the war; he lived the war alongside the men who fought it, and won the Pulitzer in 1944 for his real front lines description of the war and, most especially, of the men who fought it. The Story of G.I. Joe, sometimes referred to as Ernie Pyle’s Story of G.I. Joe is an amalgam of Pyle’s experiences. The characters have been blended and changed and all of the names are different, but the experience is the same.

It’s worth noting that Pyle himself didn’t live through the war, or even long enough to see the final version of this film. Pyle was killed on Okinawa along with a number of the extras who worked on this film. To provide a sense of realism, actual soldiers were used in this film, many of whom went back to the front when the filming was done, and some of whom never left Okinawa alive. If evidence was needed that Pyle was the real deal, know that he wasn’t killed in a plane crash or a Jeep accident—the man was caught in a machine gun burst on the front lines next to combat troops.

The biggest strength of The Story of G.I. Joe is also the biggest weakness. There is no plot to speak of here. There are characters with particular arcs and desires, but the plot is more or less the overriding plot of the war—get to the end and defeat the enemy. We don’t get there in the film, we just progress toward it through the eyes and experiences of C Company, 18th Infantry. The film goes from the defeat at Kasserine Pass in Tunisia through to fighting across the Italian countryside later in the war.

Among C Company, there are a few troops who occupy our attention beyond the experiences of Ernie Pyle (Burgess Meredith) himself. Primary among these is the leader of C Company, Lieutenant (eventually Captain) Bill Walker (Robert Mitchum in his only Oscar-nominated role). Walker is a hard man who starts the war with the thousand-year stare and detached emotions of a man who has seen boys fight and die his entire life. Also in the company are Sergeant Warnicki (Freddie Steele), who wants only to get home to see the son he has never met; “Wingless” Murphy (John Reilly), who was too tall for the air corps; Dondaro (Wally Cassell), the Brooklyn native who chases women at every opportunity; and Mew (Bill Murphy) who has no family back home and so makes out his insurance policy to benefit the other members of his company.

As mentioned above, there is no real plot. There’s just life in the Army, the endless marches, the firefights battling house to house, frustrations, disappointments, and minor personal victories. There are losses along the way, moments of joy and humor, and an unspoken sense of genuine brotherhood. This, more than anything, is the real strength of this film. No one every overtly mentions the kinship they feel with the other men around them, but it is palpable in every frame. These are men who depend on each other for their lives and who gladly rush into danger for each other. Equally evident is Pyle’s intense admiration for them, a sense that while he gets the acclaim of the people back home, it is the men he stands next to who are the true heroes and the true people worthy of any honors he receives.

As such, Burgess Meredith is less important in the film as a character than he is as a conduit for the experiences of the war. It’s Mitchum who shines here. This is the sort of role that Mitchum was born to play. He had the face for it and more importantly, the manner for it. I can imagine that he was told to merely let his beard grow for a week before filming without much else needed to turn the man into a world-weary officer leading troops into battle.

For the person not really interested in war films, there isn’t a lot to be excited about with The Story of G.I. Joe. All it is is the war, with no overarching moral lesson, no significant battle to win, no grand enemy to overcome more than just the guys on the other side of the battle line. It’s just the men, trying to survive another day, hoping for mail from home, scheming to get some turkey and cranberry sauce on Christmas while suffering under yet another shelling barrage.

It’s a hell of a fine movie if this appeals to you, though. It manages to avoid much of the jingoism of the era, even avoids demonizing the enemy, and just presents the men as men doing a terrible job. For that it’s noteworthy. Because of Mitchum, it’s also very good.

Why to watch The Story of G.I. Joe: One of the first films to handle World War II from the perspective of the average soldier.
Why not to watch: Not a tremendous amount of narrative.