Not a Single Luxury

Film: Cast Away
Format: Streaming video from NetFlix on The Nook. 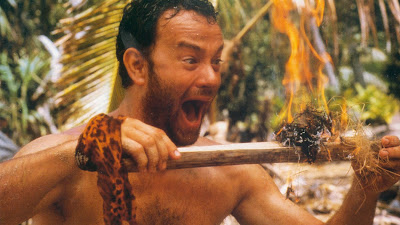 By 2000, everyone knew that Tom Hanks could be the leading man in a film. He’d done enough of them by that point, had won two consecutive acting Oscars, and had been the name above the title with enough critically acclaimed and box office-successful films that his star power was well known. The question Cast Away asks is whether or not Tom Hanks can be the sole focus of a film for a large part of its running time. Cast Away runs about 2 hours and 25 minutes, and the middle 75 are just Hanks either talking to himself or to a volleyball.

For what it’s worth, Cast Away is also a long advertisement for Federal Express, particularly the first 20 minutes or so. Chuck Noland (Hanks) works for FedEx resolving timing problems and finding more efficient ways to handle packages and systems. To do so, he travels around the world being all punctual and berating various levels of FedEx employees for being slow or not caring enough about time. Se see this initially in a visit he pays to Moscow, complaining that it took more than 80 hours for the package he sent from Memphis to reach him near Red Square. I’m immediately struck by the fact that it seems that a great deal of the time issue here didn’t specifically happen because of the Russian employees.

Regardless, Chuck gets back to Memphis where we meet Kelly (Helen Hunt), Chuck’s girlfriend and potential fiancée. Kelly is working on her Ph.D in…we don’t really find out. It’s implied that the main reason they aren’t married is that Chuck’s job takes him around the world on a moment’s notice and this interferes with their life together. As if to make the point, Christmas dinner is interrupted with an emergency in Malaysia. Chuck hops on the next outgoing FedEx flight to that area of the world.

Now, with a film called Cast Away, you know that something bad is going to happen on the flight. And something does. We never really find out what—in fact we’re told near the end of the film that it’s suspected that volatile cargo exploded, but no one really knows for sure. All that we do know is the plane crashes in the middle of the ocean and Chuck manages to survive. He literally weathers a bad storm and winds up the next morning in his rubber raft on a beach.

The heart of the film is Chuck’s learning to survive on his tropical and otherwise uninhabited island. We see his first stumbling missteps in hunting for food, dealing with a lack of fresh water on the island, and dealing with minor injuries. He also deals with the corpse of one of the pilots that washes ashore (this is mildly upsetting…no, really) and with an infected tooth. He also learns to make fire, eventually moves into a cave, and after what seems like too long a time, decides to open up the FedEx packages that wash ashore. He keeps one that is decorated with a pair of wings unopened as sort of a talisman.

This is also where we are introduced to Wilson, Chuck’s only “companion” on his island. Wilson, famously, is a volleyball that Chuck decorates to have a face. After his infected tooth episode, we doodley-doodely-doop ahead four hears to find that chuck has learned to survive pretty well, although he’s gone quite native. His life changes when the tide washes in a section from what looks like a Port-a-Potty. He uses this as a sail, rigs up a raft, and attempts to leave the island, where he is eventually picked up by a cargo ship.

The last act, more or less, is Chuck returning home and finding that Kelly has not only moved on with her life but has married and has a child. And just like at the start, this is where the movie loses me. I’ll get to this in a minute. Kelly, of course, is terribly upset that Chuck has returned while he learns to deal with the idea that one of the things that kept him going is evidently lost to him forever.

So let’s talk about Kelly’s marriage, because it really bothers me. When Chuck leaves the island, he scratches on a rock that he had been there 1,500 days. Assuming that’s at least close to right, he’d been there for roughly four years by the time he makes his escape. I don’t at all take issue with him returning to find that Kelly has moved on with her life. I simply object to the time frame. The baby is around a year old by my guess. Assuming she became pregnant after getting married, she’s been married a minimum of a couple of years. Assuming also a standard pre-marriage relationship…well, exactly how long did she mourn for poor, lost Chuck? Did she pick up this new guy at his funeral?

Look, I’m not trying to say that she should have waited around pining for him. Should I find myself on an uninhabited desert island for four years, I’d expect my family to move on, too. It wouldn’t shock me to find that my wife had gone on with her life. What I wouldn’t expect is for her to have been so quick to start a new relationship that she’d be already past her second anniversary. And were I to return, I wouldn’t expect her to give up her new life for me; I say this because Kelly is evidently willing to abandon her husband and child to be with Chuck.

There are nice touches here, like how completely tone deaf everyone around Chuck is upon his return. At his celebratory welcome home banquet, we see essentially a huge spread of seafood because that’s what everyone would want, and because no one would think that this is all Chuck had been eating for the last four years. One person even mentions wanting to take Chuck fishing, as if Chuck hadn’t had to fish for survival for the past Olympiad. I actually like these moments because they are so humanly ignorant of Chuck and so believable because of it.

But really, the third act pisses me off. Cast Away is surprisingly good up until the reunion with Kelly. If nothing else, the plane crash is worth the price of admission, because it’s really well done. Change that ending—make Kelly a newlywed, perhaps even pregnant—and I buy the whole thing. Without that change, she comes off as really callous (being willing to walk out on her own child adds to this), and it makes me wonder what he saw in her.

Why to watch Cast Away: It’s a pretty good story in spite of itself.
Why not to watch: If you don’t like Tom Hanks, you’re going to hate the second act a lot.