Film: The Collector
Format: DVD from NetFlix on various players. 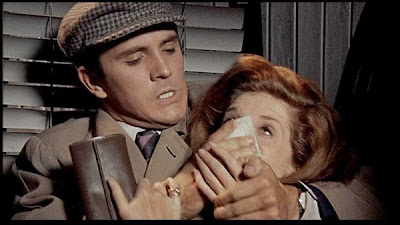 When I put together the post on Best Picture for 1965, I said that the one film I thought might eventually make the list for me as something I’d nominate was The Collector. Having seen it now, I wish I’d waited on Best Picture for that year, because this would absolutely make my list of top movies for that year, particularly in a year as weak on nominations as 1965. I’m not sure I’d pick it over The Battle of Algiers or The Shop on Main Street, but it may well be the best English language film of its year. I suspected that I’d like it. What I didn’t expect was a film this emotionally upsetting and, frankly, good. Why do films like this get lost in history? This is a film that (no joke) should be spoken of in the same sentence as Psycho and Peeping Tom.

As with plenty of thrillers, the high concept here is devilishly simple. A timid, socially awkward butterfly collector named Freddie Clegg (an almost disturbingly youthful Terence Stamp) wins a great deal of money in a football (soccer for those of us on the left of the Atlantic) pool. This allows him to leave his dead end job as a bank clerk and buy an old country house. Once there, he fixes up a basement apartment and, with the chloroform he uses to kill his butterflies, he kidnaps an art student named Miranda Grey (Samantha Eggar). She is someone he’s pined for from afar his whole life, and now, much like his butterflies, he has collected her.

And that’s really it. Miranda’s abduction happens in the first few minutes of the film. The entire film is the cat and mouse game between captor and captive. The entire film works entirely based on the performances of Eggar and Stamp. A good 90% of the film is either one of them or the two of them together, and most of time is spent in the room he constructed for her. Much of what happens is the deal making between the two of them.

Because of this, there are two main things that sell the film completely. The first is the performance of Terence Stamp. He is absolutely chilling in The Collector. Every move, everything he says is horrifying in so many ways. Stamp’s performance works because it’s completely subtle. He’s not an over-the-top madman. In fact, he’s almost prim. For much of the film, he appears exclusively in a suit and tie with the top two buttons of the suit coat fastened and frequently standing ramrod straight. For a kidnapper, he is remarkably polite, respecting Miranda’s privacy entirely despite his almost complete power over her. In fact, it’s his timidity that makes him so scary. There’s a sense that he will not react until he is pushed to a terrible breaking point, and then what he will do is anyone’s guess. He’s all the more terrifying because he seems so meek and almost likable, sort of like Norman Bates in the first and second acts of Psycho.

The second selling point here is the performance of Samantha Eggar, who is truly magnificent. She sells her part of the film almost immediately. Upon waking up in her basement prison, she slowly inspects the room that has been created for her—sink and toilet, toothbrush, comb, wardrobe and closet full of clothing that fits her. Slowly, the true horror of what is happening to her and about to happen to her dawns, and her slow build of terror is magnificent. Anything she does after that is immediately accepted because her first real opportunity to act is so damn good.

In fact, everything about the film works exactly as it was intended to work. Despite not wanting to, we begin to understand exactly what makes Freddie tick the way he does. When Miranda attempts to work her way free by seducing him, his timidity is understood completely and his reaction to this is both staggering and brutal, and her reaction to this sells the third act completely.

I should also mention that the film works equally well because both of our characters are very smart. Everything Miranda attempts to do to alert others to where she is and her particular danger is incredibly smart, smarter than a lot of people would be in that situation. And in every instance, Freddie is one step ahead of her because he’s as smart as she is.

The last 20 minutes or so of The Collector is particularly grueling. I won’t spoil it, even under a spoiler tag because it’s worth experiencing for yourself. For what it’s worth, though, the ending is truly astonishing given the year in which this film was made.

If you are at all a fan of thrillers, you owe it to yourself to find a copy of The Collector as soon as possible and watch it. More people should know this film and more people should be talking about it. It’s worth noting that William Wyler earned his 12th nomination for Best Director for this film, and he gave up the opportunity to direct The Sound of Music to do it. I’d be hard-pressed to say he made the wrong choice.

Why to watch The Collector: Psycho meets Silence of the Lambs.
Why not to watch: You get freaked out easily.

Posted by SJHoneywell at 6:01 PM