This is the second in a series of monthly reviews suggested by the guys at Your Face. This is Nolahn’s first pick. 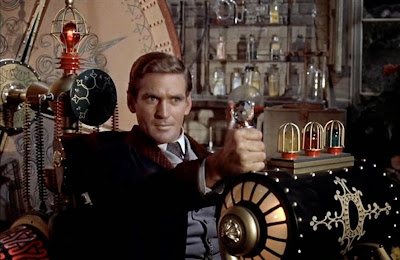 Once upon a time when the world was new and my age could be counted on my fingers, I saw a part of The Time Machine, one of the films Nolahn has challenged me to watch. It might feel like a cheat, since I know I’ve seen at least part of this, but I’m also fairly sure I never saw the whole thing. I’d remember the Morlocks if nothing else and I don’t remember them much at all. But I’ve definitely seen a part of it, but it was also at a time when I was still struggling with learning to make a cursive capital S and the president was either Ford or Carter. When it’s been multiple decades, I think it’s fair to call this a first watch.

The Time Machine is the first big-screen adaptation of the classic H.G. Wells story of the same name. A scientist named H. George Wells (Rod Taylor) has invited some friends over for dinner, but he’s late. The men are frustrated and hungry, but allowed to sit at the table when Wells bursts into the room, dirty, clothing torn, and raving like a madman. Naturally, the men are curious, so Wells goes into his tale about where he has been and the things he has seen.

Sherman, set the Wayback Machine for New Year’s Eve, 1899. Wells, with the same group of friends in attendance, demonstrates his new invention. He has made a small device that looks like a cross between Santa’s sleigh and a fan boat in miniature. This he places on the table in front of the men and flips a switch…and the machine disappears. Into the FUTURE! The men are skeptical, of course, with scoffing championed by Dr. Hillyer (Sebastian Cabot). Wells’s friend Filby (Alan Young) wants to believe, but is skeptical as well. Wells is disappointed, of course, but asks Filby to come to dinner six days hence and asks him to bring the others as well. He also promises that he will not leave his house that evening.

Of course, this means that Wells is going to try out his full-sized model of the time machine that is sitting in his workshop. And so he does, moving forward a few hours at first and noting that while his watch has registered only half a minute, the clocks in the room have jumped ahead a couple of hours. His goal in moving forward in time is to find a time in the future where warfare has been abolished, so naturally (following the science-fiction rule of threes), he stops by World War I, World War II, and a future atomic war (the rule of three being two known quantities with one fictional to continue the pattern). That future atomic war somehow manages to trigger a volcanic eruption in the heart of London, which traps him in rock for millennia. Finally hundreds of thousands of years in the future, Wells and his machine are again open to sunlight, and he stops in a year with a six-digit designation starting with an 8, so, a long way off.

Here he discovers the Eloi, a race of innocent humans who inexplicably still speak English. He realizes that there is something odd about their civilization when one of them, a woman named Weena (Yvette Mimieux) starts to drown and no one helps her. The Eloi don’t work, study, or do much of anything. They can’t read and know virtually nothing. And soon Wells discovers that this is because they are both figuratively and literally cattle for the other branch of humanity, the Morlocks, who live underground. And, of course, the Morlocks steal the time machine, forcing Wells to go underground to get it back.

There’s a lot the film gets right and a lot that it takes license with for the sake of the audience. The idea that English would still be the same language more than 800,000 years in the future, for instance, is silly when the average teenager has difficulties understanding the writings of 400-year-old Shakespeare. But this is the sort of goofiness that I can overlook for a film like this. Adding language difficulties into the second half of the film would serve no purpose even if it would be far more realistic.

I kind of expected the pacing to be a problem, but it really isn’t. We don’t get to the Eloi and the Morlocks until the film is more than half over, but it doesn’t really feel like it’s taken us that long to get there. The slow move through history at the start is actually pretty interesting. It’s at least as interesting as the Eloi and the Morlocks, and honestly, it’s far more interesting than the Eloi, who are all kind of drips. This includes Weena, who we’re supposed to like.

Where the film loses me a little is at the end, when it suddenly becomes an action movie. A gang of Eloi is herded into the caverns by the Morlocks to eventually be slaughtered and eaten. Since Weena is one of them, Wells goes in to get her and to rescue all of the people. What ensues is a long hand-to-hand battle with the Morlocks that was missing only the Kirk/Spock fight music to be complete.

Nonetheless, for all its silliness and bad science, there’s a charm here that’s hard to deny. I like science fiction from this era because it’s always so much more ambitious than the technology allowed. If you can look past cheesy effects and some terrible scientific logic, this is really entertaining. Do it for the Morlocks.

Why to watch The Time Machine: A great version of one of the classic science fiction novels of all time.
Why not to watch: Scientifically goofy.