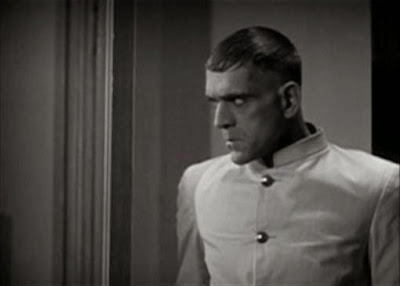 A film like The Criminal Code is evidence that the American movie-going public has been fascinated with crime films pretty much since there have been films, or at least talkies. As it happens, The Criminal Code is a decent example of a prison film, albeit one filled with what would become every prison movie stereotype in existence. The power of this film is dimmed significantly by the fact that it was released around the same general time as Little Caesar and The Public Enemy, both of which are superior in all ways. Still, for what it is, there’s some fun to be had here.

We start with Robert Graham (Phillips Holmes), a young man who has just turned 20 and has also gotten himself into a lot of trouble. Another man paws Graham’s date in a speakeasy, so Graham retaliates with a bottle upside the guy’s head. Unfortunately for Graham, this kills his victim, and even with a plea bargain down to manslaughter, Graham is sent up for ten long years in prison.

We jump forward six years and find Robert Graham a broken man forced to work in the prison’s jute mill (yes, jute is a real thing. Look it up). While still young, he’s come to the end of his rope and falls even deeper into despair when he learns that his sainted mother has died. He is prevented from getting into trouble by his two cellmates, Fales (Otto Hoffman) and Galloway (Boris Fuckin’ Karloff!). Fales has a plan to get out and initially, Graham wants to go with him. Galloway refuses. He’s back in prison for breaking parole by having a beer. As it happens, the man who busted him and got him sent back for a dozen years is Gleason (DeWitt Jennings), the guard captain.

Soon after all of this, a new warden is named to the prison. This is Mark Brady (Walter Huston), who happens to be the former DA. In fact, Brady is responsible for the incarceration of a good number of his inmates, including Robert Graham. However, Brady isn’t a bad guy despite being a classic fast-talking Howard Hawks character. When he learns that one of the inmates (Graham) is soon to be a broken man and lost forever, Brady moves him from the jute mill and more or less hires him as a personal assistant and driver, which is a hell of a lot of trust for an inmate. It’s worth saying here as well that Brady’s daughter Mary (Constance Cummings) evidently likes hanging out at the prison, and it’s not too long before young Bob Graham is enamored of her and she is fond of him. You seriously couldn’t do a movie in 1931 without someone getting a girl at the end.

Anyway, Fales makes his escape attempt but is caught. When he resists arrest, he is gunned down by one of the guards. This happens because the plan was ratted out by an inmate named Runch (Clark Marshall). Now the whole prison wants Runch’s blood, and the task falls to Galloway to exact revenge. He does, but Graham walks in on the murder. However, he decides to follow the prisoners’ code and refuses to rat out his former cellmate. This is despite being promised a parole for his good behavior and because, well, Mary Brady is sweet on him.

The Criminal Code isn’t a great film by any stretch of the imagination, but it is a decent one for its time. I can imagine that a movie-going audience in 1931 would have found quite a bit of this pretty compelling. One of the great things about it is the cadaverous presence of Boris Karloff, who played a lot of roles like this one in his pre-Frankenstein days. Karloff in the day looked like a natural thug. In fact, a great deal of what made him work as the Monster seems to have been done here as well. His arms look like ape arms in length, and he looks ready to kill anyone who comes near him.

What surprised me the most is that I expected this to be a film where the poor somewhat innocent Bob Graham is tossed into prison and terrorized by someone like Galloway. This isn’t the case. In fact, with the exception of Runch, all of the prisoners seem to get along pretty well with each other. In a lot of ways, prison doesn’t look that much different from the way films of the same era make boot camp look.

In a world where we can more easily find and watch other early crime films like Scarface: The Shame of a Nation or even I am a Fugitive from a Chain Gang, there’s no real reason to seek out a film like The Criminal Code. If you do find it, expect it not to knock your socks off, but do expect that you’ll have fun watching it. Anyway, how much reason do you need beyond the presence of Boris Karloff?

Why to watch The Criminal Code: Boris Motherfuckin’ Karloff.
Why not to watch: Why the hell does a prison film need a romance?