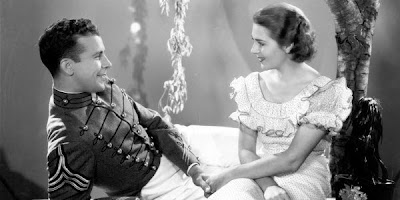 There was a time in the past, specifically between the two World Wars, when Hollywood had a strange relationship with the U.S. military. It seemed that the military would assist with virtually any movie no matter how silly the premise provided that the military be shown in a positive light. It’s the only explanation for a film like Flirtation Walk. This is a film with a completely ridiculous premise and I can’t but think that it was made with some cooperation on the part of the U.S. Army.

Richard Palmer Grant Dorcy (Dick Powell) is a private in the army. He’s stationed in the Hawaiian Islands where he has a playfully argumentative relationship with “Scrapper” Thornhill (Pat O’Brien), his sergeant. Dick, who goes by the nickname “Canary” because of his penchant for singing (yep, it’s one of those), hates taking orders from Scrapper. Scrapper’s opinion is that Dick should try to become an officer and make something of himself, a future that Dick absolutely can’t see for himself.

Everything changes when Dick is assigned as the driver to Kit Fitts (Ruby Keeler), the daughter of General Fitts (Henry O’Neill), Dick’s commanding officer. Kit forces Dick to drive her off the base to see a real Hawaiian luau, and the two more or less give in to the moonlight and the party. Dick sings a song and the two end up in each other’s arms only to be discovered by Kit’s sort-of boyfriend, Lieutenant Biddle (John Eldredge). Concerned for Kit’s reputation, he’s going to bust Dick with a court-martial and Dick plans to desert. Scrapper straightens things out—Kit writes a note to Biddle clearing Dick of any wrongdoing and she tells Dick that there’s nothing between the two of them.

And here’s where the movie starts to lose the thread of a legitimate plot. Dick, incensed that Kit doesn’t reciprocate his feelings, decides that he’s going to go to West Point and become an officer. Yep. That’ll show her.

And so off we go to West Point where Dick excels as a cadet. We get some good-natured hazing from the older students, hazing that Dick duplicates for students that follow after him. And then, in his final year, what should happen but a Hollywood exclusive coincidence? General Fitts is reassigned to West Point, meaning that suddenly Kit and Dick are reunited. The two have never forgotten each other. Kit would love to reestablish that relationship but Dick has decided that Kit is beneath him. Everything comes to a head when the cadets put on their traditional Hundredth Night performance. The other cadets argue that they should get Kit to star in it along with Dick, which means the two will share the stage and will eventually be forced to kiss each other and everything.

Like I said at the top, the military was evidently willing to hand over any and all help for any premise possible provided that the military branch in question comes out smelling like a rose. Few films have a premise as completely goofy as this one. Seriously, Dick goes to West Point and completely realigns his life because a girl he spent a couple of hours with told him that she didn’t love him.

Beyond that, we’re asked to believe that Ruby Keeler is a goddess who will turn the heads of every man who sees her. Don’t get me wrong—she’s cute, but she’s hardly Garbo. However, you wouldn’t know that based on the reaction of the various cadets’ reactions to even the glimpse of her. The act like cartoon characters seeing a bombshell when she enters a room. It just doesn’t work on any level.

There are parts of the film that are entertaining, I guess. Scrapper is a fun character, and when Dick goes off to West Point, Scrapper takes “Sleepy” (Guinn Williams) as his new corporal. Sleepy is pure comic relief and has a couple of good, albeit predictable lines. The same is true of Dick’s West Point roommate Oskie (Ross Alexander), who is straight out of central casting but good in the role he’s given.

Ultimately, there’s a reason that Flirtation Walk is unknown these days. There’s no good reason for anyone to spend time on this film unless he or she is a completist for Best Picture nominees, Ruby Keeler, or Dick Powell.

Why to watch Flirtation Walk: The military at a much more innocent time.
Why not to watch: It doesn’t even live up to its dumb premise.