It's Better to Burn Out than to Fade Away 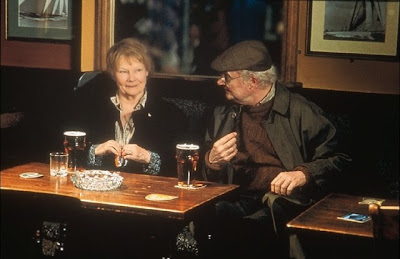 A film like Iris is one where I understand all of the nominations, wonder why there weren’t more nominations, and even understand the importance of the film. What I don’t understand is why someone would see a film like this in the theater. Iris is an astonishingly intimate film; I can’t imagine that it would be better seeing these characters blown up to gigantic proportions on the screen. Admittedly, when I pay for a movie, I want to see explosions and special effects, so I may be biased. There is a part of me that thinks a film like Iris only improves the smaller the screen gets.

This is the story of Iris Murdoch (played in the present by Judi Dench and in flashback by Kate Winslet). Iris is a renowned novelist, speaker, and philosopher who, as the film begins in the present, is succumbing to the ravages of Alzheimer’s disease. Yes, this is going to be that kind of movie. We spend time equally in Iris’s increasingly murky and muddy present and her vibrant and exotic past. In both places, much of the story revolves around her romance with John Bayley (Jim Broadbent and Hugh Bonneville) and the contrast between those two different times in Iris’s life.

The young Iris Murdoch is, or at least was for her time, something scandalous. She was opinionated, sexually experimental and open, and completely willing to experience whatever the world had to offer her. By contrast, John is painfully shy and speaks with a charming stutter, is almost stereotypically repressed in that stammering English way, and immediately comes under the complete sway of Iris’s powerful personality. While Iris sees something in John, it’s evident that she looks for such things in everyone. John, though, becomes completely devoted to her and essentially dedicates his life to basking in her impressive shadow.

And of course, we have a similar but opposite situation in the modern day. John is just as devoted to Iris in her period of decline, but he has suddenly become the dominant personality in the relationship. This is tragic, of course, and the film is not shy about the tragedy of this vibrant, intelligent woman famous for her novels and incisive mind being reduced to someone who can barely speak and who seems to be reduced to having the mind of an infant.

Iris is smart enough to show us the tragedy without forcing it, except for in its very string-heavy soundtrack. The story that we’re given is more than enough.

Three of the principal actors—Dench, Broadbent, and Winslet—were nominated for Oscars, with Jim Broadbent winning. Broadbent won for Supporting Actor, which may have been the cause of Hugh Bonneville not being nominated at all, which is a terrible shame. Bonneville’s performance manages to match Broadbent’s moment for moment; he has the same mannerisms, the same gait, and the same style of expression. He even looks like a much younger version of Jim Broadbent in this film.

All four of the performances are top of the line. Kate Winslet and Judi Dench seem to be good in everything they are in, and both of them give performances that are noteworthy in careers filled with such performances. Judi Dench in particular is magnificent without being maudlin. It would be easy for this role to turn into the sort of Lifetime movie of the week, but she keeps it real, and because of this, it’s all the more tragic. This is a film that aims for and hits the reality of this situation, not the Hollywood version of a personal tragedy.

Is there a problem with Iris? Yes and no. I’m loath to get all sappy here, but this is a film of true emotional power. It’s hard not to get choked up watching and seeing these flashbacks to the enormous love these two people had for each other and the enduring love and commitment John feels for Iris as she declines into something so different from what she was. That’s the entire point of the film, after all. But man! It’s so damn sad!

Again, I don’t want to get maudlin here, but it’s difficult not to. Iris manages to hit its tone perfectly. An inch one way and the film doesn’t strike the tone it needs to for it to be effective. An inch in the other direction, and it turns into sap. Instead, it hits this perfectly, showing all of the pain and all of the heartbreak and all of the encompassing love. I sound like a goof saying this, but it’s true. Iris tells this story with a dedication to reality rather than sentimentality. It could so easily be contrived, and it never goes there.

It’s a hell of a good film. Just be prepared to end up using your sleeves when you run out of tissue.

Why to watch Iris: A truly human story of beauty and tragedy.
Why not to watch: A standard box of Kleenex won’t cover it.