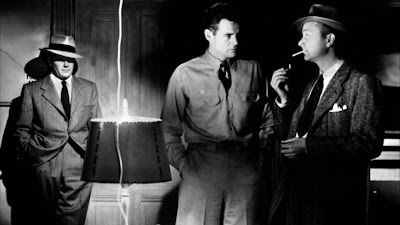 This might not be entirely accurate, but in a lot of ways, I think Crossfire is the oddest film I’ve seen in a long time. This is a film that is very much a film noir at its heart, but it ends on something like an up note. We know mid-way through the film exactly who the real bad guy is, and it’s the person we suspect in the first fifteen minutes. Once we know that, the second half of the film is more or less us watching the characters come to the conclusion we’ve reached, and the last 20 minutes or so are just seeing a set trap come together. And yet, for all of these oddities and (at least in my opinion) flaws in the script, Crossfire actually works pretty well.

It’s also, oddly enough, the second of the four Best Picture nominees from 1947 I’ve seen so far that deals overtly with anti-Semitism. Gentleman’s Agreement is all about anti-Semitism as well, although it’s of a much more genteel, “not in our club, dear” variety. Crossfire, as befits a film noir, is about murder and hatred. Curious that most of our characters are in the military, and one of them turns out to be the killer.

We’re dealing with a collection of soldiers who have just been released from the army. One of this is Mitchell (George Cooper), an artist who more or less wants to get back to civilian life and who is desperate to be reunited with his wife. While at a bar with a couple of others, including the loud and brash Montgomery (Robert Ryan, nominated for Best Supporting Actor), Mitchell ends up speaking with a man named Samuels (Sam Levene).

No problem, right? Except that Samuels is soon discovered dead, and Mitchell was one of the last people to speak with him. Thus begins a pair of investigations into what really happened. The first is conducted by the police and headed by Captain Finlay (Robert Young). The second is in the hands of Sergeant Peter Keeley (Robert Mitchum), a friend of Mitchell’s and a man convinced that his friend is incapable of cold-blooded murder.

It’s not too long into the film, thanks to a series of flashbacks, that we’re pretty much convinced that Mitchell didn’t do it, either. Mitchell, as already mentioned, is desperate for his wife, but instead ends up with Ginny Tremaine (Gloria Grahame, also nominated for this role), a dancehall girl who, for whatever reason, finds something interesting in this drunk and desperate ex-soldier. In the flashbacks, we also learn that Mitchell spent some time at Samuel’s house, and that eventually Montgomery and his friend Floyd Bowers (Steve Brodie) show up as well, and are still there when Mitchell leaves. If you think this suggests that Montgomery is the killer, I’m not going to say you’re wrong. That’s not even a spoiler, because this is precisely where we’re being lead, and the film with still an hour or so to go.

Anyway, the second act concerns Keeley and Mitchell playing hide-and-seek from the police and Montgomery trying to cover his own tracks and make sure that any possible heat being applied is being applied to Mitchell instead of himself. We find out precisely the identity of the killer with a good amount of running time left, and everyone else figures it out just in time for the third act to show up and give us a trap to catch the bad guy. This comes with the realization that Samuels was killed specifically because he was Jewish.

Crossfire more or less works in spite of itself. There are a lot of potential problems here, and not all of them are dealt with very accurately or coherently. Still, for the most part the film works. It’s surprising in the sense that when there were 20 minutes left, I honestly wondered not what was going to happen, but how it was going to take up all 20 of those minutes. It does, with some padding.

Robert Mitchum is good here, as he always seems to be. Once the police figure out the case, though, Mitchum is gone from the film and Crossfire is the worse for it. Mitchum is terribly underused here. We spend a great deal more time with Robert Young, and that’s not a good trade. Young, while a capable actor, is also one of the blandest human beings to ever spend time on any sort of screen. He’s capable in the role, but his presence on camera is a long, slow, extended yawn. He’s a likable enough guy, but he’s also entirely forgettable. In fact, the only thing I really remember about the character is that he smokes a pipe incessantly.

Ultimately, I kind of wonder about a film like Crossfire, which ended up with five nominations, all for major categories. It’s an interesting story, I suppose, but it also seems so strange. The entire sequence with Gloria Grahame’s character, initially there to be something that exonerates Mitchell, turns out to be a massive red herring and completely pointless to the plot. And even when it again feels like it might be relevant, it still isn’t. Grahame’s character and her boyfriend/husband/annoying guest (Paul Kelly) could be cut from the film completely with a loss of maybe 15 minutes of footage and not a scrap of the plot. And that’s in a film that runs just under 90 minutes.

I liked Crossfire well enough, but it’s a hard film to recommend or even to take very seriously. Everything about it just feels about 10 degrees off plumb.

Why to watch Crossfire: Robert Mitchum is always worth your time.
Why not to watch: So much of it feels completely irrelevant to the actual story.