Fly Me to the Moon

Film: Kaguyahime no Monogatari (The Tale of Princess Kaguya)
Format: DVD from NetFlix on laptop. 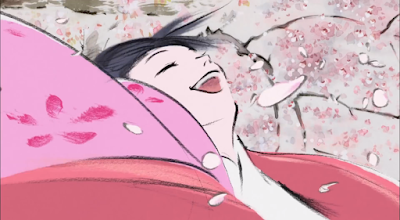 I can’t say that I was terribly excited about watching Kaguyahime no Monogatari (The Tale of Princess Kaguya). There’s a part of me that is still upset about The LEGO Movie being passed over for an Oscar nomination for Best Animated Feature this year. It seems like there’s always a foreign animated film or two that gets a nomination. It feels sometimes like it’s a sop to the idea that foreign animation exists. In truth, I have generally liked these non-American animated films across the board, so my initial trepidation here isn’t really that explainable.

But it was real. It took me several days to even think about putting this in the drive and watching it, and even then, I didn’t get past the first menu for another 24 hours. I’m reminded at times like this that I should probably trust more. The entire reason for this blog was to open me up to new cinematic experiences, so it’s not really in keeping with this blog’s raison d’etre to back off from something when the opportunity presents itself.

So let me get this out of the way here—I was an idiot for letting this sit for three days before watching it. The Tale of Princess Kaguya is a unique visual experience and also manages to tell an interesting story that is both traditional of its culture and very different from the sort of story we expect in the West. The story is only one of the selling points here, and it’s not the biggest selling point.

Still, I like to talk about story, so that’s what I’ll do for a few paragraphs. One day a bamboo cutter (James Caan) is out in the forest one day and discovers a glowing bamboo shoot. It opens up and reveals a tiny girl. The bamboo cutter immediately assumes that she has been sent from heaven and takes her home to his wife (Mary Steenburgen, who also serves as the narrator). They begin calling her Princess, but she is nicknamed by the local children Little Bamboo because she grows at an astonishing rate.

As Princess/Little Bamboo (Chloe Grace Moretz) grows up, she begins to take an interest in the world around her. While her family is poor, as are the families of the local woodcutters, she is happy with her life and particularly with Sutemaru (Darren Criss). At this time, the bamboo cutter makes a few more discoveries in the bamboo patch including a pile of gold and a great deal of beautiful fabric. From this he deduces that Princess truly is a princess and that she should become a member of the nobility in the capital. He thus uproots his family and moves, building a huge house and essentially advertising the presence of his daughter. It is here that she goes through a naming ceremony and is officially named Princess Kaguya.

Princess Kaguya attracts suitors from all over Japan, including a number of important government officials, who compare her to various treasures. She demands that to wed her, they must each return with the treasure they have named. This leads to fraud, cowardice, and in one suitor, death. At the same time, Kaguya rebels against her teaching from Lady Sagami (Lucy Liu), since being a proper princess means no longer running, laughing, or having fun. Eventually, she attracts the notice of the Emperor. Fearful, she begs for help from the spirits of the moon and discovers the reality of her existence and what that reality actually means.

It’s actually quite a lovely story even if it doesn’t end the way we might wish it to after a lifetime of Hollywood endings and animation that guarantees the happiest of all possible worlds. As it happens, I rather like the ending here and will get to that in a moment.

While the story is good and unique in many ways, it is very much the art here that is the biggest sell for the film. Frankly, this is a truly gorgeous film. The art is wonderfully simple in many respects. Frequently, we are given something that is more or less an impressionist version of a landscape or the characters; faces are indicated by a few simple lines, and whole fields of flowers are blotches of vague colors. It’s very effective and beautiful. In one of the more striking sequences, Kaguya runs from a party, represented by fierce swaths of color and charcoal lines to indicate speed and movement and fury. It’s simple and absolutely stunning in its simplicity.

I also love the ending, because it speaks to the themes of the film overall. What happens with Princess Kaguya speaks to themes of family, love, duty, loss and longing. It does this with a great deal of heart and compassion. It’s a wonderful conclusion.

In other words, I’m pretty confident that this belonged as one of the nominees for 2014, even if I still think The LEGO Movie should’ve been nominated and should’ve won.

Why to watch Kaguyahime no Monogatari: It’s holy shit pretty.
Why not to watch: No good reason, really.