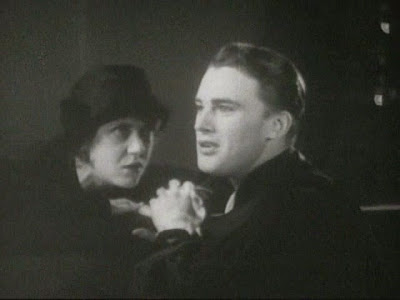 I sometimes have to force myself to watch some of the older films on my lists. There are certainly some films from the early years of the cinema that are worth watching, but plenty of these early films are tough watches. Madame X is sadly one of the second sort. I knew within the first five minutes that this was going to be a difficult watch for its entire running time. It’s not merely the melodrama; it’s the insane overacting. Anyone who put together a performance like Ruth Chatterton does in this would be laughed out of the theater today.

So brace yourself for plaintive violins and extreme drama. Madame X tells the story of Parisian woman Jacqueline (Chatterton), who is the definition of wanton in the late 1920s. How is she wanton? Well, despite being married and having a son, she also (gasp) has a lover. Her husband Floriot (Lewis Stone) has realized this and has kicked her out of the house. We actually start five years into this story. The boy is ill and Jacqueline tries to get in to see him. Floriot refuses her entry, though, and banishes her from his house.

Shortly thereafter, Floriot is visited by his friend Noel (Holmes Herbert), who has just returned from New York. He hears the story of what has happened with Jacqueline and confesses that he left Paris specifically because he was in love with her and wanted to forget her. He convinces Floriot to look for Jacqueline, but by this time, Jacqueline has left the country.

We get a little of Jacqueline’s wanderings. She follows a few men around the world, spending time in the South Pacific, China, and South America and becomes addicted to absinthe in the process. Eventually, she winds up with Laroque (Ullrich Haupt), who is a criminal. Laroque takes Jacqueline back to Paris with him for one or another of his nefarious plans.

In the meantime, since this has taken about 20 years, Jacqueline’s boy has grown up and become Raymond (Raymond Hackett), newly admitted to the bar. And, it turns out that Floriot is now the Attorney General. Laroque discovers the identity of her former husband and decides that he’s going to blackmail both Floriot and his son. Realizing what is at stake, Jacqueline shoots him dead on the spot and is immediately taken into custody.

Oh, goodness, but Madame X couldn’t be any more melodramatic if someone had a Snidely Whiplash moustache and tied a damsel to a railroad track. All of the performances are overblown, particularly that of Ruth Chatterton in the first half hour of the film. When she is attempting to see her son, you can cut the melodrama with a knife.

Fortunately, Chatterton’s performance improves as the film goes on. No one else seems to get the message, though, and the rest of the cast treats the material as if their lives depended on it. This is almost certainly a function of this film being an early talkie—it was advertised as “all talking,” which is a pretty good indication. I would imagine that plenty of people in the late 1920 found this quite engaging.

But a modern audience won’t, in general. The version that I watched has extremely muddy sound through large chunks of it. It could stand to be remastered, but probably hasn’t been because it isn’t worth it. Nobody cares enough to do it, and I can’t say that anyone should—it’s not even really a curiosity. It’s just overwrought and dull.

Why to watch Madame X: You have a little time to kill.
Why not to watch: It's so dull I forgot these tags for more than a month.