Film: Wag the Dog
Format: DVD from NetFlix on laptop. 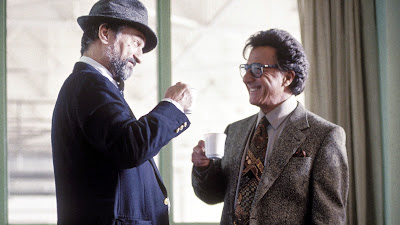 In the movie Angel Heart, Robert De Niro essentially plays Satan. He’s also played a laundry list of thugs, hitmen, and mob bosses. I bring that up, because it’s entirely possible that he has never played a darker character than he does in Wag the Dog. That this film is a comedy only enhances De Niro’s genial evil in it. If that sounds like I’m complaining, I apologize. The fact that De Niro’s character is so likable and amiable makes it easy to ignore the fact that he is also terrifying. Once it’s realized exactly how scary he is, the fact that he seems so decent only makes him more evil.

Wag the Dog is a political drama/comedy that is also one of those great examples of life imitating art. In the film, the sitting president is implicated in a sex scandal a couple of weeks before his potential re-election. This causes his team to go into overdrive to create a different news story to take the media feeding frenzy off the sex scandal. Wag the Dog was well into production when the Clinton/Lewinsky scandal broke, and when that scandal was followed in short order by the bombing of a Sudanese pharmaceutical factory, well, it was hard to prevent comparisons.

Wag the Dog does a lot of things right. We’re never really told the president’s political party (although it’s implied that he’s a Democrat in a few places). In fact, we never really see the president much at all. We hear his voice at one point and see a blurred image on a television monitor, but the president isn’t important here despite his being at the center of every event in the film. Instead, the focus is on the spin team who manufacture, produce, and sell a series of events to the American public to keep the president’s numbers high en route to the election.

The sex scandal breaks at the start of the film, which gives us an introduction to Conrad Brean (Robert De Niro), a political spin doctor. Brean meets with the president’s advisory staff including Winifred Ames (Anne Heche) to see what can be done about creating news stories to cover up the scandal. Brean starts floating out a series of smoke jobs including the production of the mythical B-3 bomber and terrorist activities in Albania. Why Albania? “Why not?” is Brean’s response.

To assist with the selling and packaging of the war to the American people, Brean and Ames enlist the help of Hollywood producer Stanley Motss (Dustin Hoffman). Motss calls in his own team of experts: creative consultant Liz Butsky (Andrea Martin), a marketing expert known only as the Fad King (Dennis Leary), and a somewhat mentally vacant songwriter named Johnny Dean (Willie Nelson). The team starts to put together a series of ideas to market the war, including patriotic items and theme songs as well as faked news footage of an “Albanian” girl (Kirsten Dunst) running from terrorists. Amping up the level of fakery, the girl is filmed holding a bag of Tostitos while running on a sound stage. This becomes an Albanian village complete with destroyed buildings and sirens, while she runs away holding a kitten.

Eventually, the CIA gets involved in the person of Charles Young (William H. Macy), who eventually decides to keep a lid on the story to keep up the funding and power of his own agency. But when the CIA announces an end to the hostilities a good week before the election, more is needed. Enter Sergeant William “Old Shoe” Schumann (Woody Harrelson) as a member of a covert force captured by the Albanian terrorists. Schumann’s “plight” keeps the news off the scandal and allows for the triumphant return of a military hero, except that Schumann is actually a military prisoner and is criminally insane. And when things start going the way they should for the president, Stanley Motss suddenly wants public credit for producing this masterpiece.

For what it’s worth, Wag the Dog may well be the most sardonic look at both Hollywood and Washington ever produced. While often extremely funny, it’s also incredibly dark and ugly. That’s exactly what it’s supposed to be. We get sucked into the story and even root for the “good” guys here while simultaneously coming to the realization that this sort of manipulation probably does happen to a certain extent. Conrad Breans do exist in the world, and these are people who will casually start a war and kill off innocent people for a 2-point rise in the polls. When I said at the top that De Niro’s character in this film might be the most evil character he has played, I wasn’t kidding.

There are good performances all around here. De Niro is great, and Anne Heche, who I normally have not much opinion on, is good. I actively dislike Dennis Leary in general, but he’s effective here in a small role. Willie Nelson is brilliant casting, and one of the better parts of the film is an impromptu duet between him and Pops Staples creating a song about an old shoe to be used as propaganda—after it’s slipped into the Library of Congress archives, that is. Woody Harrelson is both comic and menacing, sort of Natural Born Killers meets Kingpin.

But it really is Dustin Hoffman, who was nominated here, who steals the show. He’s perfect in every frame, completely believable in the role of a man who is supremely good at his job and completely self-important because of it. Stanley Motss is comic not because he’s over the top or a caricature, but because he’s exactly what we expect a Hollywood producer to be.

I enjoyed this film a lot. I’m not always one for the laugh-out-loud comedy. When it’s a comedy that makes me grin but also think, it’s right in the wheelhouse, and this one hits the sweet spot dead-on.

Why to watch Wag the Dog: A skewering of both Hollywood and Washington.
Why not to watch: You may not like where the thoughts of this take you afterward.