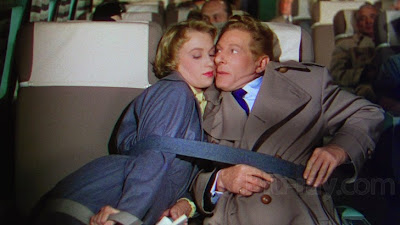 I’ve heard of Danny Kaye, but aside from White Christmas, I’m not sure I’ve seen a single one of his movies before watching Knock on Wood. I more or less knew what to expect, though. Unlike many of the song and dance types of the era, Kaye was pretty much a straight comedic actor specializing in light comedy with a few songs tossed in. That’s certainly what we’re getting with Knock on Wood, which manages to spoof the spy genre, more or less prank the film Dead of Night, and still toss in a couple of songs and a romance. And, as befits a comedy, the goal is to leave with a smile on the collective face of the audience.

American ventriloquist Jerry Morgan (Danny Kaye) has a successful act but a staggeringly unsuccessful love life. Every time he gets serious about a woman, his alter egos Clarence and Terrence open their mouths and say terrible things about his latest flame, ending the romance immediately, and Jerry tends to then take out his rage on his dummies. His manager Marty (David Burns) is convinced that the best thing for him is to meet with a Swiss psychiatrist, so off they go.

What Jerry doesn’t know is that the man who fixes his dummies is also involved in a spy ring. Needing to get plans outside of the country immediately, he uses Jerry’s twin dummies to hide them, one part of the plans inside the head of each dummy, making Jerry an unwitting courier.

This is the type of comedy that trades on running as broad as possible, which means we’re going to get a series of wacky hijinks along the way. The flight and much of the hotel stay is concerned with repeatedly putting Jerry into close, embarrassing contact with an unknown woman who turns out to be a colleague of Jerry’s new psychiatrist. This woman is Ilse Nordstrom (Mai Zetterling), who is likely convinced of Jerry’s insanity based on their series of interactions. But no matter—she agrees to take his case and he promptly falls for her.

Meanwhile, a second spy ring headed by a wealthy industrialist (Torin Thatcher) discovers the transport of the plans. Each of the two competing spy groups gets half of the missing plans, but of course that’s not enough for the whole story. Jerry’s hotel room becomes ground zero for a series of stabbings, which of course Jerry is eventually framed for through circumstantial evidence (like holding the knife and having bodies in the room). Naturally this leads to a chase and eventually an untangling of the whole plot and the aforementioned happy ending.

The biggest issue with Knock on Wood is that it’s the sort of comedy that vastly overplays its hand at all times. There’s not a moment of subtlety here to be found and a number of the gags go on too long. At one point, on the run from the police, Jerry is forced to pretend to be a car salesman and is forced to demonstrate a car loaded with gadgets. Of course, this all goes wrong and all of the gadgets turn on and off repeatedly for what feels like a couple of minutes.

It’s hard not to enjoy it, though. Despite our being told that the secret stolen plans hold the fate of the world in them, there’s not really a lot of danger going on here. It’s all in good fun, and it is a great deal of fun in many places. Sure, it has some gags that simply don’t work as well as they should and too many things happen too many times for them to sustain the funny, but that’s to be expected from the era of the film.

Almost in spite of itself, Knock on Wood has some well-written moments, like Jerry actually using his ventriloquism to get him out of a difficult situation at one point. When it happens, it’s been such a long time since we’ve seen him perform his act that we’ve almost forgotten what it is that he does on stage.

In truth, though, Knock on Wood is little more than a goof. It’s fluff and it’s not really trying to be anything more than that. In that respect, it’s not only a respectable film, it’s lack of any real ambition beyond being entertaining is both understandable and completely forgivable. This is a difficult film to dislike because it so earnestly wants to entertain its audience.

This isn’t a film I’d specifically seek out to watch again, but I’d be lying if I said I didn’t have fun while it was playing.

Why to watch Knock on Wood: It’s harmless fun.
Why not to watch: If you don’t buy the style of humor, there’s nothing here for you.