Picks from Chip: Much Ado About Nothing

Film: Much Ado About Nothing
Format: Streaming video from NetFlix on rockin’ flatscreen.

This is the second in a series of twelve films suggested by Chip Lary at Tips from Chip. 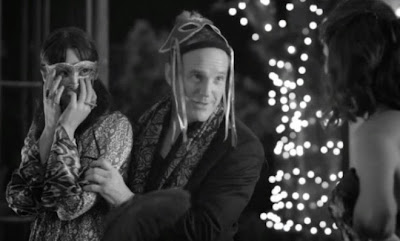 I’m guessing it’s fun to be Joss Whedon. Sure, the Avengers stuff is all fun and everything, but there’s a certain freedom he appears to have in choosing some projects. Much Ado About Nothing, a modernized version of Shakespeare’s play in all but language, appears to have been made with a bunch of alums from other Whedon projects. “Hey, gang! Let’s do Shakespeare!” As fitting Whedon’s sensibilities, this is one of Billy the Shake’s comedies. That does make me want to see him tackle something like MacBeth, though.

I should probably mention that modern retellings of Shakespeare don’t always work for me. Kept in the classic style, I buy the language. Keep the language the same but modernize everything else, and there’s a part of my brain that objects. I’d be lying if I said that didn’t happen here, at least for the first chunk of the film. I had trouble accepting a modern setting with the style of speech. Eventually it worked for me, though, but it was a struggle for me for the first 20 minutes.

Much Ado About Nothing is a comedy, which means in the world of Shakespeare that it’s also a romance and we’re going to end with everyone we want to get married getting married and any bad guys captured and being held for trial. That’s the whole point of a Shakespearean comedy. The good guys get happily married no matter how much they protest against it and the villains end up paying for their misdeeds. We know that going in, so it’s really all about the getting there that makes the trip worth it.

Here’s the quick set up. Don Pedro (Reed Diamond) is returning to…wherever (it’s Messina in the play) from battle. Here he is greeted by Leonato (Clark Gregg), ruler of…wherever. Actually, that’s never really made totally clear. Based on the suits and guns, it kind of feels like these guys are a crime family, not city rulers. Anyway, one of Don Pedro’s companions, Claudio (Fran Kranz) is immediately smitten by Leonato’s daughter Hero (Jillian Morgese). This comes as great sport to another of Pedro’s men, Benedick (Alexis Denisof), who has sworn off marriage.

Part of Benedick’s dislike of women comes from his constant battles with Beatrice (Amy Acker), Leonato’s niece. The two are constantly insulting each other to the point where it’s easy to assume there’s actually a level of attraction there. With a little difficulty, Hero and Claudio end up engaged, and the group decides it’s only right and fitting that Benedick and Beatrice become a couple as well, and they conspire to make it happen.

Ah, but the monkey in the wrench is Don John (Sean Maher), bastard brother of Don Pedro. Don John is a classic Shakespearean villain. He does bad things to people not for personal gain but because he likes doing bad things to people. He wants to kill everyone’s buzz and conspires with his people (Spencer Treat Clark and Riki Lindhome) to make Claudio believe that Hero is giving it up to another man, a ploy which both Claudio and Don Pedro fall for. And now that Beatrice and Benedick have become an item, Beatrice demands that Benedick kill Claudio to avenge her cousin’s besmirched honor.

Again, we know it’s all going to come out right in the end. Somehow, some way, Claudio and Hero will end up together and so will Beatrice and Benedick. Don John will be captured and eventually punished, but this is a comedy and we’re not going to see that happen. Because this is a comedy, much of the plot against Claudio and Hero will be unraveled by the purely comic characters of the security team (the city watch in the play) led by Dogberry (Nathan Fillion), the slow-witted constable.

My biggest issues here came at the start. It took me a few minutes to attune myself to hearing 16th century language coming out of the mouths of people holding guns and wearing modern suits. Once I adjusted to it, though, I was able to buy into the production and I enjoyed it quite a bit. Whedon manages to modernize a great deal of the story, adding in nice pieces of humor and, more or less, creating something like a modern sensibility. There’s humor here from how particular scenes are shot that isn’t necessarily in the original production or script, and that works really well. For instance, when Hero and Ursula (Emma Bates) conspire to make Beatrice believe that Benedick loves her, Beatrice takes a beating from falls, bumps, and household objects trying to overhear the conversation. It’s fun stuff.

I also like the decision to film in black and white. This would have worked well in color, too, but I always appreciate a lustrous black-and-white film when it’s done well, and this is.

Why to watch Much Ado About Nothing: A fun version of a fun comedy.
Why not to watch: If you aren’t attuned to Shakespearean language, you might have trouble following parts of it.

Posted by SJHoneywell at 1:32 PM

Email ThisBlogThis!Share to TwitterShare to FacebookShare to Pinterest
Labels: comedy, Joss Whedon, Much Ado About Nothing, Picks from Chip, romance