Well, Australia Was Populated by Criminals... 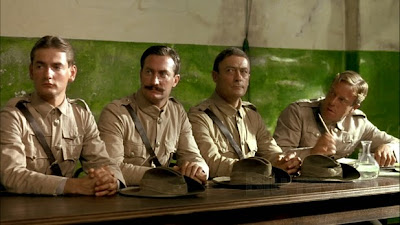 There’s something about a courtroom that screams drama. That’s natural, of course—in a good trial, someone’s life is on the line. That’s even more the case when it’s a court-martial and the death penalty is on the table. With Breaker Morant, we get all of that, along with one of the great performances in the career of Edward Woodward. As a bonus, we get a history lesson, since this film takes place during the Boer War, which isn’t one that gets a lot of play, at least in American classes on history.

The plot is straightforward enough. Three officers from the Australian Bushveldt Carbineers are court-martialed for the alleged murder of a Boer POW, a massacre of six additional prisoners, and finally the murder of a German missionary. The three lieutenants, Harry “Breaker” Morant (Edward Woodward), Peter Handcock (Bryan Brown), and George Witton (Lewis Fitz-Gerald) are placed on trial. They are assigned Major J.F. Thomas (Jack Thompson) as counsel. Thomas is a lawyer, specialized more in wills and probate and has no trial experience. He’s also given only a single day to prepare his defense while the prosecution has had six weeks.

As befits a courtroom drama, the film is told in a combination of court scenes and flashbacks to what actually happened. A running theme through the film is the idea that the British Empire wants the war with the Dutch settlers in South Africa to come to an end. There is a need, or at least the perception of a need for something that will make the Empire look like it is ready to negotiate a peace settlement. The court-martial is exactly that. If the men can be convicted of assassinating Boers, it can be seen as a step toward wanting an end to the hostilities.

A second running theme through the film is that Morant, Handcock, and Witton were acting under orders. They had been told a number of times that no prisoners were to be taken. In fact, since the enemy in the part of the Transvaal they were fighting in contained few regular soldiers and consisted mainly of guerrillas, a “shoot on sight” order was more or less standing. There were no facilities for prisoners nor was there a way to even feed them. Essentially, while never made official, the order of business was to kill any enemy combatants regardless of their surrender, condition, or status as civilians.

This is exacerbated by the death of Captain Hunt, Morant’s commander. Before the death of Hunt, Morant is demonstrated in the film as being unwilling to kill prisoners. With Hunt’s death and apparent mutilation, Morant’s position on the prisoners changes to something much more severe. There’s a sense of retaliation in everything Morant does and commands of the men and other officers.

The central question of Breaker Morant is the complexities of this reality. Did the men follow orders? Should they have followed those orders? Was the trial used as a showpiece to help end the war? The general reaction has been that Morant, Handcock, and Witton were little more than handy scapegoats for the British Empire to use as a way to demonstrate their own seriousness at following the rules of war. There is a sense of that in the film, despite director Bruce Bereseford’s complaint that this was not what he intended.

In truth, the actual Lieutenant Morant admitted to the crimes that he was accused of. The larger question here, and the one really worth investigating, is what led these men to commit acts that, in any other context, they would never have considered. What is it about war that leads specifically to this sort of atrocity, and what is it in people that makes them capable of performing such ugly and brutal acts of violence?

The closest we get to an answer is the closing speech of J.F. Thomas in the trial. There are no real answers here, though, and the result of the trial lends a great deal of credence to the scapegoat theory of why the men were court-martialed in the first place. Beresford can complain all he wants that this wasn’t the point of the film, but it’s not a difficult conclusion to reach from the history itself.

Edward Woodward gives the start performance here, and it’s the sort of performance that makes careers. The same could be said of Jack Thompson, who is great in the role of defense attorney. Both of these men make the film. They are immediately likeable and worth rooting for. This is less true of Bryan Brown’s Handcock. For what it’s worth, though, this is more the fault of Handcock’s personality and not Brown’s performance.

Breaker Morant is a film that should be better known. It may lack the outright thrill of the average war movie, but it is thoughtful, smart, and asks far more questions than it answers. Films that deal with sticky issues like this should do exactly that, and when you tack on some magnificent performances to seal the deal, you have a film that more people should know.

Why to watch Breaker Morant: Courtroom dramas don’t get much better.
Why not to watch: It’s infuriating.