Off Script: The Beyond 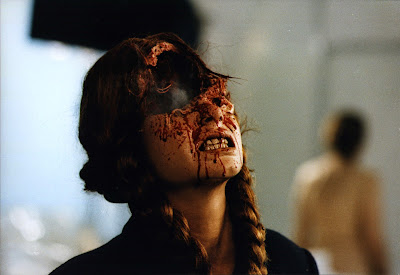 Eventually, my wife will cancel our Hulu subscription, something I’ve asked her to do for the past month. Until such time as that happens, though, I’m going to continue to watch movies on it. I was in the mood for something scary today, or at least weird and disturbing. The Beyond seemed like a good choice. This is one of the classic Italian horror films by Lucio Fulci. I know more about Fulci’s work than I’ve seen and I know that 1980s Italian horror tends to be pretty gruesome, so I sat down expecting an entertaining ride, which is what I got, at least in part.

In reality, The Beyond doesn’t make a great deal of sense, but it kind of isn’t supposed to. It’s really just an excuse for a number of really nasty splatter scenes, most of which involve eyes popping out of people’s heads. There is something like a plot here, but it genuinely doesn’t make sense through most of the film. Things happen without much cause and the vast majority of the cast is made up of really dumb people. Again, that’s not a terrible criticism of this film because it’s not a film that anyone watches for the scintillating plot.

We start in the 1920s in a hotel in New Orleans where an artist named Schweick is literally crucified by an angry mob that thinks he is a warlock. This death opens one of the seven doors to Hell, allowing the dead to cross over. However, they don’t and we instead jump forward about 60 years. The hotel in question, known as the Seven Doors Hotel, has been inherited by a woman named Liza Merrill (Catriona MacColl), who has plans on renovating the old place and reopening the hotel, which reactivates the portal.

Accidents start happening at the hotel. A painter falls off his scaffold and starts raving about the eyes of something he saw inside the hotel. A plumber comes to fix a leak in the basement and is killed. We see what happens—basically his face gets ripped off and his eyes popped out of their sockets by a demonic hand. His body is eventually discovered by one of Liza’s employees, Martha (Veronica Lazar).

Meanwhile, Liza encounters a blind woman named Emily (Cinzia Monreale), who apparently doesn’t actually exist since no one else knows of her existence. Emily wants Liza to give up the hotel, but Liza refuses. This is one of first times that we get first-hand experience of the abject stupidity of the characters. The plumber is horribly killed in the basement, and within a day or two, Liza’s friend Martin (Michele Mirabella) is suggesting new ways to expand the hotel into the basement, something that Liza doesn’t try to stop.

Anyway, there are plenty of other deaths. The plumber’s wife gets killed while dressing him for his funeral and somehow ends up lying on the floor of the morgue while a bottle of acid is tipped over onto her face. The daughter of this couple, Jill (Maria Pia Marsala) survives this, but ends up with the same blind cataracts as Emily, who doesn’t actually exist. Hotel worker Arthur (Gianpaolo Saccarola) gets killed in the basement at the same place the plumber did, because evidently he was amazingly stupid. Eventually Martha gets killed (and an eye popped out) by the reanimated plumber. Oh, and Martin, who wants to revitalized the basement that is actually a portal to hell gets struck by lightning and then has his face ripped off by a bunch of tarantulas. Go figure on that.

Eventually, Emily gets killed and the dead suddenly come back to life because the portal of Hell is fully opened. It all concludes when Liza and a doctor named John McCabe (David Warbeck) are trapped in the hospital surrounded by reanimated corpses. Even young Jill gets her head literally blown off (see the picture above) because she somehow became infected or possessed or something. And then it ends.

So it doesn’t make a great deal of sense, but it’s bloody and gory as all hell. There are multiple popped out eyeballs. There’s a spider attack as well, and this is purely there for the gore. It goes on far too long. There are literal fountains of blood throughout and a couple of really good jump scares. But it is incomprehensible pretty much from stem to stern and the ending is totally incoherent.

I don’t really care, though, because The Beyond is perfectly nasty. The money shot is literally that—Jill’s execution by Dr. McCabe comes with her brain literally falling out of the back of her skull. It’s inexplicable, of course. McCabe shoots a number of zombies before this happen and none of their heads explode. But again, I don’t really care, because for anyone who enjoys gory moments, it’s on a par with the guy’s head exploding in Scanners.

The biggest issue is that the characters really are stupid. I’ll toss this up as the most revealing moment of their idiocy. In the hospital when the bodies start rising, McCabe pulls out a pistol and starts shooting. His first couple of shots hit the body of his target and, zombies being zombies, nothing happens. He then goes for a headshot and down goes the ghoul. Naturally, he starts aiming for the head. However, each time he finds himself in a new place, he goes back to shooting at the body, wasting ammunition, until he remembers to go for head shots. Throughout this sequence, every headshot results in a downed zombie. No body shots do. So why is he aiming at their bodies?

Don’t watch The Beyond because it makes sense. Watch it because you could fill up an Olympic swimming pool with the blood, brains, and random spatter. For that and that alone, the damn thing is genius.

Why to watch The Beyond: A gore-fest like only 1980s Italian horror can be.
Why not to watch: The characters are really, really stupid.

Email ThisBlogThis!Share to TwitterShare to FacebookShare to Pinterest
Labels: horror, L’aldila, Lucio Fulci, Seven Doors of Death, The Beyond