Picks from Chip: Once Were Warriors

Film: Once Were Warriors
Format: DVD from NetFlix on laptop.

This is the first in a series of twelve films suggested by Chip Lary at Tips from Chip. 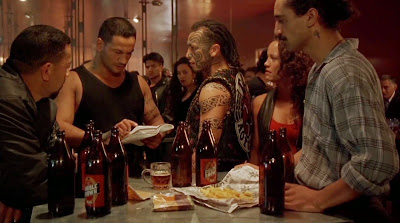 A film like Once Were Warriors is not the sort of thing that gets summed up in a single sentence or even a single paragraph. Earlier this month I reviewed Father Goose and suggested that it was a film with multiple personality disorder because it encompassed multiple genres. Once Were Warriors doesn’t encompass multiple genres, but it does address any number of problems and social issues. Is it about poverty? The treatment of indigenous cultures? Spousal abuse? Yes to all of these, but it’s really about masculinity and a sort of male impotence in the modern world.

What happens when a warrior culture can no longer be a warrior culture? More than anything, that’s what Once Were Warriors asks, and it gives a series of different answers. For the five characters with whom we mainly are concerned, the answers are all different, and the answers offered to us at the end as the right ones are probably the ones we though we right going in.

Once Were Warriors is the story of Jake “The Muss” Heke (Temuera Morrison), his wife Beth (Rena Owen), and their five children. Really, though, the story is only about the parents and the three oldest children. The two young ones (Rachael Morris and Joseph Kairau) are so non-existent in the film that the NetFlix write up suggests that the Hekes have only three kids. As the film starts, Jake has been laid off and has signed up for welfare. He’s not worried about this, though, because the welfare money is only a few dollars less per month than he was getting on the job, and so he’ll still have enough to drink with.

Beth, who is the main focus, wants more than a life on the dole in a rented house, but generally finds it easier to enable Jake than to make any changes. This is also because any attempt to change much of anything or to stand against Jake in any way comes with the price of a terrible beating. We’re “treated” to one of these early in the film, and it is a scene of pure brutality, and naturally followed by an implied spousal rape. Her frustrations with Jake fade away the minute he comes back from the bar with his friends, and she joins in the drinking with everyone else.

The oldest child is Nig (Julian Arahanga), who reacts to his family situation and his father’s indolence and violence by joining a gang. The initiation of the gang is to take a vicious beating at their hands, which is followed by traditional Maori facial tattoos. Nig gets the tattoos only on one side of his face, indicating an acceptance of his mother but not his father. It’s no mistake that Nig’s complete rejection of his father causes him to accept life in a gang that strongly resembles the life he had at home.

Second son Mark (Taungaroa Emile), who goes by Boogie, reacts by engaging in a life of crime. He’s picked up by the police and while he was a bystander in the crime in question, he’s got a list of other offenses. The beating taken by Beth at the hands of Jake prevents her from being at Boogie’s court appearance, and the boy is remanded to a state home. This crushes Beth but doesn’t seem to affect Jake in the least.

It is second child and older daughter Grace (Mamaengaroa Kerr-Bell) who is the secondary focus of the film. Her escape from the life she sees is to write stories in a notebook, which she reads to the two youngest children and to her friend Toot (Shannon Williams), a homeless boy who lives in a car under a bridge. As the film goes on, Grace becomes a more central character as she is the one member of the family who seems to have any sense of responsibility for herself or for anyone else. Grace’s fear, something we intuit rather than have explained to us overtly, is that the life she sees of her mother is the life that she will be destined to have herself.

Naturally, this is going to culminate in Grace being raped, and she is at one of the drunken parties in the family home. Her rapist is Bully (Cliff Curtis), one of her father’s best friends. This conclusion of the second act is what spurs the last half hour of the film and something like a resolution for most of the family.

What we’re eventually offered here as an answer is, as I said at the top, something akin to what we likely thought going in. There is a certain power in tradition and in not reclaiming the past, but in giving it a sense of honor. Soon after Boogie’s arrival in the state home, he begins to be taught some of his cultural past from Bennett (George Henare), the man who runs the school. By embracing his past, learning how to perform a haka and learning the traditional Maori singing, Boogie starts to embrace who he is. He’s much the same kid at the end of the film, but there’s a sense that a change is underway with him. The same is true of Beth, who we learn was raised in a Maori village. By embracing and accepting the past, they move forward, something physically represented in the tattoos on Nig’s face.

I have a couple of issues. The first is that Grace is supposed to be 13, and she doesn’t pass for 13 for a second. I was surprised at that piece of information, which comes near the end. It’s not that she acts older than 13, it’s that she is older than 13. I’d have bought 15 and guessed 17. This is a quibble, though. What happens to Grace isn’t mollified in any way regardless of her age. But compare her with Paikea from Whale Rider who was actually 12 or 13, and the differences are obvious.

The bigger issue is that there are too many stories going on here. Nig, once he gets the tattoos, becomes almost a non-character until the end of the film. Boogie, except for a scene or two in the middle as he learns the haka, also fades from the film until the end. Both of these stories seem important to me, as they are variations on dealing with being marginalized by their culture and their country. We needed more of them here, and the film could have stood another five minutes each on their stories, and the film is short enough that an extra 10 minutes spent this way would be 10 minutes well spent.

But it’s still worth seeing. I’m glad I got the chance to watch it. I think I like it less than Chip does, but it’s still a film that I think is worth your time. You’re 1 for 1, Chip.

Why to watch Once Were Warriors: Because the question it ultimately asks is one that needs an answer.
Why not to watch: Too much story for the film.

Posted by SJHoneywell at 1:13 PM

Email ThisBlogThis!Share to TwitterShare to FacebookShare to Pinterest
Labels: drama, Lee Tamahori, Once Were Warriors, Picks from Chip