Usually, the Wealthy are Called "Eccentric"

Film: The Madness of King George
Format: Streaming video from Hoopla Digital on The Nook. 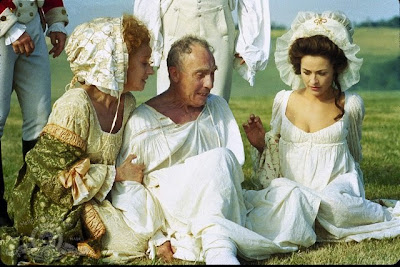 The title of this one really says it all. The film takes place in England just after the American Revolution. King George III (Nigel Hawthorne) is dealing with his government, specifically with his Prime Minister William Pitt the Younger (Julian Wadham) and Pitt’s opposition in Parliament, Charles James Fox (Jim Carter). He also has to worry about George, the Prince of Wales (Rupert Everett), who desperately wants to be the king.

And then the madness sets in. King George starts having hallucinations and evidence of delusions and schizophrenia. Later medical research has determined that George more than likely was afflicted by porphyria which causes these symptoms, is hereditary, and also has the odd symptom of turning the victim’s urine unusual colors. Much is made in the film of King George’s urine turning blue.

What follows, more or less, are three individual but related stories. One of these, and in many ways the main story, is the king’s madness. Doctors are brought in to determine not only what is wrong with the king but also to discover the best way to cure him or at least reduce his symptoms. The Prince of Wales’s personal physician Dr. Warren (Geoffrey Palmer) is brought in, but is specifically under instructions from the Prince. Dr. Pepys (Cyril Shaps) is also consulted, and it turns out that he has a particular focus on where to look for clues to the king’s malady. The third doctor is Dr. Willis (Ian Holm), brought in at the request of the queen’s attendant Lady Pembroke (Amanda Donohoe). Willis deals with the insane and while he has some unusual techniques, he also has a good track record.

A second and much smaller theme of the film is the medical experimentation and ideas themselves. Dr. Warren believes in blistering, which is about as horrifying as it sounds. The idea was to heat glass bottles and press them on the skin in an effort to change the flow of the bodily humours in a more productive way. Seeing that the bodily humours don’t really exist, this treatment more or less does nothing but cause pain. Dr. Pepys is much more interested in the king’s various excreta, and waxes philosophic over the king’s leavings at a regular basis. Dr. Willis demands that the king control his impulses, and has him strapped to a chair or kept in a straitjacket when he talks incoherently, swears, or acts in an inappropriate fashion.

While Willis appears to be the most successful in his treatments, it’s worth noting that the type of porphyria King George III had goes through periods of remission. It’s likely that Willis’s treatments did little but torture the poor man who was suffering from something beyond the knowledge and control of his doctors.

The third story concerns the power play. With the king incapacitated, the Prince of Wales sees this as an opportunity to take the throne for himself. If named as regent, he would be king in all but name and would be able to spirit George III off to an asylum and never relinquish that power. He goes about this as boldly as he can, feeding information from Dr. Warren to his political allies in Parliament about the king’s regular outbursts and blasphemies. His plan is to be named regent and then install Fox as his prime minister. The Prince’s connivings so far as to exclude Queen Charlotte (Helen Mirren) from his treatment, which is both terribly hard on her and makes the king’s treatment that much more difficult.

Nigel Hawthorne was nominated for this film, and it would be difficult to suggest that he didn’t earn that nomination. He is completely at home in this role, and sells the madness completely. It’s worth noting as well that if you’ve ever seen Chicken Run, rest assured that the character of Fowler is absolutely based on Nigel Hawthorne in this film down to the constant “What what!?” remarks..

Helen Mirren also received a nomination for this film, and I’m not entirely sure why. I like Helen Mirren, but she’s not in this nearly enough to justify her nomination. My guess is that she was nominated specifically for the scene where she confronts the Prince of Wales about the treatment of her husband.

The Madness of King George is a fine film, but I’m not sure I’m ready to call it a great one. Like the king, it’s a bit off in a real sense. There are moments in the film of real comedy, but they are constantly tinged with tragedy. There’s a great deal of tragedy here, but most of it has comedic elements. So which is this film? It’s kind of both, and because of it, it’s kind of neither.