The Sheik of Araby 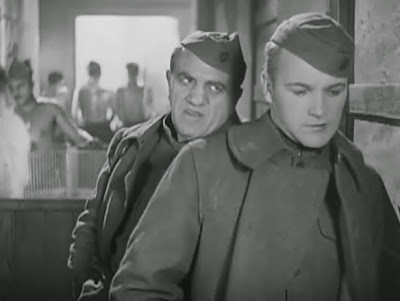 Turner Classic Movies is gearing up for their 31 Days of Oscar, which means I need to burn through as much as I’ve got saved as I can to make room for those rarities to come. Two Arabian Knights is one I’ve had sitting there for quite some time. No time like the present, right? Silent films pose their own particular problem in viewing. The conventions are so different from modern films, that it takes some doing to get through without too much frustration.

Two Arabian Knights is both a World War I film and a comedy, a combination of genres that can work if done well. Actually, as I think about it, I tend to like war comedies in general, so it has that going for it. We start with a pair of American soldiers in a trench with the German troops about ready to overrun their position. Knowing their about to die, Private W. Daingerfield Phelps III (William Boyd) decides that this is as good a time as any to finally have it out with his hated sergeant, Peter O’Gaffney (smash-faced Louis Wolheim). The two duke it out, not noticing that by the time they are done, they are surrounded by German troops and taken prisoner.

Once in prison, the two quickly make friends with each other, mainly because Phelps draws a caricature of one of the guards and when O’Gaffney is blamed for it, takes the rap. Now budies, they put all of their efforts toward escaping. They do, in part by mauling a couple of fellow prisoners for their white cloaks, allowing them to blend in with the snow. Once out, they are almost immediately recaptured by Germans escorting a group of Arabian prisoners. Since they’re wearing something that looks like robes, they are put in with the group, which is being sent to Turkey.

Again, they escape and board a tramp steamer headed for Arabia. About to be pitched off as stowaways, Phelps comes up with money hidden in his shoe to pay for passage for the both of them. On the trip, they see a sinking boat and Phelps jumps in to save a drowning woman, then O’Gaffney jumps in to save them both. The woman turns out to be Mirza (Mary Astor), the daughter of a powerful emir. But, since the two are Americans and thus infidels, Mirza’s handlers take exception to their interest in her.

Both men are interested in Mirza, and both attempt to get a peek under her veil. Only Phelps does, though, which has serious ramifications. Eventually, Mirza is taken off the boat by Shevket ben Ali (Ian Keith), the man she has been promised to. Shevket learns of Mirza’s improper behavior on the ship and promises to kill the two Americans, who are unaware that their lives are again in danger. This becomes relevant when the pair show up at the emir’s palace for a reward for saving Mirza (and with the hopes to see Mirza again).

But does it work? Parts of it do. There are some really good jokes as the two protagonists attempt to outwit each other. O’Gaffney soaks Phelps’s uniform in water to prevent him wearing it; Phelps retaliates by pushing O’Gaffney into the tub. Later, Phelps steals O’Gaffney’s pants and hides them by wearing them over his own pants. There are several moments where the two pantomime their actions to someone only to discover that the person in question is fluent in English. These are cute moments, and they generally work pretty well.

But that’s really pretty much it. Two Arabian Knights forgets that it’s a war film the minute our two heroes board the ship. Once that happens, any thoughts of the war are completely gone. The ending is surprisingly clever, but it also suffers from the sort of “white makes right” belief that films of the time often had. Situations that would normally entail certain death are handled remarkably well by our heroes, often simply based on the fact that they are American servicemen. A horde of Arabian killers armed to the teeth? Oh, they’ll get out of that with their manly fists, of course.

I can very much see this being a popular film for its time. There’s a lot here that an audience in 1927 would enjoy, the sense of adventure and a chance to see an exotic location (even if it really was just a back lot) being among them. Not much carries over to the modern era, though. I’m happy to have had a chance to see this, even the parts that are in desperate need of a restoration. This was a lost film until a copy was found in the vault of Howard Hughes. I’m pleased that it was preserved, but I’m also pretty confident that now that I’ve seen it, I won’t find the desire to see it again.

Why to watch Two Arabian Knights: Silent comedy works better than silent drama.
Why not to watch: This one needs more to work really well.