Film: The Miracle of Morgan’s Creek
Format: Streaming video from Hoopla Digital on The Nook. 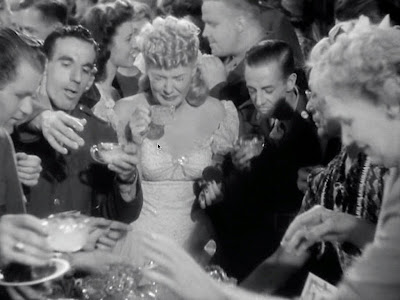 You’ve got to hand it to Preston Sturges. Once you realize exactly what the plot of The Miracle of Morgan’s Creek is and exactly when this film was made, it’s staggering that it made it past the Hays Code at all. Seriously, it would be mildly shocking today, but in 1944, it was positively scandalous.

First, it’s immediately evident that this is not going to be merely a comedy but a screwball comedy when we learn the names of our principle characters. Marx Brothers movies and plenty of screwball comedies give us character names that are far beyond the pale. Look at a film like Ball of Fire, with Professor Bertram Potts and Sugarpuss O’Shea. Well, The Miracle of Morgan’s Creek gives those names a run for their money. Trudy Kockenlocker (Betty Hutton) is a patriotic young woman who wants nothing more than to see the troops off to Europe. This is strongly protested by her father, local policeman Edmund Kockenlocker (William Demarest) and her wannabe boyfriend Norval Jones (Eddie Bracken). Norval has been classified as 4-F because of his nerves and his high blood pressure, both of which are caused by his fear of being classified as 4-F.

Anyway, on the night of a farewell dance, Trudy is barred from going. On a pretense, she calls Norval to take her to the movies. In modern terms, Norval is what some would call deep in the “friend zone.” How so? Because Trudy doesn’t want to go to the movies. She wants Norval to go to the movies without her, and lend her his car so she can go dancing with the troops. And like a sap, that’s exactly what he does.

Trudy turns up the next day drunk, with the car damaged, and (horrors!) married. Things quickly get worse. It turns out that when she got married to one of the departing soldiers, she gave a false name. She also can’t remember the soldier’s name or even what he looks like. And worst of all, she discovers soon after that she is pregnant. Like I said at the top, knowing that this came out in 1944, it’s incredible how it made it past the censors. We’ve got essentially an unwed mother in that our heroine is knocked up on her wedding night by a man she can’t remember. And the perpetrator of this crime is an American soldier going off to fight in a war. I’m actually a little surprised a few of the censors didn’t flat out die.

What follows is pretty much what you’d expect from what we already have. Norval, who has always been desperately in love with Trudy, steps up to take the place of the missing husband. This does not set well with the overprotective (and evidently for a good reason) father, who starts coming up with crimes with which to charge poor Norval, who soon finds himself a fugitive from justice. But this is a screwball comedy, and of course everything will work out in the end and both Norval and Trudy will end up happy and with their reputations intact. Kinda.

The Miracle of Morgan’s Creek suffers from what Roger Ebert called an “idiot plot,” meaning that everything in the film would work out in a couple of minutes if everyone in the film weren’t an idiot. Everything in the story would correct itself half an hour in if Trudy would admit to her father that she’d gotten married and pregnant on the night she was out, but that would pretty much invalidate the last hour of the film.

This movie is buoyed greatly not by Betty Hutton or Eddie Bracken or even William Demarest. No, the prize of The Miracle of Morgan’s Creek is Diana Lynn as Emmy Kockenlocker, Trudy’s 14-year-old sister who is wiser in the ways of the world than pretty much the rest of the characters put together.

The Miracle of Morgan’s Creek is pretty much harmless entertainment. It’s silly and extreme, and I got very tired of Betty Hutton crying and both Betty Hutton and Eddie Bracken stuttering to demonstrate their nervousness. There’s plenty of physical comedy, much from William Demarest pratfalling. But it’s fun and easy to like. Yes, it’s a silly movie and yes, it’s risqué for its time. And so what? There are some solid laughs in it.

Still, when you consider the Hays Code, the real miracle of Morgan’s Creek is that this made it into theaters at all.

Why to watch The Miracle of Morgan’s Creek: It’s surprisingly still funny.
Why not to watch: The stuttering gets old.