His Cross to Bear

Film: The Last Temptation of Christ
Format: Streaming video from Hoopla Digital on The Nook. 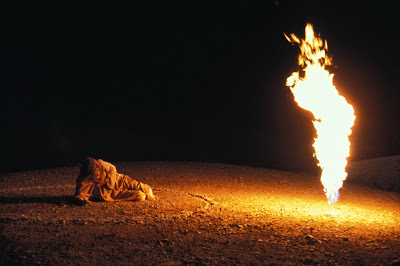 I’d never seen The Last Temptation of Christ until now, but I certainly remember when it was released because of the controversy surrounding it. Had I been in my more religious phase when the film came out, I may well have been offended by it, too. As it happens, the film came out in 1988 when I was still a believer but had lost interest with religion as organized practice. The controversy surrounding this film was substantial, and now that I’ve seen it, I understand why. I think it’s silly that it was controversial, but I get why it bent a lot of people out of shape.

There’s no good way to really explain The Last Temptation of Christ. It follows the basic Christ story but it gets there by some very strange routes. For the true believer, even the opening of the film, which features Jesus (Willem Dafoe) building crosses for the Romans to crucify Jews, doesn’t just border on blasphemous, it crosses the line completely. Even more, it features a Judas (Harvey Keitel) as a man dedicated to fighting the Romans and who wants Jesus to help him overthrown the foreign yoke.

But Jesus is conflicted. He hears the voice of God but doesn’t want to. He wants to be left alone to live his own life, and in fact helps the Romans to crucify the Jews because he wants God to leave him alone. But, of course, we’re eventually going to get to a more traditional Christ story. He goes off into the wilderness, gets tempted by Satan, gets baptized by John the Baptist (Andre Gregory), and begins preaching.

Christ’s teachings are one of the many places the film can be called “non-canonical” to put it mildly. He meanders through something akin to the Sermon on the Mount, but it’s far more flower child and rambling than what’s presented in the presumed text. He also performs a couple of miracles and encounters Saul (Harry Dean Stanton, which is mildly inspired casting), who tracks down the raised Lazarus and kills him. Eventually, we have something like a last supper, and Jesus begs Judas to betray him so that he can be crucified to fulfill his destiny and become a new covenant.

And here’s where things get really strange. The crucifixion comes with a good deal of running time left in the film. Of all the places that would anger the faithful—Judas coming off as a hero, Christ having sexual feelings toward Mary Magdalene (Barbara Hershey), even Christ claiming that he had a sinful nature and his desire to avoid the will of God—it is what happens during and after the crucifixion that makes people’s heads explode. I need to go into it to discuss the film, but to do so, the film needs to be spoiled.

After being hung on the cross, Jesus is visited by his guardian angel (Juliette Caton), who tells him that he is not the Messiah and that God does not want him to suffer. She takes him down from the cross, presumably putting up something like an apparition, since the crowd still is gathered and no one stops her from removing him. He goes to Mary Magdalene and marries her, but she dies while pregnant. From there, he goes to the house of Lazarus’s sisters, Mary (Randy Danson) and Martha (Peggy Gormley) and marries them both, fathering a number of children. He encounters Saul again, this time as Paul, who has converted, and who tells Jesus that the reality of his escape from the cross doesn’t matter—the world needs the resurrected Jesus more than it needs him.

And then, on his death bed, Jesus is revisited by a few of his old disciples, including Judas. Judas tells him that his guardian angel was actually Satan himself sent to trick him into not becoming the sacrifice he needed to be. His eyes now fully open, Jesus begs God to put him back on the cross and we flashback to the crucifixion, with Jesus staying put this time, almost as if he were nailed there.

So there’s blasphemy aplenty here, which makes it no surprise that this may be my new favorite Jesus-preachin’ film. This is a Christ that I can relate to. The real blasphemy here is that The Last Temptation of Christ turns Jesus into a man instead of leaving him a god. It humanizes him and makes him more understandable. The people who protested this film, many of whom never bothered to watch it in the first place, never got to understand the actual power of the idea contained here. True believers frequently say that the power of Christ is that he was god, but that he was also a man and thus suffered our pains and our anguish. So why should it be so controversial when a film shows this same idea?

I don’t know. This isn’t a perfect film, but it’s inspired in places. Casting David Bowie as Pilate is genius, for instance. Oddly, the non-canonical aspects of Christ’s preaching is what bothered me the most. But humanizing a character whose main selling point is that he was human seems an odd thing to get upset about.

Why to watch The Last Temptation of Christ: Scorsese does religion.
Why not to watch: “Non-canonical” doesn’t do it justice by a half.