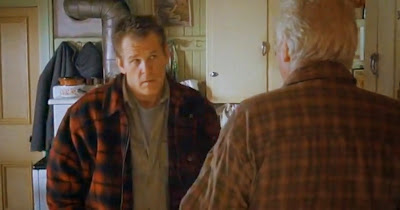 I watched Affliction when it became evident that a good proportion of the films on my streaming queue were about to vanish. I’m not sure why I picked this one over all of the others that were about to leave streaming. One seemed as good as another, basically. I went into this cold, knowing only that Nick Nolte appeared on the cover art, and thus assuming that he would be the focus of the movie. What I found was a film with a deep vein of darkness. I used to watch the television show Hoarders. In one episode, the head of the clean-up crew, in reference to a homeless man living on the property of a hoarder, said something to the effect that we’re all five bad decisions away from shitting in a bucket. Affliction is the cinematic version of this, a life that starts on the edge and spirals into the abyss inside of two hours.

Wade Whitehouse (Nick Nolte) is the policeman in a small New Hampshire town. We learn that he is divorced and that his time with his daughter Jill (Brigid Tierney) is uncomfortable. Wade wants to sue for full custody, a move that virtually no one but he supports. Wade’s unpleasant relationship with his daughter and his custody battle is something that pops up from time to time in the film, and is something that perhaps serves as the catalyst to Wade’s downward spiral. Soon after this, a hunting accident occurs. Hunting guide Jack (Jim True-Frost) reports that his customer Evan Twombley (Sean McCann) tripped and shot himself with his rifle.

It’s a plausible enough story, but other facts slowly come to light. As it happens, Twombley was set to testify in a lawsuit. His son-in-law (Steve Adams) stands to inherit a great deal of power. At the same time, this son-in-law has been buying up property around the town with Gordon LaRiviere (Holmes Osborne), who happens to be Wade’s boss, and the boss of Jack the hunting guide. Slowly, incrementally, it dawns on Wade that it might all be a conspiracy to buy up the land around the town illegally. Breaking this and bringing it all to light becomes Wade’s obsession.

The third factor in this is Wade’s relationship with his father (James Coburn), a bitter, alcoholic and violent man who terrorized Wade and his siblings. This relationship colors every aspect of Wade’s life, his own propensity for violence and loss of control, his drinking, and his abusive relationship with Margie Fogg (Sissy Spacek), who he hopes to marry to provide a more normal home life for daughter Jill when he gains full custody, a battle he is destined to lose (although we never get there in the film).

Much of this is narrated to us by Rolfe Whitehouse (Willem Dafoe), Wade’s younger brother. Rolfe has managed to get out of the small town and maintain some level of distance from his dysfunctional family, which makes him an interesting, almost detached narrator. His voice appears irregularly over the film, hinting at what is to come.

I was surprised at how quickly everything in this film spun out of control, darkness piling on top of darkness. Once we get past a certain point, there is no going back, and before too long, there is no place for us to go but to continue to slide downward, inexorably pulled into the darkness of Wade Whitehouse’s life and collapse.

While it was James Coburn who walked away with the Best Supporting Actor Oscar for his role as the abusive and cruel Glen Whitehouse, this is no one’s film but Nick Nolte’s. His supporting cast is solid (particularly Coburn, who I tend to think of as a nice guy, which made this role an interesting stretch), but every scene focuses on Nolte’s breakdown and loss of control over his life and his emotions. It wouldn’t be going too far out on a limb to suggest that this is the best thing that Nolte has done in his career, which is saying something.

Affliction is not the sort of movie to sit down and watch with a bowl of popcorn. This is one to let wash over you, to seep into your pores and feel the weight of it drag you down. At each step in the film, we understand exactly why Wade feels and acts the way he does and we also understand exactly why each thing he does is precisely the wrong thing. There is a weight on him that he cannot lift away; the more he struggles, the more it crushes him, but struggling is the only thing he knows how to do.

I could live without the voiceovers. They add something, perhaps, but they also are too on-the-nose for me. There are realizations here that might well be stronger if the audience were allowed to reach them of their own accord. This doesn’t damage the film terribly, but I’d love to see it without the voiceovers to see if the conclusion held the same power.

Why to watch Affliction: Film noir darker than the darkest film noir.
Why not to watch: The slide and crash is awful to see.