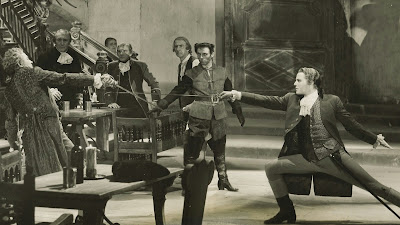 I typically use Turner Classic Movies for films that I can’t find anywhere else. There’s a real temptation to record pretty much everything I haven’t seen, but I’d fill the DVR in a couple of days doing that. Anthony Adverse is a film I can find in a library, but can only get on VHS. I missed it on TCM, but caught the film today on TCM’s online service. I gotta say, I dig the online TCM since it allows me to catch films I either missed recording or forgot to record.

In this case, it’s not TCM’s fault that Anthony Adverse isn’t very good. This isn’t even a case where it’s a film that was good for its time but hasn’t aged well. I’m not convinced that Anthony Adverse was a good film for 1936. It’s overlong, for starters. The drama is drippy, the romance doesn’t work. In fact, the only thing I like in it is something that I found funny that certainly wasn’t intended to be humorous.

The opening 30 minutes or so is backstory, and most of it could’ve been easily handled with a text scroll. Considering how often this film likes to toss up titles that further the plot, it would’ve saved time and frustration on my part. Anyway, we have the fairly assholish Marquis Don Luis (Claude Rains) who has recently married Maria Bonnyfeather (Anita Louise). Unbeknownst to him, Maria is pregnant by her lover Denis Moore (Louis Hayward). Don Luis finds out, kills Denis in a duel, and has Maria give birth to the baby in northern Italy. She gives birth to a son but dies. Don Luis tells Maria’s father John (Edmund Gwenn) that both Maria and the boy died. The baby is left at a convent where he is named Anthony since he was found on June 13, St. Anthony’s day.

Eventually, Anthony grows up and is apprenticed off to a local merchant. In a coincidence of Dickensian proportions, Anthony is apprenticed to John Bonnyfeather, his grandfather. John suspects that the lad may well be his grandson and raises him in the business. It is he who names him Anthony Adverse due to all of the troubles the young boy has had.

Fast forward a bunch of years and Anthony (Fredric March) is now a man and in love with Angela (Olivia de Havilland), the daughter of Bonnyfeather’s cook. The two lose track of each other for a few years and then rediscover each other and quickly get married. Sadly, Anthony is sent off to Cuba to protect Bonnyfeather’s interests, something more important because of the impending wars in France thanks to Bonaparte. Communications get mixed up, Angela goes off to pursue a career in opera, and Anthony discovers that the holdings in Cuba are a slave trading business now housed in Africa. So off he goes to make sure that Bonnyfeather gets his money back.

And so we get our morality portion of the film where Anthony works in the slave trade for years to make money for Bonnyfeather despite being constantly guilted by a monk named Brother Francois (Pedro de Cordoba). He heads back to Europe to search for Angela only to discover that John Bonnyfeather is dead and has left him a fortune, provided he can prove who his is. This takes us to the intrigue part of the film where we learn Bonnyfeather’s old housekeeper Faith Paleologus (Gale Sondergaard, who won the first-ever Best Supporting Actress Oscar for this role) stands to inherit Anthony’s money if she can prevent him from claiming it. Oh, and she’s now hooked up with Don Luis from the beginning. Oh, and there’s Napoleon. Oh, and Angela has changed her name and is singing opera and has become the mistress of Napoleon. Oh and…oh and…

Deep, long sigh. This is a film that is overly complicated, filled with unnecessary events and includes huge chunks of story that didn’t need to be filmed in the first place. Anthony Adverse makes the mistake of believing that having a bunch of plot points is the same thing has having a plot. Most of the characters are forgettable, which is surprising considering the quality of the cast. I typically love Claude Rains and he makes a slightly nasty and entertaining villain here, but he’s not on screen nearly enough. I also like Fredric March and Olivia de Havilland, but neither is used to much good effect here. In fact, the true star of the cast is Gale Sondergaard, who goes from housemaid with pretensions to a woman of substance by the end of the film and never once breaks from her deviousness. Alas, she’s not in the film enough, either.

Anthony Adverse runs about 141 minutes and feels about double that. The limited moments of action are silly at best and most of the rest is people standing around talking at each other about their investments. Aside from Sodergaard, some decent cinematography, and a pretty good score, there’s nothing here really of note. It’s mildly disappointing that Anthony goes to “Africa” rather than a specific country or part of Africa. That’s just sloppy.

I can’t even really say that this is a poorly made film. It’s just boring, and that’s a much worse crime than being badly made. I’ll watch a crap movie if I’m having fun with it. Being dull is the worst sin a film can commit. So what was the one thing that entertained me? Denis Moore. If you’re a Monty Python fan, you’ve almost certainly seen the Dennis Moore sketch. And that made me laugh.

Why to watch Anthony Adverse: If you’ve got a thing for Napoleonic Era epics, knock yourself out.
Why not to watch: It’s too long and not very good.