This is the first in a series of monthly reviews suggested by the guys at Your Face. This is Jason Soto’s first pick. 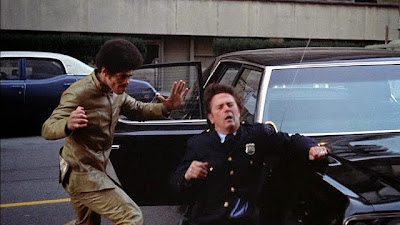 If you read Jason Soto’s reviews over at Your Face, you’ll find that the sort of movies Jason tends to review are substantially different from the sort of movies I tend to review. In truth, that’s one of the reasons I agreed to have him pick some movies for me. It’s too easy to get into a rut, and I need to be broken out of that. What better way to get away from a long string of Oscar movies than a little Blaxploitation? And so, Three the Hard Way, a film featuring three of the biggest African-American action stars of the period seemed like just the ticket.

Like a lot of films in this genre, Three the Hard Way offers up an extreme plot without much exposition. The plot isn’t really the point here. What is the point is a boatload of action, cars exploding, gun battles, martial arts fights, and a touch of gratuitous nudity. All of this is packed into 90 minutes, so such niceties as plot are secondary considerations at best.

We start in what at first appears to be something like a prison, but if it is a prison, it’s the most minimal security prison ever. One of the prisoners (Junero Jennings) makes a break for it by breaking open the lock on the back door of a kitchen with a stolen crowbar and then beating a guard to death with the same crowbar. With the gun he takes off the dead guard, he shoots a couple more, takes a bullet himself, and hijacks a car to take him to Los Angeles. It’s worth noting that all of the prisoners are black and all of the guards are white. This will become important.

In LA, we meet Jimmy Lait (Jim Brown), a very successful music producer. Our escaped prisoner from the start turns up on Jimmy’s doorstep and is taken to the hospital. He raves for a bit about something only vaguely coherent before passing out. Jimmy leaves his girl Wendy (Sheila Frazier) to keep track of the wounded man while he goes back to the studio and lays down some tracks with the Impressions (who also do the soundtrack for the film). While this is happening, a couple of white guys break into the hospital, shoot the wounded man, and kidnap Wendy. When another gang of white guys tries to take out Jimmy, he knows he needs help.

And thus we are introduced to Jimmy’s friends. The first is Chicago entrepreneur Jagger Daniels (Fred Williamson), who has the second coolest name in the film. The coolest name belongs to our third hero, martial arts master Mister Keyes (Jim Kelly), named that way by his mother so people would have to show him respect. The three face some more white guy opposition and, using a trio of topless dominatrices on a prisoner, determine exactly what is happening.

What’s happening is this: a rich white racist named Monroe Feather (Jay Robinson) has hired an equally racist doctor named Fortrero (Richard Angarola) to create a new poison. This deadly poison is deadly only to members of the African-American community; white folks can ingest it with no ill effects. The plan is to release the poison into the water supply of Los Angeles, Washington, and Detroit. So now the three men have to separate, each to a different city, to stop the plan from going into effect. Oh, and they have to locate the evil doctor and the neo-Nazi mastermind and save Wendy.

So, it’s a ridiculous plot. The film pretty much consists of brief set-ups followed by completely implausible action sequences. The bad guys, many of them wearing paramilitary uniforms complete with red berets, tend to drive Explodemobiles that turn into massive fireballs if you look at them cross-eyed. Seriously, at one point, a car bursts into flames because it drives through a billboard. The bad guys can’t hit anything with machine guns while our heroes are pretty much capable of one shot/one kill ratios with pistols at great distances. Near the end, Jim Brown is spraying huge areas of terrain, using his guy like a fire hose he can barely control, and every bad guy in the vicinity drops like a stone.

And you know what? It doesn’t matter. Yes, it’s completely goofy. Yes, the action is unrealistic. Yes, we know going in that the film is going to be painted red with the blood of racist Whitey and that our black heroes will survive, possibly wounded, but definitely on top. And that’s completely okay.

One of the really interesting things about Three the Hard Way is the three heroes themselves. Many times in the Blaxploitation genre (sub-genre?), our hero lived on the fringes of white society. Here, these are men who are a part of the community. They’re business owners, drive nice cars and have flashy clothes. These are respectable guys who just happen to pack huge pistols and can leave a parking garage full of mayhem and dead guys and not have the police barking down their snorkels for doing it.

The supreme moment of this comes when the trio meet up again near the end to prepare for their final assault. Jimmy Lait gets off a cargo plan while his van is being unloaded. He shows the other two what he’s got in the van—the entire back is full to the brim with loaded weapons and dynamite, because naturally a cargo plane would allow a fully-loaded arsenal on a cross-country flight.

And again, it doesn’t matter. The action sequences, particularly the one where Jim Kelly beats the crap out of some racist and crooked cops, are genuinely fun. That’s really what this film is all about. It exists to be a series of action sequences and to serve as the source of destruction for a small fleet of cars. It does that admirably.

Nice choice, Jason. You and your compadres are 1 for 1.

Why to watch Three the Hard Way: It may be impossible to completely dislike a movie featuring Jim Kelly.
Why not to watch: It’s connection to actual reality is pretty slippery.

Posted by SJHoneywell at 1:02 PM