Blue is the Coldest Color, Too 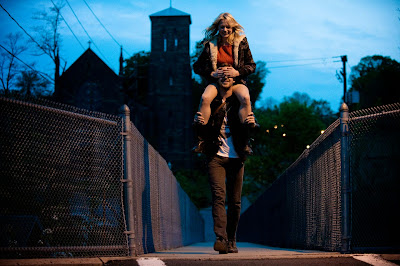 The January NetFlix streaming purge ended with the loss of Blue Valentine, a film that I ended up watching specifically to make sure that I got it watched before it disappeared. I can’t honestly say that this was one I wanted to watch today, which made this more of a forced watch out of necessity than anything else. I’m not always in the mood for films that make me hate life, and Blue Valentine is that sort of film.

Cindy (Michelle Williams) and Dean (Ryan Gosling) are a married couple with a young daughter named Frankie (Faith Wladyka). Dean very much gives the impression of being the fun parent while Cindy is the responsible one. This is not a false impression. As the film goes on, we learn that Cindy has a responsible job as a nurse and that Dean, a high school dropout, paints houses and has worked at unskilled odd jobs his whole life. Cindy and Frankie are the center of Dean’s world while Cindy longs for something more or something different, or really just something.

About half of the film is told in flashback, showing us how Dean and Cindy met and their whirlwind courtship. At the time of their meeting, Dean worked for a moving company. Cindy, in a relationship with a violent thug named Bobby (Mike Vogel), who we learn is the most likely father of Frankie. Despite this, the two get married.

All of this is well and good, but it’s not the point of the film. The point of the film is very much that the bloom is off the rose in this relationship. Dean’s complete lack of ambition, his desire for nothing more than he already has clashes regularly with Cindy’s desire to have something more in her life. And ultimately, what she wants is something more than Dean. The fact that she grew up in a home with parents who desperately hated each other influences her actions surrounding Frankie and how Frankie will grow up.

This is an unpleasant movie. I’m not saying that in specifically a bad way, but it’s just true. Blue Valentine very much attempts to show the lives of these two people as something real. There’s no glamor here, no grand romantic gestures beyond what is actually real and believable. Dean’s grand romantic gesture, in fact, is to suffer a beating from Bobby and marry Cindy anyway, and to be a father to a child that more than likely isn’t his. Even the sex in this film is kind of ugly because it’s not glamorized at all.

It would be easy to suggest that Blue Valentine is the story of a couple of deeply troubled people, but it’s really not. These are simply people who have troubles and those troubles are more than they can bear. One of the more interesting and plausible theories I’ve heard about this is that Blue Valentine is a spiritual sequel to Say Anything. I can see that. We’ve got a man who wants nothing more than to make his wife happy and who ultimately fails at it and a woman who wants more than he is able to give her. There’s a lot of Lloyd Dobler in Dean; he’s a guy who really wants nothing more than what he has and doesn’t understand why anyone would want anything more.

And so, at its heart, Blue Valentine purports to be a romance, but is really a tragedy. The tragedy is that these two people both belong together and do not belong together, and there is no way to make everything work out.

Is it good? Yeah, it is. Michelle Williams earned an Oscar nomination for this film, and I’m not sure I’d suggest that she shouldn’t have. I’m surprised at the lack of nomination for Ryan Gosling, though, who had a much more difficult job in my opinion. Gosling need to be the derelict that Dean is and still be at his heart the guy that we root for. The genius of Blue Valentine is that we understand Cindy, but we like Dean.

That said, this is not one I’ll sign up to watch again soon.

Why to watch Blue Valentine: It’s real.
Why not to watch: It’s unpleasant.