Dolphins are for Wusses 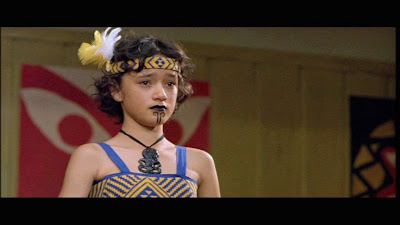 Chip Lary at Tips from Chip has been proselytizing to me about the film Whale Rider. The only reason it didn’t show up on his list of films for me for this year was that it appeared on my Oscars list (and he gave me another New Zealand/Maori film to compensate). This is one of those films that I figured I’d better watch soon so that his head didn’t explode, so when I spotted it on the library shelves the other day, I figured it was time to watch Whale Rider, if only to prevent the possibility of Chip overselling it to me.

We are immediately thrust into a patrilineal culture and witness the birth of the grandson of a tribal chief of a Maori group. As it happens the wife of the chief’s son dies in childbirth as does the grandson. But the wife had twins, and the surviving child is a daughter named Paikea, the name of the original ancestor who is alleged to have come to New Zealand riding on a whale. The grandfather, Koro (Rawiri Paratene), is upset about the death of his grandson and seems not to care much about the death of his daughter-in-law. He’s also upset about the name of his new granddaughter. Paikea’s father Porourangi (Cliff Curtis), unable to deal with the death of his wife and son, leaves, entrusting his daughter to his parents.

Flash forward a dozen years and Paikea (Keisha Castle-Hughes) is a young woman more or less searching for her identity in a culture that demanded that she be a boy. Koro is obviously fond of his granddaughter, but is also frequently harsh. Paikea has interest in the old ways that Koro endorses, but as a girl, she is unable to be a part of them. She tries anyway, and in so doing, angers Koro.

Feeling that he has been abandoned by his ancestors and that the troubles in the group started with Paikea’s birth, Koro starts a traditional school to teach the first-born boys in the community about the old ways. Paikea watches and attempts to learn these ways herself, learning the various chants and how to wield a taiaha, which is essentially a staff. She is assisted in this by her uncle Rawiri (Grant Roa), who was once very adept in the fighting style and won trophies for his skill. Her training is discovered, though, which again angers the old man who feels that his school has been destroyed by a girl undergoing the training, especially when she beats her friend Hemi (Mana Taumanunu) in a taiaha battle.

Desperate for a future leader, Koro takes the boys out in a boat and throws his ceremonial whale tooth over the side, but all of the boys are unable to recover it, something Paikea does the next day. And when whales beach themselves nearby, Koro takes it as a terrible omen, so Paikea takes it upon herself to take them back to the ocean by recreating the legendary feat of the original Paikea years before.

Whale Rider is very much a coming-of-age story, and one of the first I’ve seen in a long time that features a young girl coming of age without the specter of sex cropping up. Paikea’s coming of age is entirely about her connection to her past and the traditions of her people. Because of this, Whale Rider is a film about traditions and about community. In short, it is about, in many ways, the purpose of those traditions. Paikea’s effort to retain the old traditions is both a connection to that tradition and a violation of it. So the question becomes what is more important, the traditional ways and the connection to the past, or following the letter of those traditions and being hidebound to them?

The focus of the film here is Keisha Castle-Hughes as Paikea, as well it should be. This is a story that would not work for a second if we didn’t believe everything about Paikea, and Castle-Hughes’s performance does this admirably. There’s not a moment in the film where she doesn’t come across as exactly what she is—a young girl who wants nothing more than to be what her grandfather wants and who is incapable of being that because she was born the wrong gender. This is a mature, adult performance from a child actor, and one of the best I’ve seen in a very long time. She is a perfect combination of strength and vulnerability, of the child she is and the adult she determines that she needs to be.

Similarly, good performances are required from Rawiri Paratene as her grandfather and from Vicky Haughton as her grandmother, who is far more supportive and real in many ways. Paratene needs to balance his love for his granddaughter with his anger at what he sees as her presumption, a mix of tenderness and anger that is entirely believable. For Haughton’s part, she needs to be both tough and unyielding and completely supportive.

Better, this is a story that is connected both to the real world and that contains a touch of magic to it as well. It is perhaps too predictable in certain ways, but it manages to be relatively fresh in a lot of ways, too. There are particular moments in the film that have some obvious places to go, and Whale Rider avoids many of them.

Whale Rider is a grand story, and one perfectly appropriate for families. I can see kids loving this movie and finding a lot admirable in the character of Paikea. The lessons here are good ones, and ones worth learning for viewers of any age.

I’m glad I watched it, and I’m glad I did so soon enough to prevent it’s being overhyped. This is hardly a perfect movie, but it’s one of the best of its type I’ve seen in a very long time.

Why to watch Whale Rider: It’s damn good.
Why not to watch: It may feel too predictable in places.