Dick Nixon Before He Dicks You 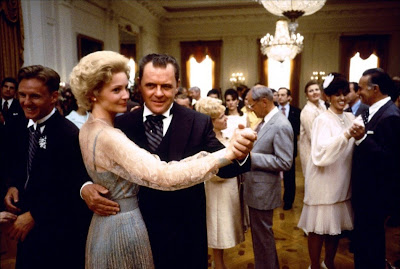 If you go into Nixon without knowing it was directed by Oliver Stone, you’d know it was an Oliver Stone film within a few minutes. I’d seen pieces of it before, but only pieces, but I remember those pieces well, much of that coming from Stone’s style. What I find interesting here is that the Stone movie I am most reminded of when watching Nixon isn’t Platoon or JFK but Natural Born Killers. There’s a great similarity in style here—the fragmented narrative, the montage pieces, the shifts to archival footage that unites those two films in particular.

The version of Nixon I located was the director’s cut, which adds almost half an hour to a film already hitting north of three. The main benefit of the extended cut of the film is the inclusion of Sam Waterston as CIA director Richard Helms. I like Sam Waterston, but I’m not sure he was worth the extra 28 minutes.

Anyway, as the title of the film implies, this is the story of Richard M. Nixon, the 37th President of the United States and the only man to resign the presidency. Naturally, the backdrop of the film is placed a great deal on Watergate and the cover up surrounding the break-ins. This is, I believe, the third film I’ve watched for this blog dealing with Watergate (All the President’s Men and Frost/Nixon being the previous two). That said, Nixon delves into much different territory as well. While Watergate and the various players surrounding it and involved in it are critical here, it is Nixon himself, his personality, his fears, his paranoia, that take up the bulk of the narrative.

What this means for us watching is that the main narrative here is the Watergate break-in and cover up, but we take frequent side trips into Nixon’s past—his childhood, the deaths of two of his brothers, his failed football career, his time as Eisenhower’s vice president, and his failed run for the 1960 presidency and the 1962 governorship of California. The function of these flashbacks is not specifically for us to understand the history or even the story of Richard Nixon, but to understand his mentality and from whence came his almost legendary paranoia, fear of exposure, and need for love, respect, and power.

Oliver Stone still had a great deal of cachet in 1995, which means that Nixon suffers from an embarrassment of riches in terms of the cast. Front and center, of course, is Anthony Hopkins as Nixon himself. The genius of Hopkins’s performance isn’t that he looks like Nixon (he really doesn’t) but that he acts like him and manages to sound like him, too. Hopkins very much becomes Nixon by virtue of adopting everything possible about the man except for his physical appearance, and because of this almost starts to look a bit like Nixon by the end. It’s also an interesting but subtle piece of filming that Hopkins plays Nixon as a man overwhelmed by everything around him. Hopkins himself is about three inches shorter than Nixon was, and this makes him look vulnerable in a number of scenes. Contrast this with Frank Langella’s Nixon in Frost/Nixon where the 6’3” Langella comes across as almost a hulking brute.

Second on this list, but hardly second in terms of performances is Joan Allen as Nixon’s wife Pat. I tend to like Joan Allen in general, but I’m not sure she’s ever been better than she is here. This is not an easy role to play. Pat Nixon needs to walk a careful line between love for her husband and hatred of him at the same time. Allen plays it perfectly, and was justly rewarded with a Supporting Actress nomination.

The cast member I’ve left off this list until now is Paul Sorvino as Henry Kissinger. Sorvino is unrecognizable in this role, and I mean that as the strongest compliment I can make. His lack of a nomination for this role where he looks, sounds, acts, thinks, and presents like Kissinger is more than merely an oversight. It is both brilliantly played and brilliantly cast. The man is genius here.

The truth is, though, that like a lot of Oliver Stone films, Nixon is simply too long. The theatrical release was too long and the director’s cut just makes that a larger issue. But really, that’s the only issue I have with the film.

What’s the most interesting to me here is that Nixon could have easily been polemical. It’s not, which is surprising, given Stone’s politics. The film more or less tries not to condemn Richard Nixon but to understand him, and in so doing, humanize him. He was a deeply troubled man, but perhaps far less the criminal than everyone though in the mid-1970s. Then again, this is Oliver Stone, and historical accuracy has never been his strongest suit.

Why to watch Nixon: A gripping portrait of a deeply troubled man.
Why not to watch: Is Richard Nixon worth more than three hours of your time?