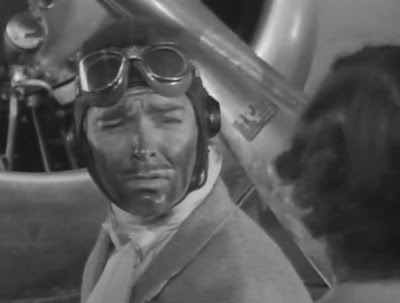 As TCM’s 31 Days of Oscar rapidly approaches, I find myself in a position of still having a DVR that is disturbingly close to full. Part of that is that I have a backlog of films that I just haven’t watched yet. Part of that is that I live with a wife and two daughters who record shows and evidently have no desire to ever watch them once they are recorded. I can only do my part to clear my stuff to make room for more, so here I am, watching films that I put on the DVR months ago. Eventually, I’ll catch up. At least that’s what I tell myself. I realized recently that among my recordings are the last three Best Picture films I haven’t seen from 1938. I picked Test Pilot for no real reason save that it was one of those three.

The obvious draw for the time was Clark Gable, but there are a few other joys here, at least for me. Primary among them is Myrna Loy, who I love. If I hadn’t already decided that my classic movie sweetheart was Barbara Stanwyck, Loy would be my choice. In addition to being drop-dead gorgeous, she was also a fine actress and possessed of brilliant comic timing, although that is on display here only a bit. Also present is Spencer Tracy, who is rarely disappointing. And there’s Lionel Barrymore, who seems to have been in pretty much every film of this period.

Enter the world of the test pilot back in the early days of aviation. I don’t want to downplay this at all—the men who strapped themselves into experimental aircraft back in the day had serious cojones, as do the people with this job today. The test pilot in question here is Jim Lane (Clark Gable), who lives as hard as he works. Most nights, Jim is out drinking and picking up as many women as he can, living as much as he can since he is almost destined to die in the air at the whim of some wonky machine. His friend and mechanic Gunner Morris (Spencer Tracy) more or less acts as his nursemaid, making sure that Jim gets into the cockpit every morning.

Jim sets off in an experimental craft at the behest of his boss (Lionel Barrymore) in an effort to break the cross-country speed record. A blown pump forces the plane down in Kansas, where Jim encounters Ann Barton (Myrna Loy). The two are quickly enamored of each other and spend a day together. As happens in Hollywood movies of the time, a day together is enough and past a little rough patch, they end up married the next day.

Ah, but marriage isn’t all it’s cracked up to be with a test pilot. Fired from his job for wanting a honeymoon, Jim takes a job with another aircraft company and pilots their experimental plane in a speed race. He wins, but the plane he should have been flying crashes, killing the pilot. Jim gives half of his prize winnings to the dead pilot’s widow and blows the rest on a five-day bender. Chastised when he gets home, he vows to take any piloting job offered and turn the money directly over to Ann. What this means is that the crazier the job, the more he gets and the more Ann frets over the idea that she’ll wind up a widow before her next birthday.

And that’s it. We get a little bit of marital bliss right after the wedding that essentially sets up Jim’s “live for the moment” spendthrift ways but goes on too long. The rest of the film is him dealing with the demons of drink (which he gives up without a whimper) his love of flying, and the inherent danger in the job. Clark Gable’s job is to be a daredevil pilot, a role that was not much of a stretch for him—the man flew combat missions over Germany a few years after this film was made. The real acting comes from Spencer Tracy, who needs to be both friend and goad, and from Myrna Loy, who has to be supportive of her insane husband when around him and driven to near suicide when he’s in the air. Those two performances are easily the best part of this film.

What doesn’t work is some terrible rear projection work and some of the most ridiculous models I have seen in a film. The airplane race in particular is quite obviously a set of models being suspended over a moving picture of a landscape. It may well have worked for audiences in 1938, but today the effect is so obvious as to be comic.

I don’t want to downgrade the film specifically because it’s not up to the technical snuff of modern films, but it’s hard not to. For me at least, the minute we get to an actual action sequence, all of the tension drains away because we’re so obviously looking at toys. And just 10 years previous, incredibly good work was done on the film Wings.

This is a standard plot with lousy technicals absolutely rescued by a top-of-the-line cast turning in good or better performances. And that’s really all there is to say about Test Pilot.

Why to watch Test Pilot: The base story is a good one.
Why not to watch: Some of the worst special effects you’ll ever see.