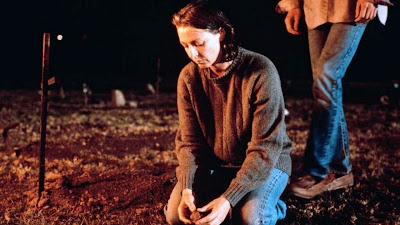 If you’re roughly my age, you remember what growing up in that part of the Cold War was like. I’ve mentioned this before, but it’s been awhile. My friends and I didn’t talk about what we’d do if the bombs dropped; we talked about what we’d do when it happened. It seemed inevitable. This constant dread created an odd little subgenre that wasn’t unique to the 1980s, but really seemed to hit its stride in that decade. The Day After and Miracle Mile are relatively well-known, and Threads is known to a certain collection of film viewers. So it’s odd to me that Testament seemed to slip through the cracks.

Testament comes in at just about 90 minutes, and it uses its time very wisely. The first 20 minutes or so sets up the Wetherly family. Father Tom (William Devane) works in San Francisco and spends his mornings riding his bike with his older son Brad (Ross Harris, recognizable almost immediately as the kid from the cockpit scene in Airplane!). Mother Carol (Jane Alexander) stays at home and helps out at the school of younger son Scottie (Lukas Haas). Oldest child and lone daughter Mary Liz (Roxana Zal) helps out with Scottie’s school play on the piano. We’re given a nice, completely normal American suburban family.

And then, one day Scottie’s viewing of Sesame Street is interrupted. The entire Eastern Seaboard of the United States has lost radio contact. Just as the president is coming on screen to warn the nation about nuclear attacks that have happened throughout the country, there is a blinding flash of light; San Francisco has been hit by a nuclear weapon.

The rest of the film is what happens in the terrible aftermath. Food rationing, fallout, shortages, radiation sickness, and so many deaths that burial becomes too difficult and mass graves are burned instead. There are fights over canned goods, and slowly, inexorably, both the community and the Wetherly family begin to dwindle.

I remember watching The Day After, which also came out in 1983, on television. It was scary, but it also very much felt like a movie. Quite a bit of what happened felt like Hollywood as I recall. This is absolutely not the case with Testament. This feels real. The emotions, which start out angry, scared, raw slowly deaden over time. Death that causes terrible pain and irrationality at one point causes numbness half an hour later. It simply becomes overwhelming by the end of the film.

There are a number of key performances in the film that make everything work. Primarily, this is the role of Jane Alexander’s Carol. While not always the emotional center of the film, she is absolutely the focal point of everything that happens. Most of what we see we see through her eyes and in her words as she keeps a journal of the aftermath of the bombs. It is Carol who has become emotionally numb by the end with so many losses to deal with, and it is her numbness that infects us in the audience. This would have been an easy role to turn into melodrama, and Alexander avoids it, going instead for a reaction that might seem artificial on the surface but becomes incredibly natural and believable by the time we get to it.

Ross Harris also gets a great deal of the credit for making the film work. Brad could become a comic figure easily. He is extremely eager to please and to help out with everything going on around him. In Harris’s hands, Brad matures quickly and believably, going from a young child into not merely a man, but a decent one despite the terrible circumstances. It’s a lot to put on the shoulders of a young actor—he was about 14 when the film was made—but he delivers throughout.

It’s also worth mentioning William Devane, who is only in the film for a short time. Devane always comes across as a guy who plays sleaze really well. Initially, I had a difficult time buying him as a normal, decent father; I almost expected this to turn into a domestic drama with Devane as the villain, because that’s how I tend to think of him. But no, that’s not the case here, and he sets up the father and the loss of the father (remember, he worked in San Francisco) as a real thing—we miss him when he’s gone. We also get short cameos from a young Kevin Costner and Rebecca De Mornay as a married couple and by the great Mako as the owner of a service station.

A great deal of the credit here goes to director Lynne Littman. As with Jane Alexander’s performance, this is a story that could have become melodrama or television movie-of-the-week without tight control. Littman is smart enough to give us just enough information to follow the story without dwelling on the horror. There’s horror enough here, and she realizes it, and is smart enough to let us realize it on our own without forcing the audience to wallow in it. She shows admirable restraint in making the film and not giving in to the easy temptation of the vast potential for sensationalism.

I’m impressed. This is the sort of film that lingers, and I can only imagine the power it would have held in the middle of the Reagan years. Even now, 30 years after the fact, it still manages to be powerful and to have the ability to sober us so much that it doesn’t outrage or make us scared. It makes us numb to protect our own emotional well-being.

Why to watch Testament: It encapsulates the fear of nuclear war perfectly.
Why not to watch: By the end, you’re numb.