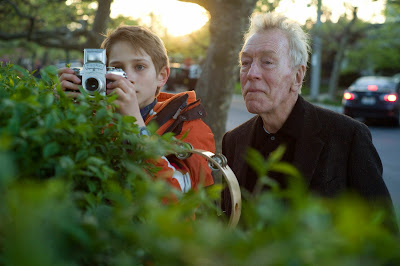 I’d like to say that Extremely Loud & Incredibly Close is the movie most likely to be forgotten as a Best Picture nominee, or the one that will seen as most unworthy of a nomination from 2011, but I’m not sure either claim would stick. After all, both Hugo and War Horse were Best Picture nominees from the same year. To my knowledge, though, it’s the only film in the Internet age to have a negative Rotten Tomatoes and Metacritic score (46 on both sites) to be nominated for Best Picture. Make of that what you will, but I have to say that I agree with Rotten Tomatoes and Metacritic.

Extremely Loud & Incredibly Close is a post-9/11 film. Admittedly, everything that was produced after September 11, 2001 is a post-9/11 film, but in this case, it’s relevant to the day in question. Oskar Schell (Thomas Horn) is a kid who lives in New York. Oskar’s particular quirks are never officially diagnosed for us. He’s right in that middle space between Asperger’s stereotype and home-schooled kid stereotype. Anyway, he has a close relationship with his father, Thomas (Tom Hanks). Thomas likes to propose strange questions and quests for Oskar that force the boy to talk to people, something he allegedly has a problem doing. Much of their conversation revolves around a mythical sixth borough of New York.

As it happens, Thomas Schell was in the World Trade Center on 9/11 and was killed in the attacks. Oskar hides the answering machine tape of his father’s frantic calls so that no one else will hear them. About a year later, Oskar discovers a key in a blue vase inside his father’s closet. The key, in an envelope marked “Black,” becomes the central theme of the film as Oskar embarks on a quest to interview everyone in New York with the surname of Black to discover what the key opens.

Accompanying him on this quest is a man known only as The Renter (Max von Sydow). The Renter doesn’t talk. Instead, he communicates with written messages and by having “yes” and “no” tattooed on each hand. As the film continues, Oskar and the Renter become closer even as Oskar drifts further and further away from his mother (Sandra Bullock, who is in the film about as much as the building doorman, played by John Goodman). And always there is this desire to find out what the key opens and uncover this final mystery left to him by his father.

So that’s the guts of the film. And almost none of it works. Even if I found the premise interesting, which I don’t in particular, there are too many things here that simply don’t work to make this a cohesive and coherent film from start to finish. The bulk of this focuses firmly on the character of Oskar. I imagine that we are supposed to be entranced and charmed by this kid who has more quirks than television detective Adrian Monk but also appears to be possessed of a bright and inquisitive mind. Sorry, no. Oskar is an annoying little shit. His particular fears may well be understandable but are not remotely sympathetic. And his fears—subways, buildings, bridges, tunnels, and on and on—conflict directly with how this kid interacts with the world.

I’ll be more specific. One of Oskar’s problems is that the 9/11 attacks don’t make any sense to him. There’s no reason his father should be dead and no reason that planes should fly into buildings. This ought to make him terrified of strangers, yet he has no problem talking with anybody about whatever flies into his head. He’s rude, aggressive and off-putting, which conflicts with the entire plot point of his father giving him these quests to force him to talk to people. Remember, Oskar is supposed to have an issue with talking to strangers, and at no point does this appear. In fact, the first person he encounters on his quest to discover the meaning of the key is named Abby Black (a terribly mis- and underused Viola Davis). In this encounter with a woman he has never met, Oskar barges into her house, asks her a series of extremely personal questions, takes a photograph off a stack of boxes, snaps a picture of her, and kisses her. This is a kid with a problem talking to strangers?

Beyond this, his quirks are annoying beyond all bounds of reason. He wears a gas mask when forced into the subway. He carries a tambourine (more evidence of his Asperger’s/autism) that he shakes constantly. I get that Thomas Horn’s performance is a good one, but the character is so annoying that it’s hard to care.

Oskar’s abrasive personality is hardly the biggest flaw in Extremely Loud & Incredibly Close. The biggest issue I have with this film is the same issue that most people have with it. It’s so obviously a film created specifically to garner positive praise around award time. It’s so blatantly manipulative that it fails to manipulate. Watching, the audience knows what emotional beats are going to happen. We figure out who the Renter is long before we’re told, and when we “find out,” it’s anti-climactic. But we’re still supposed to have that emotional reaction to it. We’re supposed to have that same reaction when we discover exactly what this whole quest has been about. And it all fails because we can see exactly how the knobs and dials are being turned.

Because of this, Extremely Loud & Incredibly Close feels like little more than a blatant ploy to force us to like a film because of its subject matter. My goodness, if we don’t like this story of a kid dealing with 9/11 we must be heartless and anti-American. As a result, it ends up being a step different from the ASPCA ads with Sarah McLachlan and not a full step, either. There’s potential for real stories in tragedy, and with any real tragedy, there’s no need to so blatantly shove things in the face of the audience. The makers of this film should have known that. Even the normally wonderful Max von Sydow (who was inexplicably nominated for Best Supporting Actor for this) can’t change that fact.

Why to watch Extremely Loud and Incredibly Close: A very different 9/11 story.
Why not to watch: None of these characters are worth five minutes of your time.