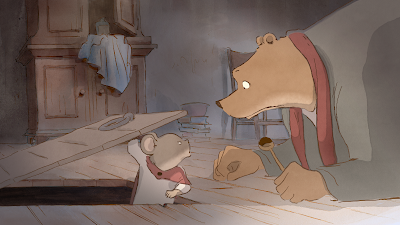 If you have a library card, I can’t recommend looking into Hoopla Digital strongly enough. Download movies for free, keep ‘em for a few days, watch ‘em at your leisure. I wish I’d discovered it earlier. Tonight I checked out Ernest et Celestine (Ernest & Celestine), watched it immediately, and returned it pretty much without leaving my chair. And since the titles get returned automatically, I didn’t even really need to return it. Okay, if you’re a purist and insist on watching this subtitled in the original French I’ve got nothing for you. That matters very little to me with animated films, so I honestly didn’t care.

Like many a movie made for children, there is a moral at the heart of Ernest & Celestine, which is obvious once you get to it but no less worthwhile because of its obviousness. We start in the mouse world with Celestine (Mackenzie Foy), an orphan who enjoys drawing pictures and making up stories. The mice live in terrible fear of bears, who they believe will eat them without any provocation. However, the mice are necessarily thrust into the city of the bears above their underground city. The entire mouse civilization is built on their incisors, and the best replacement for these should they wear out is bear teeth. In fact, the bears tell their children that mouse tooth fairies take their teeth, when it’s really just mice looking for replacement teeth.

Meanwhile, Ernest (Forest Whitaker) wakes up hungry but has no food in his house. He straps on his one-man band outfit and makes his way into town where he plays in the hopes of a handout, either food or money. He’s given a ticket instead, and starts rooting through trash cans looking for food when he comes upon Celestine, who got there by misadventure attempting to retrieve the tooth of a young bear. At first he wants to eat her, but she convinces him that she wouldn’t do much to fill him up. Instead, she helps him break into a candy store basement where he begins to gorge himself.

However, because she has returned with only a single tooth, Celestine is kicked out of the mouse world until she can bring back 50 teeth. Meanwhile, Ernest is discovered in the candy store basement and is arrested for theft. Seeing an opportunity, Celestine frees Ernest, who then helps her rob a bear dentist of spare teeth, allowing her to return home. But he then falls asleep in the mouse world, causing a ruckus that causes the pair to flee. And they’re also in trouble in the bear world, which leads them to live a life of seclusion, at least until the winter ends and both the bear and mouse police forces can track them down.

It’s actually a pretty complex plot for a film that comes in at under 80 minutes. It is also unbelievably cute. It seems that often the Academy selects an animated film specifically for the way it looks in contrast to the typical animated film. Ernest & Celestine has the look of a watercolor painting come to life. While there are moments that the film is lush and filled with things to look at, at other times the art is minimalist, but no less beautiful to look at. Certainly there will be those who object to it not looking like computer-generated Disney/Pixar, but those who are of that opinion are missing a real visual treat.

The world building is wonderful as well. Both the mouse and bear societies are completely coherent and great fun. Many of the characters, even those who are secondary or tertiary, have actual personalities. We know quite a lot about the bear who runs the candy shop, for instance, just from the part where Celestine attempts to steal his son’s tooth. Both Ernest and Celestine are completely fleshed characters who have actual backstories. This is writing that takes its audience seriously enough to make a coherent and understandable world.

And the voice talent is great. In addition to the two leads, we have William H. Macy, Lauren Bacall, and Paul Giamatti lending their voices. This too is one of the pleasures of the film. The people performing in it take it seriously as well.

I’ll say it. I’m not prone to gushing, but Ernest & Celestine is absolutely enchanting. If you like animation at all, if you have young children, if you’re just looking for something a little bit different, you will not go wrong here. This is a wonderful little film. I can only hope the studio continues to make films in the same style.

Oh, and the message? Watch it for yourself. It’s obvious, but it’s also one that can’t be repeated enough to children.

Why to watch Ernest et Celestine: It is ridiculously, adorably cute.
Why not to watch: It could be another 20 minutes longer easily.