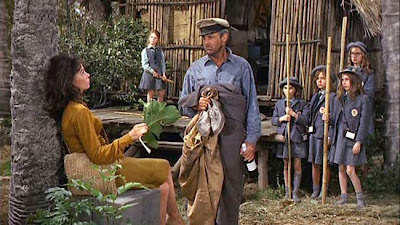 I’ve often made the comment about films that don’t know what they want to be on this blog. Rarely have I encountered a film with as severe multiple personality disorder as Father Goose. Is it a war film? Yes. Is it a romance? Yes. Is it a screwball comedy? Yes. Oh, it’s all these things and more wrapped up in a packaged just under two hours in length.

Walter Eckland (Cary Grant) is a former history professor turned South Pacific beachcomber. As the Japanese begin island hopping across the ocean and the British Navy prepares to retreat to Australia, Eckland shows up at the British base to confiscate supplies. Here he is coerced by his friend Commander Frank Houghton (Trevor Howard) into becoming a coast watcher. He’s more than coerced—Houghton specifically damages Eckland’s boat, preventing him from leaving. He also hides Eckland’s whiskey around the island, promising a bottle for each confirmed sighting of Japanese planes or ships.

It’s not too long before another coast watcher is put in danger and Walter is asked to go rescue him, which will also give him an out as a coast watcher. Walter heads off to the nearby island and discovers the coast watcher dead. In his place is Catherine Freneau (Leslie Caron) and her charges—seven school girls who were under her care and evacuated, and were forced to land on this island and became stranded.

So, of course, Walter takes Catherine and the girls back to his own island much against his will. Here, exactly what you expect would happen does happen. Catherine proves to be a snooty woman of high moral standards, making her a perfect foil to the hard-drinking and uncouth Walter. The girls are straight out of central casting. There’s the oldest one who develops a crush on Walter, the one who calls herself Harry because she wants to be a boy, the one who doesn’t talk but communicates through biting, the one with the imaginary friend, the two who don’t speak English, and the one who complains constantly about wanting to go home until the end of the movie, when she doesn’t want to go home.

The first half of the women’s time on the island is spent in conflict with Walter. The second half, after some Japanese scouting and a snake bite scare, is spent with everyone working on the same time. This is where the romance between Walter and Catherine starts, and this is the part of the film that doesn’t work. It feels forced. In fact, it feels about like the forced romance in The African Queen, which is more or less a romance of convenience that happens specifically to move the plot forward.

That, and Leslie Caron in the first half of the film are the biggest weaknesses here. Father Goose wants to perpetuate the myth that what a man really wants is for a woman to take charge of him and reform him. Catherine is an irritating, superior, and morally ugly character until her snake bite, when she finally loosens up.

There’s a lot that works here, though. I love Cary Grant in pretty much everything he was in, and he’s great here. Walter Eckland is a really fun character, and because he is played by Cary Grant, he’s also blessed with fantastic comic timing. The film also manages to avoid some of the obvious stereotypical tropes that I expected to see and was glad to note the film avoided. For instance, there’s a scene midway through where Walter fishes by standing quietly in a small inlet and grabbing fish and tossing them onto land. Catherine, assuming she can do anything that the drunken and sloppy Walter can do, tries and fails both miserably and comically. I expected the film to give her the ability to prove her constant superiority, and it doesn’t.

Similarly, Catherine is quick to slap Walter whenever she thinks he’s acting like a cad, and he’s quick to slap her right back. He eventually wins over Catherine because he wins over the girls on his own and even makes the silent child start talking. Again, these are good things, and evidence that the screenplay takes the characters and us as the audience as something more than idiots.

I enjoyed Father Goose. It’s also one of the first times I’ve liked Leslie Caron, even if I only liked her for about half of her screen time. This is an entertaining film if not one that rewrites the movies or even causes any thoughts that last more than a couple of minutes after the credits roll.

Why to watch Father Goose: While it doesn’t know what it wants to be, what it is is fun.
Why not to watch: You’ll cheer when Cary Grant slaps Leslie Caron.