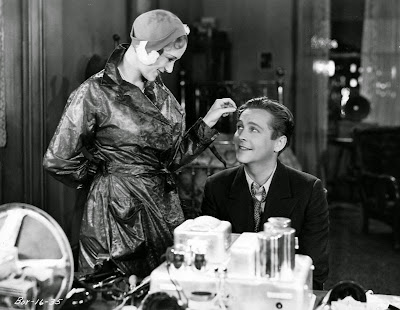 The “idiot plot” is a movie plot where all of the problems of the plot could be solved if the principle characters just had a conversation about what was going on. For a modern film, it’s pretty unforgivable, but it’s easier to overlook in a film that was released a couple of years after the advent of sound. Bad Girl is exactly this sort of film. Our two principle characters spend the entire movie not communicating with each other, which leads to everything that happens until the end.

Dot Haley (Sally Eilers) has a job modeling clothing, particularly bridal gowns, to patrons of the story she works in. She finds that the male customers in the store do little but try to pick her up. She does her job as best she can and enjoys her evenings at Coney Island with her friend and coworker Edna Driggs (Minna Gombell). For these two, men are little more than things there to harass them, so it comes as a shock to them both when they discover a man at Coney Island who seems completely uninterested in flirting with them. This turns out to be Eddie Collins (James Dunn), although he offers Joe as his name. “Joe” and Dot get to talking and more or less insult each other. Before you can say “doodley-doodley-doop” we’re back at Dot’s place and the pair are making plans to see each other again.

Eddie is a man with a plan. He’s been saving up his money to open up his own radio shop. He’s pretty much adamant that he doesn’t want any romantic entanglements, which means of course that he and Dot quickly become an item. After a couple of missed engagements with each other, the two stay out all night, which causes friction between Dot and her brother. To deal with this, Dot and Eddie decide to get married.

I’m going to short-circuit this. They get married and shortly thereafter Dot finds herself pregnant. This is a problem because Eddie seems to be staunchly anti-children. Edna tells Dot to give Eddie the news, but she balks and tells him she wants to go back to work. Eddie decides that that means she’s bored in the apartment all day, so he blows his money he had saved up for his shop to rent them a much nicer place. Once he finds out about the baby, he starts working himself to death to provide, doing side jobs to make more money. But he doesn’t tell her, so Dot thinks he’s just staying out all night. When she decides she doesn’t like her doctor, he arranges for a very expensive specialist, and even signs up for amateur boxing matches to earn money to pay for things. But of course, he still can’t tell her this.

That’s really the entire plot here. Eddie, for all of his devotion to Dot and to the coming child, can’t even bring himself to tell his wife that he loves her. He’ll do anything for her, even taking a pretty serious beating (at least for a round—he tells his professional opponent why he’s boxing and the guy takes it easy on him to help him earn more money) to provide. Eddie is a mug, but he’s good-hearted and generous; he just can’t admit to Dot what he’s doing for her.

For her side of the tale, Dot is convinced that Eddie’s silence means that he doesn’t really care about her, the upcoming child, or the marriage. She immediately takes steps to distance herself from her husband so that she can better care for the baby. And at the same time, Eddie is fairly certain that Dot doesn’t want the baby, and he plans to do everything he can to provide for both of them so that his child will have the sort of home he didn’t have.

It really is an idiot plot, because at any number of points in the film, all of the problems our young married couple experiences could be solved with a two-minute conversation. As I said at the top, this is far more forgivable in a film of this age. Filmmakers were still figuring out how to tell stories with sound, so I’m happy to give Bad Girl a lot more license in this respect than I would a film from more recent year.

Despite the plot that is transparently silly in that respect, there’s a lot of Bad Girl to like. Both Dot and Eddie are completely likeable characters. There’s genuine desire to see them together and happy at the end of the film, and the plot does manage to keep up the tension in this respect until the last two or three minutes of its running time. The performances, particularly that of James Dunn, are decent, although Sally Eilers comes off as wooden in a number of places.

The thing I don’t understand is the title. Why call this Bad Girl? Dot isn’t a bad girl at all. It seems like this title was given to the film as a way to get people into the theater, and that’s dirty pool. I’m not sure what I’d end up calling this, but I expected this to be a prurient tale of crazy lust and a young woman who spent her nights drinking and dancing. That’s nowhere near the case. It’s more or less a bait and switch, and that’s just unconscionable.

Why to watch Bad Girl: It’s actually kind of sweet.
Why not to watch: The title makes absolutely no sense.