Film: A River Runs Through It
Format: Streaming video from NetFlix on laptop. 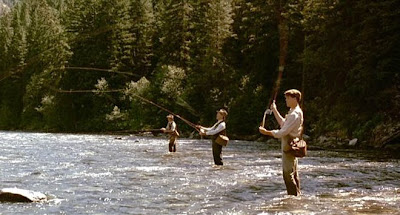 I have never understood the allure of fishing. I don’t like the taste of freshwater fish that much for starters, and it seems like such a waste of a day. I’d rather do almost anything else than sit in a boat or stand in a river like a goober hoping that a fish will be dumb enough to bite on a lure. A great deal of A River Runs Through It is spent watching people fly fish in rivers in Montana. I suspected as much going in, but figured since it was disappearing from Instant Watch, I should try to knock it out.

And I’m not kidding about the fly fishing. We’re told in the opening moments of the film that the father of our main characters was both a Presbyterian minister and a dedicated fly fisherman, and that in their house both fishing and church were considered sacraments. The father, Reverend Maclean (Tom Skerritt) runs a tight household filled with discipline and order. The two boys (played as youths by Joseph Gordon-Levitt and Vann Gravage) are home schooled, an education that consists almost exclusively of reading and writing with afternoons spent on their own, frequently fishing.

It’s not long before we start to learn something of the personalities of the two sons, especially as they get older. First son Norman (Craig Sheffer) is a dedicated student and much more careful and precise. It is he who gets accepted to Dartmouth and who discovers that he has a talent for teaching. Younger son Paul (Brad Pitt) is far more reckless and daring and much more willing to push himself and everyone else to the limit. Paul stays in Montana and gets a job as a journalist.

It is when Norman comes back home from college that we see just how far the two brothers have drifted apart in many ways. Where Norman sets his sights on Jessie Burns (Emily Lloyd) from a nearby town and pursues her with determination, Paul spends his time with a socially outcast native woman named Mabel (Nicole Burdette). It is Paul who drinks too much and who has developed both a gambling problem and serious gambling debts. It is also Paul who seems unworried by such things, willing to take life as it comes to him and deal with what happens on his own terms.

There isn’t a great deal of plot to A River Runs Through It. In many ways, this is a twin character study of the two boys, almost as equal but opposite reactions to their upbringing by a stern and orderly (but loving) father. Their mother (Brenda Blethyn), while present in many of the scenes, is almost a non-entity in the forming of the character of the two sons. In Norman, we have the son who has accepted these teachings and who understands the value of simple hard work and dedication to craft. Paul, rather than accepting these lessons, rebels against them.

That really is it. The events that happen throughout the movie more or less repeatedly demonstrate the difference between the two sons and their outlooks on life. If nothing else, the film is notable in this respect that we do not deal with an overly harsh or brutal father. This is a man who is set in his ways and who believes with all he can that he has found the right way to live, but he is surprisingly non-judgmental of his sons and it’s clear throughout that he loves them both and takes great pride in them. Often with a film like this, the father is something of a tyrant, something to be battled against. Here, we have at worst a benevolent dictatorship, and even that’s pushing it. I found that refreshing.

The other notable thing here is the cinematography, which is pretty spectacular. This is a gorgeous film, there’s no denying. I certainly haven’t seen everything from 1992, but it didn’t surprise me a bit to learn that the one Oscar this film won was for its cinematography.

There’s a lot to like with this film, laconic and dreamy as it is. It’s not a film I’ll feel the need to watch a second time any time soon, but I can certainly understand its appeal. There is a timeless quality to it, a quality that is very much enhanced by Robert Redford’s measured narration (as a much older Norman) through many of the scenes.

Now, if I gave a whit for fishing, I’d probably love it.

Why to watch A River Runs Through It: It really is pretty to look at.
Why not to watch: All fly fishing all the time.

Email ThisBlogThis!Share to TwitterShare to FacebookShare to Pinterest
Labels: A River Runs Through It, Best Adapted Screenplay, drama, Robert Redford