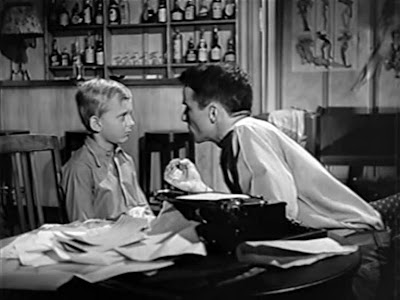 I’ve never been shy about my general dislike of Montgomery Clift. I suppose that “dislike” is too strong a word. He’s just rarely done much for me; he’s one of those actors who tend to make me think that the person doing the casting should have looked a little harder. That’s a position I’m going to revise slightly with The Search, because I think this is the best thing I’ve seen Clift do, and there are a couple of his performances (Judgment at Nuremburg, The Heiress) that I like pretty well.

The Search is a heavier topic than I was expecting. The first part of the film is concerned with, more or less, a primer on the Holocaust. The film is squeamish enough or politically correct enough that it doesn’t go into much detail here. Instead, it focuses more on the low-hanging fruit of children who were affected. We are shown a happy Czech family only to discover that they were eventually captured by the Nazis, separated, and tossed into concentration camps. The father and daughter, we learn, were killed. The mother, Mrs. Malik (Jarmila Novotna), survives the war and is hopeful that her young son Karel (Ivan Jandl) may have survived. She dedicates herself to finding out the fate of her boy.

Meanwhile, we also learn about Karel, who survives Auschwitz. He is rounded up with other children and taken to the UN Relief and Rehabilitation Administration. The children, having essentially grown up under Nazi occupation and discovering that particular evil first hand, are naturally not ready to accept that their new “captors” are anything different from the regime they’ve lived under. A group of the children attempt to escape, Karel among them. He and a companion flee to a river; Karel gets away but the friend is drowned.

Karel lives on his own, eventually encountering Ralph “Steve” Stevenson (Montgomery Clift), who brings the boy in and takes care of him. After some initial problems, the boy begins to trust his new protectors, but not enough to talk. Steve, needing to call him something, decides to call the boy Jim and also begins teaching him English. Steve’s tour in Europe is nearly up, and he decides that he wants to take care of Jim, and the best way to do that is to bring him back to the States with him. He starts putting those plans in motion, eventually realizing that the red tape is too thick to get him home right away, but he does as much as he can to bring Jim with him. This quest is enhanced by Steve’s belief that Jim’s mother was gassed in one of the camps.

As for Jim/Karel’s mother, she learns wrongly that Karel drowned with his friend during his escape attempt. To bring her back into the world, she beings working with the children at UNRRA, preparing them to be sent to the new Palestine.

There’s a lot to like in The Search. As much as I’d like to say Montgomery Clift is the best part of this film, he’s only one of the great parts of it. The real best part of the film is the performance of young Ivan Jandl. It would be very easy for this kid to be maudlin and annoying, but he’s really not. He’s easy to feel sympathy for throughout the film, and gives a truly fantastic performance. Every moment is believable with him.

I like Clift here, too, mainly because he’s also very sympathetic as a character. Steve is a nice guy, one who is easy to root for. And until the very end, with the near misses and near meetings between Karel and his mother, we’re happy to think that Jim will go home with Steve, who will be a great dad. He’s supported by a solid performance from Wendell Corey as Steve’s superior officer Jerry Fisher.

I’m mildly surprised at the lack of any nomination for Jarmila Novotna, save the fact that the Academy wasn’t particularly excited to give nominations to non-American or British actors in general at the time of this film. Novotna is good here, and again, perfectly sympathetic as a character and believable. She is aided by a good performance from Aline MacMahon as the woman running the UNRRA camp. MacMahon is great—she’s tough and by the book, but also caring and quick with a shoulder to cry on when it’s needed. She comes off as hard at first, but once we see her, we learn that the tough exterior is probably there to keep her psyche safe in dealing with these damaged kids. Beneath that veneer is a woman who cares deeply about what is going on around her.

All of these performances are important, because that’s really all we’re given here. The plot is straightforward and uncomplicated, so the only way to keep the interest of the audience is to give us characters that actually mean something to us. And so, all of them do. There are some wonderful moments. After his initial rescue of Karel, Steve figures out that the boy is a concentration camp survivor, and thus the boy’s lack of trust is suddenly understandable. Through pantomime, he demonstrates that the boy is free to go, and so he does, running through the house and the front gate and out into the street. And he stops and looks back, seeing that Steve and Jerry are not chasing after him, and so realizes that he’s no longer a prisoner. It’s a wonderful moment beautifully realized. There are a few of those moments here, and they make the film worth the time.

My only issue, and it’s a completely forgivable one, is with the ending. We know we’re going to get the Hollywood ending with this film, or are at least confident enough that the ending isn’t much in doubt. I’m fine with that. I just think it ends too soon. A two minute epilogue would cap this film perfectly, and that’s not too much to ask.

Why to watch The Search: It feels like a real story.
Why not to watch: It’s pretty Hollywood-y at the end.