Film: The Contender
Format: Streaming video from NetFlix on The Nook. 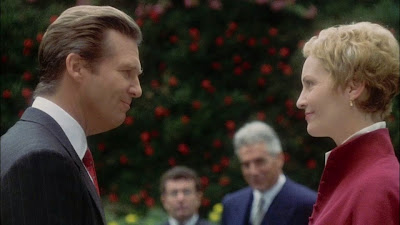 On days when the weather is bad and I have to go to work, I tend to drive west on Highway 38 until I hit the town of Rochelle, IL. Rochelle is a town of about 10,000 people, a pretty standard Midwestern town in a lot of ways. It also happens to be the home town of Joan Allen, who I almost always enjoy in films. Joan Allen and I share an alma mater, too. This and a couple of dollars will get me a cheeseburger somewhere. Still, there are times when I wonder if my appreciation of Joan Allen is at all because of the fact that I could get to her childhood home in less than 20 minutes. And then I see a film like The Contender and realize that I like Joan Allen in front of the camera because Joan Allen is damn good in front of the camera.

< The Contender is a political thriller, a film of high power, intrigue, and politics at the highest level. What that means more or less is that this film is going to get lurid quickly and stay lurid for most of its running time. That means sex, double standards, glass ceilings, criminal accusations, and plots and plans within plans. This is a surprisingly gripping film for having what is essentially an incredibly simple plot.

Things start with a bang. Governor of Virginia Jack Hathaway (William Petersen) is fishing when a car drives off the side of a bridge and plunges into the river just past the boat. Hathaway jumps in to rescue the driver, but fails. Why does this matter? Because the Vice President has recently died and sitting president Jackson Evans (Jeff Bridges) is looking for someone to fill the post until the end of his term. Despite his heroics, though, he is not named as the potential appointee, and is unceremoniously dumped by Evans’s Chief of Staff Kermit Newman (Sam Elliott).

Instead, Jackson Evans has decided to leave himself a legacy by naming the first female vice president in American history. Ohio Senator Laine Billings Hanson (Joan Allen) is given the nod, which means a series of confirmation hearings. These hearings will be headed by one of President Evans’s main rivals, Illinois Representative Sheldon Runyon (Gary Oldman). Runyon was a supporter of Governor Hathaway and essentially decides that rather than work to appoint Senator Hanson, he’s instead going to do everything he can to block the nomination. Assisting him is young Delaware Representative Reginald Webster (Christian Slater), who is looking for a way to get further into the halls of power.

And that means that we’re going right for the dirty stuff. Right away, Senator Hanson is accused of being a participant in a group sex act during her college days; there are pictures and everything. She’s accused of having received money for this, making her potentially guilty of prostitution. She’s also implicated in having an affair with her campaign manager (Robin Thomas Grossman). Through it all, Hanson refuses to answer questions regarding these issues, essentially stating that to answer them is to agree that the questions were valid in the first place.

This is very much a film with its feminist credentials on display. The entire point of the film is not whether or not Senator Hanson had a lurid past or engaged in what many would consider deviant sexual acts. No, this is about the stand that she takes. A huge portion of the film more or less comes down to the idea that were she a man, she wouldn’t be asked these questions, and the if the questions were true, no one would care. It’s very much about the double standard that exists in the political realm and in the rest of society as well.

And unfortunately, I was with the film all the way up to the end. In the last fifteen minutes or so, the film completely boots the ending. In addition to giving us an incomplete resolution, the film veers off into territory that makes pie-in-the-sky look normal and rational. We’re ultimately presented with something that simply does not mesh with reality in any way. It’s an idealized version of the political process that wouldn’t have looked out of place in a film like Mr. Smith Goes to Washington.

It’s a shame, because the film really is pretty compelling up to that point. I had completely bought into the idea of the scandal and the unfair treatment of a female senator all the way to the midpoint of the third act. I really wanted to like this film all the way through, and ultimately, it so thoroughly shits the bed at the finish that I came away disappointed.

The performances are solid, too. Joan Allen is as good as she’s ever been. Jeff Bridges got a Supporting Actor nod for this, and I’m mildly surprised, because Gary Oldman deserved it much more. But all the great performances in the world can’t save a film that punks out in the final stretch, and sadly, that’s exactly what happens with The Contender.

Why to watch The Contender: Solid political/courtroom drama and Joan Allen at her best.
Why not to watch: It punts the ending.