Lend Me Your Ear

Film: Lust for Life
Format: DVD from NetFlix on laptop. 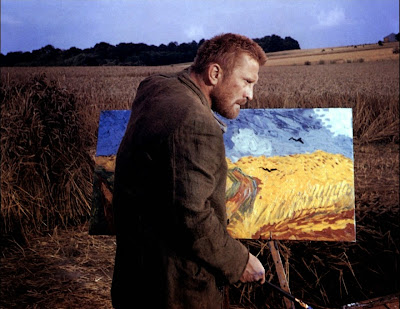 A number of years ago we took a family trip to Paris. In addition to my wife and me, my father and his wife, one of my brothers and his wife, both of my sisters and one of my sister’s husband were there. Spend a little time in Paris and you can’t avoid going to a few art museums. It’s sort of what you do. While my preferences tilt more toward the Louvre, pretty much everyone in my family peed themselves a little over the Musee D’Orsay. That’s the impressionist museum, filled to the brim with Degas, Manet, Monet, and of course Van Gogh. I say this to point out the fact that I didn’t pee a little over the D’Orsay. The impressionist school doesn’t do a lot for me. This is important because Lust for Life might well be called “The Vincent Van Gogh Story.” As a side note, if you’ve seen the movie Hugo, you’ve seen the D’Orsay. It’s housed in the old Paris train station used at the heart of that film.

We should clear up the pronunciation of the name, too. If you’re an American, you almost certainly pronounce the painter’s last name as “Van Go.” It’s pronounced myriad ways in the film, though—Van Goff, Van Guff, Van Go, Van Gog, Van Gah. Pick the one you like; I’m not going to care how you say it. The actual Dutch pronunciation is evidently Van Gokh, with the final sound being akin to hacking up phlegm. But I digress.

So we learn a bit of the history of Vincent Van However You Say It (Kirk Douglas) including his failed attempt at a career in the clergy. Through all of his missteps into different careers, he draws, wanting to capture on paper what he sees in his head. He is sometimes supported financially by his brother Theo (James Donald), who also acts as our narrator, reading letters he receives from Vincent. Vincent is also unlucky in love, being spurned by a widowed cousin (Madge Kennedy) before turning seriously to his art.

Of course, the story of Van Gogh’s art career is that he was a complete failure until after he was dead. The film tries to give us some of this, showing his progression as an artist at various stages of his career as well as showing us the progression of his mental and emotional decline. Following his shameful dismissal from his cousin, he takes up with a prostitute (Pamela Brown), who eventually leaves him because he is too poor to support her and her child. Eventually, Vincent makes friends with fellow painter Paul Gauguin (Anthony Quinn). The two share a love of their art, but also argue endlessly, eventually leading to Gauguin leaving and Vincent cutting off a part of his ear—a significant change from the legend that he did it for a woman who had rejected him.

Eventually, the movie ends, and there’s really only one way it can end. There’s some question as to the circumstances of Van Gogh’s death. He may have committed suicide or he may have been murdered. It’s also possible that he was shot accidentally. The film takes a particular view of this event, but your mileage may vary concerning the historical accuracy.

There are a few things to recommend the film. Anthony Quinn won the Best Supporting Actor Oscar for his role as Gauguin. He’s actually not in the film that much, but he casts a long shadow over the part he is in it. It’s almost as if Gauguin, through Quinn’s performance or simple force of personality becomes the main character for that section. It’s hard not to watch him when he’s on screen here regardless of Kirk Douglas’s various histrionics in the main role. Quinn is not measured, either, but gives his own manic but believable performance of a slightly mad and rambling genius.

It’s hard not to be impressed by Kirk Douglas here, but it’s also easy to see just how close to the line he walks. Douglas’s Van Gogh is a baby step away from being a Romantic-era poet. He doesn’t experience emotions by the half, but gets all of the feels all of the time and in every way possible. Douglas manages to keep the whole thing just barely in the realm of the real, but a step our two outside of where he takes this and we’re not just into melodrama, but puppet show. I almost expected him to occasionally scream, “You just don’t understand!” like a high school girl and run off to his room, slamming the door and writing in his journal about the mean painters at painter school.

The final selling point here is the artwork itself. This film is art directed within an inch of its life. Van Gogh’s artwork is placed everywhere here, often just leaning against a wall or sitting on a chair. Tons of the works are easily recognizable, even for someone who doesn’t know much about art. We’re also regularly treated to close-ups of various paintings as if the film had suddenly become a documentary.

Lust for Life isn’t bad; it’s just not that great. It’s a good portrait of the man, but if you don’t care that much, this film isn’t going to make you care at all.

Why to watch Lust for Life: A great display of Van Gogh’s artwork.
Why not to watch: It’s overwrought throughout.