What Does the Fox Say?

Film: The Little Foxes
Format: Video from The Magic Flashdrive on laptop. 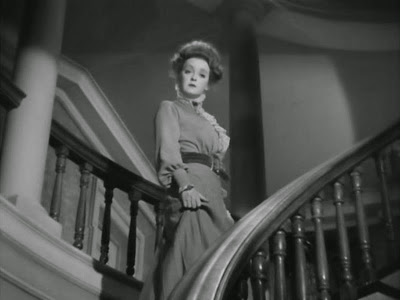 Before I started watching movies critically, I couldn’t call myself a Bette Davis fan. That was mostly from unfamiliarity rather than from any specific dislike. Watching the 1001 Movies list turned me into a Bette Davis fan to the point when I see that she’s in something, I tend to look at that film with a certain level of anticipation. I’ve had a copy of The Little Foxes sitting on my hard drive for a couple of years but have finally gotten around to it tonight. Bette Davis does not disappoint.

The Little Foxes is a film that, at least for 1941, pulls no punches in its brutality, and a large portion of this comes directly from Bette Davis herself. Davis could play a sympathetic character when the role called for it, but she was always better as a the height of manipulative evil. In The Little Foxes, she’s joined by other characters just as nasty and conniving as she is, all of these characters coming from the same wealthy, vile family.

The Hubbard family are the wealthy elite in a Southern town a few decades after the Civil War. There are three adult Hubbards: Ben (Charles Dingle), who seems to be the one who is the most in charge of things; Oscar (Carl Benton Reid), who has married the drunken and silly Birdie (Patricia Collinge) as a way to get access to her family’s land; and Regina (Bette Davis), who married poorly in a society where inheritance comes only through the male line. Regina has been left out in the cold in terms of the family wealth and her wealthy brothers are too greedy do anything to help her. Regina depends entire on her husband Horace Giddens (Herbert Marshall), who is sickly and suffering from a serious heart condition.

Ben and Oscar have a new plan to make even more money. The idea is to start a new business, a cotton mill in town so that the cotton they grow on Oscar’s and Birdie’s land can be processed by them at a much lower cost. The plan requires Horace’s money too, though, specifically in the form of $75,000 in negotiable bonds. This is money that he refuses to give up, knowing that with their business, Ben and Oscar will underpay their workers and further bleed the area of money to put in their own pockets. So how to get the bonds? Steal them, naturally. This action comes from Leo Hubbard (Dan Duryea), the son of Oscar and Birdie. Leo works at the bank owned by Horace and knows where Horace keeps the bonds. He takes them so that the deal can go through, but Horace discovers the missing bonds, which gives Regina the opportunity to blackmail her brothers.

There’s a subplot here about Leo and Alexandra (Teresa Wright), the daughter of Regina and Horace. Oscar is convinced that the best way to keep the money in the family is to have Alexandra and Leo marry each other despite their being first cousins. This is a plan that disturbs everyone but Oscar and Leo; for her part, Alexandra is much more interested in David Hewitt (Richard Carlson), a local newspaper reporter.

The entire point of The Little Foxes is the plots within plots of this terrible family. Each of the three siblings hates everything in the world but their own person, money, and the idea of destroying other people, including each other. And as the film builds to its climax, the truth of the old adage of being careful of getting everything you want plays out with not a small amount of pleasure for the audience.

Davis was nominated for this performance, and well she should have been. She always played the vicious ice queen beautifully, and she does so here with a certain amount of relish. There were also nominations for Patricia Collinge and Teresa Wright. Wright’s performance is one I can take or leave. She plays the daughter of her father rather than of her mother, but aside from her self-righteousness, there’s nothing too exciting there. Collinge, on the other hand, is both pathetic and brilliant; Birdie is a woman who knows exactly what she is and why she is that way, and it’s wonderful to see that realization from her.

But I’m most impressed with the work of William Wyler here. There is some marvelous use of camera here, where important events are shown in the background out of focus so we can instead focus on the reactions of the characters in the foreground. Wyler shows us exactly what he wants us to see, and it’s his direction that makes the film work as well as it does beyond the basic performances.

I’d love more of a resolution to the film. The ending, after all of the backstabbing and anger and plots, fades away without giving us a good, solid punch. We spend so much time in the company of these hateful people that it almost feels like they get off too lightly by the end.

But no matter. This is a solid film and one worth seeing, provided you can track it down.

Why to watch The Little Foxes: Bette Davis at her bitchy best.
Why not to watch: The resolution doesn’t go far enough.

Posted by SJHoneywell at 7:22 PM