Off Script: Invasion of the Body Snatchers (1978)

Film: Invasion of the Body Snatchers (1978)
Format: DVD from personal collection on laptop. 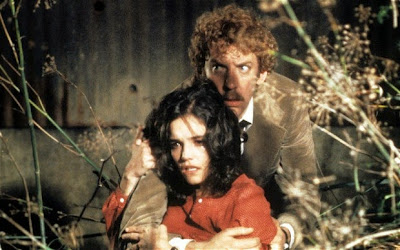 Once I heard that Leonard Nimoy died yesterday, I pretty much knew that I’d be watching the 1978 version of Invasion of the Body Snatchers. I’m a big evangelist for the original version from the 1950s, but I have avoided this first remake for one main reason. I’d heard that it was good from a lot of people but I was worried that it wouldn’t compare with the first version. I hoped it would, but there was a part of me that very much feared being disappointed. This was especially true because the 1993 version (Body Snatchers) and the 2007 version (The Invasion) were not widely regarded as being worth watching.

My fears were unfounded. This is a very good movie, and a very good version of the basic story. This is also one of those rare instances where I have read the source material. I find it very interesting that in both the original film and in this first remake, the filmmakers have opted for a much more downbeat ending than the book on which the story is based. There are a number of differences here from the original story and original screen version, but this is smart enough to hit the same emotional beats and the same plot points and important moments.

The basic story is that one fine day, a new, strange plant begins blooming in and around San Francisco. What the people of San Francisco don’t know is that these plants, which eventually grow into gigantic pods, are from outer space. Place a pod next to a sleeping person, and the pod duplicates that person to the smallest detail, even taking over that person’s memories, albeit without any emotion. When the transformation is complete, the original human person basically crumbles to dust and the duplicate takes over with the goal of converting more people to the literal new world order.

Our heroes here are Matthew Bennell (Donald Sutherland) and Elizabeth Driscoll (Brooke Adams), both of whom work for the health department. Elizabeth brings home one of the strange flowers and soon notices that her boyfriend Geoffrey (Art Hindle) is not acting like himself. Concerned, she tells Matthew about this, who suggests that she talk to his friend, Dr. David Kibner (Leonard Nimoy), a pop psychologist with a new book out. Kibner believes that Elizabeth is merely looking for a way out of the relationship she is in with Geoffrey, although he also admits that he’s been getting a lot of the same complaint from people—that their loved ones are somehow changed and different.

And, well, of course they’re different. When another of Matthew’s friends, Jack Bellicec (Jeff Goldblum) has something that looks like a body turn up at his place of business, things really start moving. His wife Nancy (Veronica Cartwright) is convinced that the body they found was turning into Jack, which it naturally was. As the quartet begins to piece together the truth, they also discover a web tightening around them as more and more of the San Francisco population is taken over by the alien pods.

Both the original film version and this update are very carefully made to induce not terror or panic, but a lasting sense of paranoia. The scares here come purely from the tension created by the situation and by what happens both to and around the characters. Invasion of the Body Snatchers is a slow burn for the first half hour or so, but once the actual invasion starts and there are people we know to be hatched from pods, it never really lets up until the deservedly famous climax.

There are a couple of nice homages to the original film as well. Kevin McCarthy, who starred in the 1956 version, makes an appearance as a crazed man screaming, as he does in the original, “You’re next!” Additionally, the original film’s director, Don Siegel, shows up as a taxi driver as the film moves into the third act. Not an homage, but an interesting bit of trivia—the priest on the swings in the film’s opening is an uncredited Robert Duvall.

The question is whether this is more of a science fiction film or more of a horror film. I lean more toward the former. There are absolutely horror elements here, but it’s also very much an alien invasion film. Again, it’s not so much that this film is scary as it is paranoia inducing. No one watches this movie and then doesn’t look closely at his or her close relatives and friends carefully for the next couple of days.

Invasion of the Body Snatchers works almost in spite of itself. It is an admittedly goofy premise, but the film is successful by taking that goofy premise completely seriously. As the two later versions attest, it’s an easy premise to do badly.

There are a few points in the film that I think spoil some of the shocks that happen in the second and third act, but these moments are minor quibbles in a film that is this well made from start to finish. The performances all work here, as do most of the special effects. I think I like the original a little bit more than this version, but it’s a close race, and this is one I’ll watch again.

Why to watch Invasion of the Body Snatchers: Few films can inspire this level of paranoia.
Why not to watch: It’s too scary for you.