Film: The Messenger
Format: Streaming video from Hoopla Digital on The Nook. 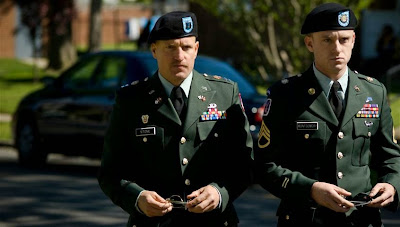 Sometimes, you just know you’re signing yourself up for a movie that’s going to make you want to sit in a dark room for a couple of hours. I knew The Messenger would at least be that in part. When your main character is a military veteran assigned to tell people about the death of a loved one in combat, there are going to be scenes that are ugly and painful and filled with the kind of thing that makes you wonder why the hell wars happen in the first place. For all that, The Messenger is not really an anti-war film, although there are certainly elements of that.

Staff Sergeant Will Montgomery (Ben Foster) has been wounded in Iraq and, having seen enough combat time, has been returned to the United States with a few months left on his tour. Rather than send him back into combat, he is given duties stateside including being assigned as a casualty notification officer. His job is, whenever called, to inform the next of kin of a soldier slain in the line of duty. He is specifically assigned to work with Captain Tony Stone (Woody Harrelson), a recovering alcoholic who has been working in casualty notification for too long.

Stone is a stickler for the rules of the job. There is a procedure to the way the notifications are handled and it is his duty, in his mind, to follow those rules to the letter in notifying people of a loved one’s death. He stresses this in the first meeting with Will, noting particularly that physical contact between the personnel and the “NOK” (next-of-kin) is strictly prohibited. In fact, the entire reason for their job is to make sure that the notification comes from the military and not from CNN or in some other way. Notification must happen within 24 hours, and the preferred time is within four, meaning that Will is essentially on call from early morning until late evening and must be ready to head to someone’s house at a moment’s notice.

This is naturally not all that Will Montgomery is dealing with. For one thing, despite being decorated for saving members of his team in combat, Will is suffering from a certain amount of survivor’s guilt, the reasons for which come out near the end of the film. He is also slowly coming to the realization that his long-time girlfriend Kelly (Jena Malone) has moved on from him while he was in Iraq and is marrying someone else.

A great deal of the middle section of the film concerns Will’s sudden fascination with Olivia Pitterson (Samantha Morton), a woman whom he informs of the death of her husband. He is initially struck by her reaction, which is almost disturbingly calm and respectful. He finds himself drawn to her, seeing her again in a mall confronting a pair of soldiers attempting to recruit two kids to join the military. Will ends up giving her a ride home and soon realizes that despite the regulations against becoming involved with someone he has notified, that this is a woman he is attracted to, and the feeling is evidently mutual.

The Messenger is far too smart a film to get bogged down with this as the plot, though. Will’s and Olivia’s relationship remains tentative through most of the film, not because of the rules against it but because both of them are broken in certain ways and both of them are smart enough to realize that they are both broken. The attraction is there, but so too is the knowledge that this might well lead them both into a relationship that is there to quell the pain rather than for anything positive.

Instead, the film focuses much more on the attempt of Will to assimilate back into society and to deal with the terrible job that he now has on behalf of the Army. We see a series of notifications, all of which are terrible in their own way, all of them painful, and each one unique in its awfulness. We live through these with him—again, the film is smart enough to avoid putting music over these scenes and avoids giving us unnecessary jingoism. The reactions of the families are real and awful, and include Will being spat upon by one distraught father (played by Steve Buscemi).

The smartest thing about this film, though, is that the politics of it are non-existent. I can’t really tell you what writer/director Oren Moverman thinks about war other than the fact that it’s a tragedy when people are killed. This is very much a film not about war but about the aftermath of war and the human cost. Moverman is careful throughout to make the characters human instead of walking patriots. Both Will and Captain Stone are real people. So too is Samantha Morton, who looks very much like a real person here. There’s no glamor in the film at all. People are just people.

This is not a film that anyone really likes. It’s an easy film to respect, though, just as the film itself is respectful of its subject. I don’t want to watch it again despite excellent performances throughout, particularly from Ben Foster and Woody Harrelson (who was nominated for Best Supporting Actor). I don’t want to watch it again, but I’m glad I watched it once.

Why to watch The Messenger: Sobering performances from Foster and Harrelson.
Why not to watch: It’s the definition of a hard watch.