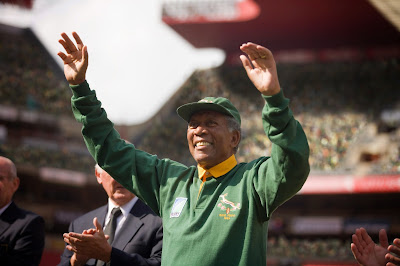 Someone needs to talk to marketing people. There are times when you can be assured that most of a film’s audience knows the history and there are times when the film audience doesn’t. In the case of Invictus, which follows both Nelson Mandela’s early days as President of South Africa and the 1995 Rugby World Cup, it’s much more the latter than the former. I’m sure there are plenty of people who know all about rugby, but the bulk of an American audience views the game with the same quizzical expression we do Australian rules football and cricket. So putting a picture of Matt Damon on the front of the DVD case holding up the trophy? That kind of spoils the ending.

Anyway, that really is what Invictus is about. Mandela (Morgan Freeman) is released from prison and shortly thereafter, with black South Africans given the right to vote, elected to the presidency of the nation. Naturally, this is a tense situation, since organized and authorized racism had been the law of the land for so long. Mandela seeks to change all of that, first be assuring the white staff members of his government office that they are welcome to stay at their posts. This is further reinforced when, needing additional security, he brings in a team of white, military trained personnel who a few years before had been trained to repress more than half of the population. None of this sits well with his head of security, Jason Tshabalala (Tony Kgoroge).

Meanwhile, the South African rugby team, the Sprinboks, are going through something of a malaise. Their team captain, Francois Pienaar (Matt Damon) is starting to feel pressure and assumes that he will be released from his captaincy. The national relationship with the Springboks is a unique one. For the white Afrikaners, the team represents everything about the old South Africa. For the black South Africans, the same is true; most have a policy of rooting for anyone playing against the ‘Boks (or Bokke in Afrikaans). The now mostly-black South African Sports Committee votes unanimously to change the team name a logo, a move eventually thwarted by Mandela. It is his belief that taking away this tradition will only alienate the Afrikaner population. His goal is instead to unite the country.

And so, little shock here, rugby becomes the vehicle of state unity. South Africa was named to host the Rugby World Cup in 1995, and Mandela believes that if the team can win, the country will unite behind them. It won’t solve all of the problems, of course, but it would be a start, and part of that is getting the black South Africans to become Springbok fans.

There aren’t a lot of surprises with Invictus. It’s a fine film and well made, but the emotional beats are very easy to see coming from a mile away. Mandela’s security team, for instance, starts out with a great deal of distrust and slowly comes to learn to respect and even like each other. At the start, things are quite literally black and white, and by the end, members of the security detail are sharing rides with each other and acting as friends. The same is shown to be true of the country as a whole.

Sure, some of this certainly happened. South Africa really did win the 1995 Rugby World Cup, and almost certainly there was celebration in the streets. It’s unfortunate when a story like this happens that it feels almost as if it was written for the screen instead of being the story of what actually happened. The film can’t help it that this is reality. But it can help hitting all of those emotional points at exactly the moments it does. It can also help feeling as scripted as it does all the way through.

Invictus isn’t a bad film by any stretch. It’s just a very predictable one. If someone was going to write this story cold, knowing none of the actual history, this is pretty much how it would be written, and so I almost have to think that some of those emotional moments were placed here specifically as emotional moments.

Additionally, far be it from me to question the wisdom of nominating Morgan Freeman for anything ever, but I kind of do question his nomination here. Sure, it’s a very good performance. It’s Morgan Freeman, after all and he rarely disappoints. It feels like he was nominated not specifically for his warts-removed depiction of Mandela, though. It feels very much like he got the nomination based in large part on the fact that he was playing Nelson Mandela.

As for the rugby itself, I can’t speak to it. I don’t understand the game. I assume it’s accurate, and I guess that’s good enough.

Why to watch Invictus: It’s inspirational in spite of itself.
Why not to watch: The cover of the box spoils the ending.