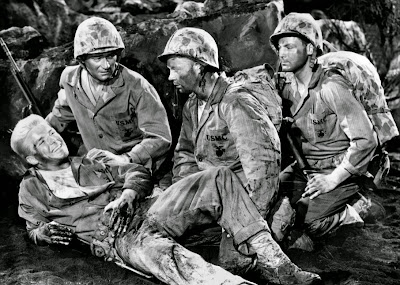 There’s something unique about American war movies made in the years during and just after World War II. It’s not terribly surprising that the films of this era are patriotic to put it mildly. In truth, a lot of them are pretty jingoistic, and Sands of Iwo Jima leans this way. We are at least spared the indignity of watching hordes of non-Americans pretend that they want to be Americans, though, since we’re dealing strictly with the battlefield here, and strictly with the island hopping campaign in the Pacific.

A new group of marines is assigned to Sergeant John M. Stryker (John Wayne), a notorious hardass. Stryker spends the first portion of the film running his troops through a massive amount of training and beating them down heavily. All of the men object to this naturally, but two are particularly vocal in their objections. The first of these is Pfc Peter Conway (John Agar) who is in the unfortunate position of being the son of one of Stryker’s former commanders. Worse for Conway is that Stryker was a huge admirer of Conway’s late father, and in fact named his own son after the man. Conway wants to be nothing like his father and enlisted more out of a sense of tradition than anything else, knowing that this attitude will make him a constant disappointment to Stryker.

The second fly in Stryker’s ointment is Pfc Al Thomas (Forrest Tucker), who has lived under Stryker’s reign for a long time. Thomas feels that he has been specifically passed over for promotion because of Stryker’s influence. He’s also been busted by Stryker in the past, so there is no love lost between them.

A story that takes some precedence in the early going is the sudden romance between Peter Conway and Allison Bromley (Adele Mara), a girl working in a dance hall for the troops. Eventually the pair are married, much to the chagrin of Stryker, who thinks that getting married during wartime is a massive mistake when anyone could die at any time.

The troops eventually are sent off to take Tarawa, where the marines battle their way across the island. The big event here is what happens with Al Thomas. During the battle, he is pinned down with a pair of squadmates when all three are pinned down without ammunition. Thomas runs off for more ammo, but discovers an area at the back where men are relaxing and drinking coffee. He stops for a few cups of coffee, completely forgetting about the men that he ran away from. The two are overrun; one is killed and the other seriously wounded. I’m guessing this will come up at the end, although away from the war, Stryker confronts Thomas about this and the two duke it out for a bit.

Eventually, true to the title of the film, the men are sent to Iwo Jima, and we naturally end with the famous flag raising, and patriotism reigns supreme.

So let’s talk about that moment when Al Thomas abandons his friends for a cup of coffee. This is the kind of thing that merits a court-martial and years in a military prison. This is dereliction of duty at the highest level, and guys get put away in the military for a hell of a lot less. For me, even in a film laden with war movie clichés, this is the moment where I throw up my hands and wonder what the hell the filmmakers were thinking.

John Wayne is the sell here, and he really is the main reason to see the film. Wayne was always at his best when wearing either cowboy boots or a helmet, and here is no different. It’s not much of a stretch to suggest that in Sands of Iwo Jima John Wayne basically plays John Wayne. But who else could do it better?

John Agar is surprisingly not an issue here. Agar made a career in terrible B movies, usually as a scientist or something similar. Calling Agar wooden as an actor is kind of an insult to wooden things. He’s not bad here, but there’s always a sense that he’s reading his lines off a cue card.

The bottom line is that this is a film that appears to have been made specifically to pat the Marine Corps on the back. It should come with a disclaimer that if you’re not for the troops, you’re against them.

Why to watch Sands of Iwo Jima: John Wayne being John Wayne.
Why not to watch: Jingoism.