Film: A Star is Born (1937)
Format: Streaming video from NetFlix on The Nook. 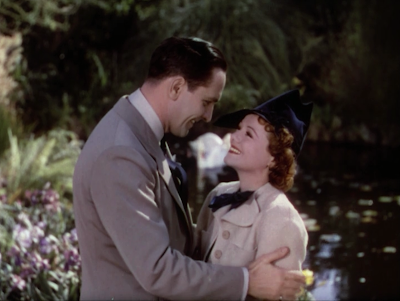 I’m always a little surprised when I dip down into the 1930s and find a film that was done in color. In this case, the 1937 version of A Star is Born surprised the hell out of me when the opening moments showed up in color. I wasn’t sure I really wanted to watch this tonight, but every now and then I need to get through something I’m not looking forward to. Most of the reason is that I’ve seen the first remake of this story. I liked the Judy Garland version of this well enough, but I tend to be leery of a story when I know precisely where it’s going.

Esther Victoria Blodgett (Janet Gaynor) is a North Dakota farm girl who has dreams of making it in the motion picture business. Her aunt and grandfather think here dreams are nothing but a waste of time, but her grandmother (May Robson) gives her all of her savings to head out to California to attempt to make her dream come true.

It’s slow going at first, and Esther quickly goes through the money she has. Nothing she does seems to work out and even Central Casting isn’t accepting new people as extras. She pals around with an assistant director named Danny McGuire (Andy Devine) who lives in the same boarding house and is also frequently out of work. Eventually, Danny lands a job on a picture and when the picture wraps, he manages to get Esther a job as a waitress at the wrap party.

It’s here that Esther grabs the attention of Norman Maine (Fredric March), a fading star with a serious drinking problem. Norman is immediately taken with the pretty and innocent Esther and arranges a screen test for her with his producer Oliver Niles (Adolphe Menjou). Soon after Esther signs a contract, and it’s not long after that that Esther has her first part, a one-line role. However, things change quickly in Hollywood. When Norman needs someone new in his picture, the role goes to Esther, who is suddenly renamed Vicki Lester and who becomes a major star.

And as happens in Hollywood, while Norman and Vicki fall in love and get married, their careers continue to go in opposite directions. Vicki becomes the rising star of the studio while Norman’s career continues to fall into decline. Before too long, Norman begins to slip back into his drinking despite his promise to Vicki that he’d give up drinking and become responsible. As his drinking continues and his career bottoms out, Norman becomes not merely a man who has lost his acting career, but a burden to Vicki’s.

As often happens with a film like this, my fears were mildly realized. I knew where this was going, of course, because I’ve seen the story before even if the version I have seen is the first remake. It’s difficult not to compare the stars of this one to the one with which I’m more familiar. For what it’s worth, both Janet Gaynor and Fredric March are excellent in this. However, they’re going up against Judy Garland and James Mason in the version from the 1950s. Hard to be better than those two, particularly Mason.

The story, of course, is one of the classic Hollywood romances. I like the fact that it’s a romance that tends toward the downbeat, since I evidently like my romances tragic instead of happy in general. It also concludes with one of the great lines in Hollywood history, so it’s got that going for it, too.

It’s entirely possible that had I seen this version of the film first, I’d like it more than its first remake. I didn’t, though, and so I don’t. I think it’s a solid film, and gun to my head I’d be hard-pressed to tell you why I like the remake a little bit more than this one. Well, the real reason is probably James Mason, who makes pretty much everything better all the time.

Still, this is one of those films that almost has to be watched for its place in history. While not a skewering of Hollywood, it’s a film that gives us an insider’s perspective on the business, and I love the bit toward the end of the second act where Vicki Lester gets an Oscar at the 8th Oscar ceremony (one that went to Bette Davis in real life). It’s a weird little moment in the film, since the award ceremony depicted is nothing like what happens today.

Anyway, A Star is Born holds up pretty well. I think you’re better served with the version from the mid-1950s, but you aren’t badly served by this original (well, except for What Price Hollywood? from a few years earlier).

Why to watch A Star is Born (1937): Janet Gaynor is great and Fredric March is as good as he ever is.
Why not to watch: You probably know the story even if this is the first version of it on screen under this name.