Film: The Croods
Format: Streaming video from NetFlix on The Nook. 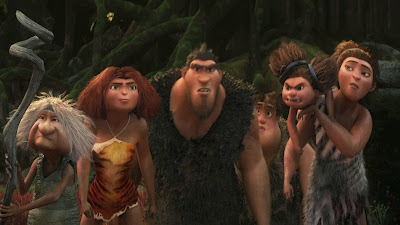 A lot of animated features take a great deal of liberty with how they depict reality, but few take as many liberties as The Croods. That’s not always a bad thing, but I do have to wonder why the creators of this film decided to take so much liberty with the reality of the animal kingdom. It seems completely unnecessary. I get the point of the modern references in a film about cavemen, but the flora and fauna of this world are like a human prehistory viewed through the lens of psilocybin mushrooms.

So we have the Croods, a family of cave people who live in an isolated spot that gets very little daylight since they are in the bottom of a narrow canyon. They are led by the father figure Grug (Nicolas Cage) and Ugga (Catherine Keener). Their children are oldest child Eep (Emma Stone), middle child Thunk (Clark Duke), and feral infant Sandy (Randy Thom). Also with the family is Ugga’s mother Gran (Cloris Leachman). Most of the family is scared of everything, coming out of the cave only to hunt for food for a few minutes a day before retreating to the safety and darkness of the cave. Eep, though, wants something more than just life in a cave and being scared of everything.

One night, she catches sight of something that attracts her attention and she goes exploring. This shiny thing that she found was the fire created by Guy (Ryan Reynolds), a wandering young man who, unlike Grug, uses his brain to solve problems instead of his muscles. Eep is immediately fascinated with Guy, who has warned her that the end of the world is coming and that her family needs to move. The end of the world (sort of ) does come in the form of an earthquake that forces the family from their cave and into a new tropical forest filled with any number of new creatures and dangers.

Slowly, the family with the exception of Grug start to warm to Guy and his inventions. Most of Grug’s thoughts end disastrously or are too concerned with safety while Guy is evidently capable of dealing with any potential dangers that threaten the family. It is Guy’s intent to follow the sun as far as he can, hoping to ride on it into a mythical world he calls “Tomorrow.”

To keep the family moving, the disaster that Guy has predicted follows them, forcing them to keep heading toward a distant mountain. And as you expect will happen, eventually Grug and Guy come to understand each other, Grug discovers what his true role as a father actually is, and eventually we end on a happy note like we expect to.

The Croods gets a few things right and a lot of things wrong. What it does right are the visuals and the underlying message of the film. For all its garish colors and weird hybrid animals, like piranha-mouthed birds, this is a pretty film to look at. The animation is excellent, and while there’s little mistaking it for a DreamWorks film, it does have a visual style that is very much its own. I like the message, too. Undergirding the film, more or less, is the idea that life needs to be lived, and too much safety and caution isn’t living but, as Eep puts it near the end of the film, just “not dying.” It’s also nice to have a strong, inquisitive, and smart female hero, which can be hard to find in animated films.

Pretty much everything else here strikes a sour note with me. The Croods dips back into the old animation well of making sure that any father character is essentially a hopeless dope who succeeds at anything he tries exclusively through luck. This is usually accompanied by a mother character who is smarter and more level-headed; The Croods goes a different way by giving us a mother character who is virtually non-existent in the film. This is a film where only very young children will not foresee the emotional beats several minutes in advance.

Additionally, almost all of the humor is physical. There are a couple of jokes involving Grug wishing his mother-in-law would die, but virtually everything else is physical comedy, and most of this feels like a straight homage to old Road Runner cartoons. Virtually all of the laughs come either from someone (usually Grug) being hurt in some elaborate but painful way. The lack of anything more subtle (a stretch in a film about cavepeople—I get it—but I can still dream) makes a lot of the comedy pretty one-note, and that’s disappointing, too.

And then there’s the wildlife. I have nothing against fanciful imagination, but why the need to create mice with elephant heads, for instance? Why do we need a multi-colored, multi-patterned cat creature as Grug’s foil and eventual pet? A sabre-tooted cat wouldn’t have worked just as well?

The biggest problem with The Croods isn’t that it’s a bad film; no, the biggest problem is that it just isn’t a very good one. It’s almost as if all of the money for this went to hiring actors and making it look pretty, so the filmmakers were left with a budget script containing corny jokes and a lot of old clichés. There was a way to make this film without it being so disappointing, but sadly our filmmakers didn’t find it.

Why to watch The Croods: The message isn’t a bad one.
Why not to watch: It gets to that message through a lot of clichés.