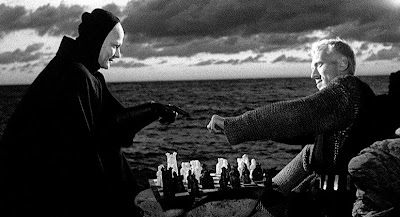 When you talk about great years for movies, 1957 should be one of the first ones you mention. In addition to having two of the greatest films of its decade, there are a bunch of films from this year that certainly could have been nominated and have held up over the past 65+ years. Right off the top, Paths of Glory is one of the great war films in history. It’s possible that Sweet Smell of Success hit a little too close to home for the Academy at the time. And while it’s a B-movie, The Incredible Shrinking Man is better than its genre. But it’s on the foreign front that 1957 really sings. What was released? Throne of Blood, Wild Strawberries, Nights of Cabiria, The Cranes are Flying, and The Seventh Seal, which didn’t even grab a nomination for Best Foreign Language Feature.

5: Sayonara has the unenviable fate of being very progressive in terms of race when it was made and very backwards in terms of modern sensibilities. Brando’s forced Southern accent is mostly consistent but also really annoying after half an hour, and this film is a lot longer than half an hour. It’s not a bad film, but it’s also no Paths of Glory or Sweet Smell of Success and it’s certainly no Throne of Blood or The Seventh Seal. While decent, it doesn’t deserve to be here.

4: Peyton Place suffers from some of the same problems as Sayonara. It goes further in a lot of ways than films of its time did in dealing with sex and scandal, but by today’s standards it’s so tame that it feels almost sanitized. It succeeds in everything it tries to do. It manages to not get confusing despite the large cast and it never really slows down despite its length. It’s an easy movie to appreciate, but in the crop of films that we’re offered for this year, it’s nowhere close to the best picture of the year, and given the chance, I’d nominate something else in its place.

3: Witness for the Prosecution is, for my money, the best of the also-rans in this group of five films. I’d nominate something else in its place, too, but this is a film I actually enjoyed quite a bit. If we limited the nominations to English-language films, it would make the cut for me, but it would be on the bottom behind Paths of Glory and Sweet Smell of Success. It loses points for its unrealistic ending, but it gains a lot of points for a great performance from Charles Laughton and a really fun one from Elsa Lanchester.

2: This is a year where I can easily make a case for two different films. I’m putting 12 Angry Men in second place because in the case of a tie, the tie goes to the Academy. The biggest issue with 12 Angry Men is that it’s really not very realistic at all. And with that said, no one watching this film gives a flying rat’s ass that it’s not realistic. This is a gripping drama perfectly cast and perfectly performed by the entire cast. Henry Fonda and Lee J. Cobb are the two most memorable, but there’s not a person out of place here, or a moment that doesn’t work perfectly. This is a film that is still well-known today for all the right reasons. 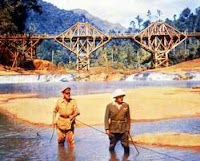 1: But for all that, I love The Bridge on the River Kwai like few other films. The first time I watched it, I thought it was too slow and I was also completely wrong. For me, the entire film turns on the performance of Alec Guinness, which is one of the greatest performances in film history. It works as a story about a man who realizes what his life has been. It also works as a hell of a good military adventure movie with Jack Hawkins and William Holden. As much as I may love 12 Angry Men, I can’t see taking away the award from Kwai. The Academy did right. 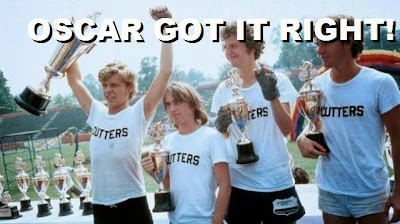 Posted by SJHoneywell at 1:27 PM

Email ThisBlogThis!Share to TwitterShare to FacebookShare to Pinterest
Labels: 12 Angry Men, 1957, Best Picture, Oscar Got It Right, Peyton Place, Sayonara, The Bridge on the River Kwai, Witness for the Prosecution