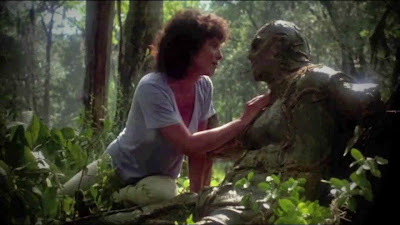 I know about Swamp Thing despite having never seen all of it. In its own way, it’s a legendary film. Its legend comes in no small part from its three main stars, Adrienne Barbeau and her chest. I knew enough to know this was based on a DC Comics character and shouldn’t be confused with the Marvel Comics equivalent Man-Thing, which technically came first by a couple of months. Swamp Thing got the movie, though, and Marvel’s giant plant/swamp critter only got to star in one of the most ridiculously named comics in history, Giant-Size Man-Thing #1.

What I didn’t know going in was that this was directed by Wes Craven, which potentially raises the bar. Potentially. In reality, the main reason to watch this is the Adrienne Barbeau’s co-stars under her shirt and the amazing potential for camp, all of which is exploited to the hilt.

What we have is a top-secret government installation located in an unnamed swamp. Let’s assume Louisiana. In the middle of this research facility is Dr. Alec Holland (the great Ray Wise) and his sister Linda (Nannette Brown) doing research on…something. Eventually we discover that Alec’s goal is to create a sort of hybrid between animals and plants, a plant with a will to survive like an animal. Alice Cable (Adrienne Barbeau) has been brought to the facility as a representative for the government. After a romantic walk with Alec in the swamp, the two are just on the start of a relationship when the formula that is precisely what Alec is looking for is discovered. Hooray!

But all is not well or safe in bayou country. No, the project has been plagued by the arrival of the evil Arcane (Louis Jourdan!). Arcane wants the formula for himself for…well…because he’s evil and stuff. He and his minions, who are led by all-around creepy actor guy David Hess, and pretty much kill off everyone. Linda gets shot in the back, Alice escapes, and Alec gets doused in his own formula and set on fire. He runs off into the swamp and is presumed dead.

But no, of course he’s not dead. Now he’s the Swamp Thing! He still has the brain of Alec Holland, but he’s got super strength and the body of a tree, but he can walk. Really it’s just Dick Durock in a rubber suit, and there are plenty of times when it’s painfully obvious that it’s a rubber suit. Alec does what he can to save Alice from Arcane’s goons. And, of course, there’s a big confrontation at the end between Alec/Swamp Thing and Arcane, who’s been infected with the formula, too.

There are some great moments of camp here, and a couple of places absolutely perfect for Mystery Science Theater-style riffing. Our nudity moment comes after Alice has encountered the Swamp Thing and realized who he is. Moments later, she’s bathing in a pool while the half-plant/half-man watches her. Had there been anyone watching with me, I wouldn’t have been able to resist a comment about Swamp Thing sporting wood at that moment.

In truth, before the film starts up, you know where it’s going to go. That’s the essence of a film like this. Technically, this is a horror film, but it’s really not a horror film. It’s a science fiction film with a decent amount of action, even if that action is remarkably fake in a number of places. The action parts are pure 1980s television; most of it wouldn’t look or feel out of place in a show like The A-Team. There’s even a Wilhelm Scream at one moment when a para-military goon in the employ of Arcane tossed out of a boat.

Swamp Thing isn’t meant to be taken seriously. Then again, there are some moments of pure awesomeness in it that make absolutely no sense. For instance, when Arcane takes the formula, he grows something like a cocoon made out of packing paper and comes out the other side something like a werewolf/Creature from the Black Lagoon hybrid. My favorite nonsensical bit comes in the scene the builds up to the climax. At one point, the Swamp Thing gets his left arm hacked off. When he’s later imprisoned, he reaches for light streaming into his cell, which gives him the immediate power to regenerate his lost limb. However, he was outside for a couple of days after his arm was cut off—outside in the sunlight—and nothing happened.

And then, at the end, the final confrontation happens, and it’s a fist fight? And the Arcane beast uses a sword?

Anyway, the film is livened up by one of Arcane’s minions doused with the formula (which brings out people’s true essence) and turns into a midget version of something from The Island of Dr. Moreau. There’s also a kid named Jude (Reggie Batts) who is one of the best things in the film. Reggie Batts didn’t have a film career after this movie, which is sort of sad, because he was a lot of fun.

Swamp Thing is dumb, but it’s fun dumb. That’s the best praise I can give it.

Why to watch Swamp Thing: Camp fun and an entertaining cast.
Why not to watch: It’s pretty dumb overall.