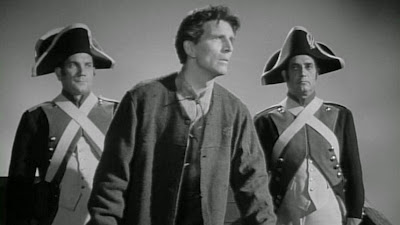 I’ve said for some time that my problem with the 2012 version of Les Miserables is that it’s a well-made version of a story that I don’t like that much. With me, though, there is always the danger that the reason I didn’t like this latest version is that it is a musical, and musicals are the genre I tend to be the hardest on. Tonight seemed a good chance to test this belief. The 1935 version of Les Miserables is essentially the same story (albeit a much shorter version) without all of the music and singing.

I’m not going to rehash the story here save the basics, but even the basics will take a few paragraphs. Jean Valjean (Fredric March) is arrested for stealing a loaf of bread. For this crime, he is sent away for 10 years, overseen by the dictatorial Inspector Javert (Charles Laughton). Upon his release, he is shown kindness by a priest, and eventually recreates himself as a captain of industry under a pseudonym. In so doing, though, he violates his parole, making Jean Valjean a wanted criminal.

In his new life, Valjean is famously generous and charitable. However, he leaves on particular decision to a subordinate, which causes the firing of Fantine (Florence Eldridge). Out of guilt, Valjean takes in her daughter, Cosette (Marilyn Knowlden as a child, Rochelle Hudson as an adult). But Javert is never too far behind, and Valjean and Cosette are forced to flee, changing identities once again.

Eventually, Javert catches up with Jean Valjean just as two key events happen. The first is that Cosette falls in love with Marius (John Beal). The second is that Marius and a number of other students are protesting against the government for better treatment of prisoners, a protest that eventually became the June Rebellion, which would be completely forgotten if not for this story. In the course of the story, all hell breaks loose, the students fight the police, Cosette and Marius try to find each other, and Javert continues to pursue Jean Valjean.

So, was I right? Yes. This is a pretty good production of the story, although it is considerably shorter and much more to the point than the versions I am used to. But I really don’t like the story that is on offer here. That is not to say that it’s a complete waste of time. Some aspects of this version are quite good.

The good can be pretty much summed up in two words: Charles Laughton. In 1935, Laughton had one of the great years for an actor in history. In addition to this film, he also did Mutiny on the Bounty and Ruggles of Red Gap. Inspector Javert is very much in line with his performance of Bligh, and that’s the performance we get here. Laughton plays Javert as a man obsessed not with right or justice, but with law itself, without remorse or pity and without conscience. It’s a solid performance, the kind that would often get a nomination in other years, save for the fact that the man was nominated instead for Mutiny on the Bounty.

Oh, I suppose there are some other positives. We don’t deal with the innkeepers at all once Cosette is rescued, and that’s a good thing. We don’t get a lot of the student protest, either. There are one or two scenes involving the rebellion including a pretty good battle sequence, but that’s pretty much it. I’m okay with that, since the film does away with the entire revolutionary aspect of the protest in the first place.

It surprises me to say this, but the biggest issue I have with this film is that even though I don’t like the actual story, this version feels like short shrift. It moves so quickly at times and leaves out so much that it feels more or less sanitized. Valjean doesn’t rescue Fantine from the streets—he simply takes her in a day or two after letting her go. Her sickness is therefore unexplained—it just happens. Even the ending is cut off, leaving us in a position that almost certainly negates the epilogue in the original story.

But there it is. I can say it officially now without a single reservation. I dislike the story of Les Miserables, so I’m going to dislike pretty much any version of it that I see, music or no music. I don’t care about the student rebellion, I don’t care about the romance between Cosette and Marius. I want simply to be done with them and not have to deal with Jean Valjean or Inspector Javert anymore.

Why to watch Les Miserables: Same story, no bellowing Russell Crowe.
Why not to watch: It’s the same damn story.