I Hear that Train a-Comin' 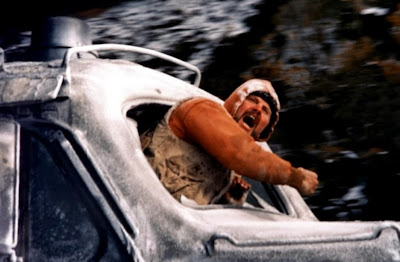 A couple of weeks ago when I discussed Best Director for 1985, I brought up the film Runaway Train and the work of Andrey Koncahlovskiy. Shortly thereafter, a couple of thoughts occurred to me. First was that it had been a number of years since the last time I had seen the film. Second is that Runaway Train is currently streaming on NetFlix. Third, and this was the deciding factor, is that this film is unavailable on disc from NetFlix, meaning that if it vanishes from streaming, I’d have a harder time finding it. Sometimes, the decision is really no more difficult than that.

As it happens, I remembered the bulk of Runaway Train pretty well. At least I remembered Both Jon Voight and Eric Roberts, who were nominated for Best Actor and Best Supporting Actor respectively. I remembered that it was a prison break film and that the Voight character and the prison warden had an enduring psychological battle. I forgot that Rebecca De Mornay was in this, but we’ll get to that soon enough.

Oscar “Manny” Manheim (Jon Voight) is imprisoned in Stonehaven Maximum Security Prison in Alaska. Unique in his situation is the fact that Warden Ranken (John P. Ryan) has welded Manheim into his cell, meaning that as the film begins Manheim has not left his little cubicle for three years. As the film begins, Manheim has won his case to be returned to the general population. Once out, he plans immediately to escape with his brother Jonah (Edward Bunker). Through a few misadventures, Jonah is wounded in something close to a riot and is unable to escape. Manheim does escape with the assistance of Buck McGeehy (Eric Roberts) a slow-witted boxer serving time for statutory rape. On a whim, Buck decides to escape with Manny and follows him out of the prison.

They make their way to a train yard and hop on the rearmost of four connected engines. A few moments later, the engineer on the train has a massive coronary and falls off the engine, propelling it down the track at an increased rate of speed. Due to a couple of mechanical issues, the automatic brakes on the train fail, suddenly sending these four engines hurtling out into the world with the two escaped convicts not knowing that they are on a train that is essentially doomed to eventually crash.

Much of the film is spent with the two men, who are eventually joined by Sara (Rebecca De Mornay), a railroad worker who happened to be on one of the engines when the engineer fell off and died. We do spend some time with the folks in the switching yard and control station for the trains as they attempt to solve the problem of the runaway without killing the people on board. And naturally, Warden Ranken will show up again for a final confrontation with Manny, because it’s not really an action film without a climactic showdown.

Runaway Train does a lot right and gets a few things not so right. The ultimate confrontation between Manny and Ranken starts out as silly in an action movie trope sort of way (Ranken enters the train via ladder suspended from a helicopter), but has a fantastic conclusion. I’ll call that a wash. No, the biggest issue here is the presence of Rebecca De Mornay, who serves only as someone who knows a little bit about trains and is there otherwise to be someone who gets in between Manny and Buck a couple of times and doesn’t do a lot else. She’s barely important to the plot, and aside from the few times when she actually does know something about the trains, she’s mostly unnecessary. The film is also saddled with one of the most 1980s soundtracks (at times) this side of Ladyhawke, which is a damn shame.

What it gets right, though, is not just the performances of Voight and Roberts, but the relationship between them. It’s immediately evident that Buck looks at Manny as a hero and in fact escapes with him for no other reason than to be close to him. A great deal of what Buck does and says are pure posturing in an attempt to impress Manny, and Roberts plays this well. It can be argued that Roberts overdoes the thick Southern accent and plays too much the shit-kickin’ hick, but I think it’s an honest performance and one of the better ones in Roberts’s career. Buck is dumb and there’s nothing particularly endearing or nice about him, but he’s pitiable, and it works.

This is Voight’s movie, though. Manny is a step above an animal as portrayed by Jon Voight, and not a full step. This is a man who, despite escaping from prison, is still a prisoner of all of his bad choices. There’s something slowly building in Manny through the film that wants to reclaim his lost humanity and to live as a man or at least have the chance to die as one on his own terms. Manny is scary, but also human underneath it all. Like Buck, there’s nothing particularly likable about him, but he is absolutely compelling.

But back to the original point I made at the start here. I mentioned Konchalovskiy as a potential candidate for Best Director. Do I stand by this after a rewatch? I do. I like the way this film plays out and I like Konchalovsky’s use of the camera. He does everything he can to make the train itself a character in the film and for the most part he succeeds. The train is naturally central to the narrative, but here it is more than just the thing that moves the plot. It is something in its own right to be contended with, and that’s a sign of good visual storytelling.

I may have liked this more on a first watch, but the ending we get is one of the great ones of its decade, and that cures a lot of ills.

Why to watch Runaway Train: Jon Voight about as good as he gets in a film first conceived of by Akira Kurosawa.
Why not to watch: Rebeca De Mornay is here for no reason at all.